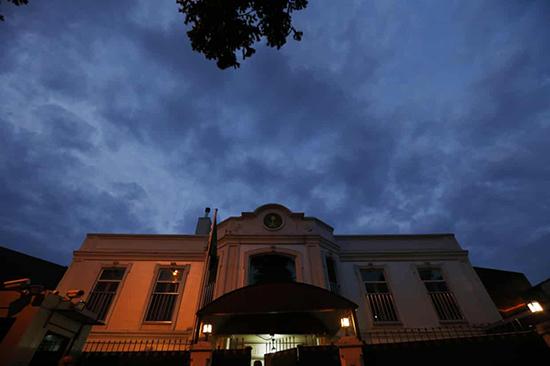 The eldest son of murdered journalist Jamal Khashoggi has left Saudi Arabia, sources close to the family have said, as the Saudi public prosecutor’s office for the first time suggested the writer’s killing was premeditated, contradicting the country’s previous claims.

Salah Khashoggi’s ashen face struck a chord with millions worldwide earlier this week after he was summoned to receive Crown Prince Mohammed bin Salman’s condolences – the man many believe ordered the assassination of his father.

The younger Khashoggi, who holds dual Saudi-US citizenship, has been barred from travelling outside the kingdom in recent months. He left the country late on Wednesday, family friends told Reuters, probably for the US.

His departure came just before the Riyadh authorities said new information from Turkey had come to light indicating that the dissident journalist’s death at the Saudi consulate in Istanbul this month was premeditated – contradicting Riyadh’s previous claims that Khashoggi was killed by accident and his death covered up by rogue operatives.

Prosecutors were interrogating suspects on the basis of information provided by a joint Saudi-Turkish taskforce, a statement from the official Saudi Press Agency said on Thursday.

Riyadh initially denied it had anything to do with the journalist’s disappearance after he visited the diplomatic mission to pick up paperwork on 2 October. More than two weeks later it said Khashoggi had been killed accidentally in a fight with Saudi officials who had embarked on an unsanctioned extradition operation.

Saudi Arabia’s shifting story has been met with scepticism by Ankara and much of the rest of the international community. The new admission raises further questions as to who in the Saudi establishment had the authority to order an international assassination operation.

Riyadh has taken great pains to distance the powerful crown prince from any responsibility for Khashoggi’s murder after it emerged several members of his personal guard and other trusted officials were involved.

Also on Thursday, the official Saudi Press Agency said that Bin Salman had presided over the first meeting of a new committee to restructure the command of the country’s general intelligence agency in light of the killing.

Addressing the matter in public for the first time on Wednesday, the prince called Khashoggi’s death heinous and painful, vowing that justice would be delivered.

Police believe Khashoggi was tortured before his death and his remains dismembered with a bone saw. His body, which Riyadh says was wrapped in a rug and disposed of by a “local collaborator”, has not been found.

It is believed Turkish authorities are in possession of powerful audio evidence, captured either from bugging the consulate or hacking Saudi officials’ communications, that proves Khashoggi was brutally murdered.

The Washington Post reported on Wednesday that Gina Haspel, the CIA director, had requested and been played the tapes during a brief visit to Ankara this week – the first indication Turkey has shared the sensitive evidence with foreign parties.

Haspel is due to brief Donald Trump on her trip later on Thursday.

In Istanbul, Turkish investigators called off for a second time a new search of the Saudi consul general’s home and garden, after permission was once again denied by their Saudi counterparts to investigate a well on the property.

The tabloid newspaper Yeni Şafak reported that the forensics team was allowed to retrieve a water sample from the site.

Police believe the journalist’s remains were driven to the nearby residence from the consulate and possibly disposed of there.