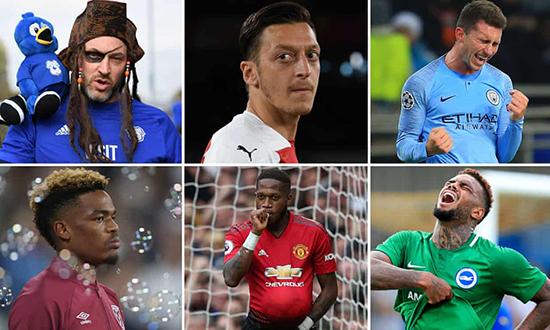 Mesut Özil has earned his stripes, Jürgen Locadia must step up for Brighton and when will José Mourinho give Fred a chance?

1) Will Fred get chance to show Mourinho his worth?

While José Mourinho continues to make ever-so-subtle digs about the quality of his squad, it is worth remembering that Manchester United have had a £52m midfielder sitting on their bench in recent weeks. There was plenty of excitement when they signed Fred from Shakhtar Donetsk in the summer but the Brazil international has not been given many opportunities to demonstrate his abilities. He has been a substitute since scoring on his last start – the 1-1 home draw with Wolves – and must be wondering what he has to do earn a place in Mourinho’s starting 11. Nemanja Matic struggled again during the midweek defeat to Juventus and looked cumbersome during last weekend’s draw with Chelsea. Perhaps Mourinho should consider giving Fred a chance to develop a relationship with Paul Pogba when United host Everton on Sunday. JS

Unai Emery’s Arsenal revolution has been built on a series of minor tweaks, slotting players into different positions to create a deep, versatile squad capable of consistency in the league and in Europe. One player who has had to adapt more than most is Mesut Özil, shifted from one wing to the other in the Premier League before Monday’s home win over Leicester. Returned to the No10 role and given the captain’s armband, Özil struggled until a goal just before half-time sparked a breathtaking individual and collective second-half display. He has surely earned the right to continue as the team’s creative linchpin at Selhurst Park, where Palace are yet to score at home this season. The challenge for Özil and Arsenal will be to unpick a stubborn home defence and extend the visitors’ winning run to 12 games. NM

3) Cardiff’s fixtures look inviting … after this one

Cardiff have played Arsenal, Chelsea, Manchester City, Tottenham and now face Liverpool, but after this game they face none of the current top six and five members of the current bottom half before Spurs visit on New Year’s Day. Indeed, the way Cardiff’s fixtures have fallen has left them with two particularly difficult periods, one from which they will emerge after Saturday, the other falling inconveniently at the end of the season, when their final seven fixtures include games against Chelsea, Manchester City, Liverpool and Manchester United. Being out of the bottom three – thanks largely to last weekend’s 4-2 win over Fulham – is significantly ahead of rational expectation and leaves Neil Warnock’s side looking ahead with optimism to the possibility a relatively enjoyable, bookmaker-confounding few months. Once they get this potentially morale-shattering fixture out of the way, of course. SB

4) Diangana can be able deputy for injured Yarmolenko

With Andriy Yarmolenko likely to miss the rest of the season after suffering an achilles injury during last weekend’s defeat to Tottenham, West Ham’s squad is starting to look stretched. Losing the Ukrainian winger is a blow for Manuel Pellegrini, especially with Felipe Anderson flitting in and out of form and Marko Arnautovic struggling to shake off a knee injury. Candidates to fill Yarmolenko’s spot on the right for Saturday evening’s trip to Leicester City include Michail Antonio and Robert Snodgrass and it will not be a surprise if Pellegrini opts for experience. But perhaps West Ham’s manager will be brave enough to give Grady Diangana another opportunity. While the 20-year-old winger is yet to start a Premier League game, he impressed in the crushing Carabao Cup win over Macclesfield Town last month and Pellegrini introduced the rookie instead of Antonio when Yarmolenko collapsed against Tottenham. JS

There will be plenty of creative talent on show at Wembley on Monday night, with Christian Eriksen and Kevin De Bruyne expected to start. Both returning playmakers will hope the pitch survives an NFL trampling the day before, but if a more direct approach is required, City may have a valuable weapon in Aymeric Laporte. The French centre-back has earned praise for his left-footed, long-range distribution to either flank, and also weighs in with the odd headed goal. City have conceded just once in their last seven games, when Laporte was switched to left-back against Hoffenheim. At centre-back, he has been imperious, tightening Guardiola’s defence and making the leaders almost as tough to break down as they are to keep out at the other end. NM

6) Locadia must show he can fill Murray’s boots

This could be a pivotal moment in Jürgen Locadia’s career at Brighton. While Glenn Murray has an outside chance of being passed fit to face Wolves at the Amex Stadium on Saturday afternoon, the expectation is that the veteran striker will be ruled out of contention after suffering a concussion in last weekend’s victory over Newcastle. Chris Hughton is likely to turn to Locadia if that proves to be the case and the Dutch forward, who has not scored since February, will need to make sure that he is ready for a difficult test. Brighton, who are looking for their third consecutive win, rely heavily on Murray for their goals and Locadia has not convinced since his £14m move from PSV Eindhoven in January. This would be a good time for the 24-year-old to end his barren run. JS

There might not be much positivity in the air when Southampton host Newcastle on Saturday afternoon. On the one hand, Newcastle’s wretched history in this fixture – one point from their last five visits, conceding 15 goals – means their long-suffering fans will expect the worst on their way to the south coast. An increasingly gloomy Rafael Benítez has already said that Newcastle need to find three worse teams in order to escape relegation, but despite the worrying statistics, his side will regard this as a fine opportunity to earn their first win of the season. Southampton have gone four league games without a goal, sit a point above the bottom three, , and their worries will increase if they cannot muster any ruthlessness against the division’s bottom side. JS

Bournemouth have made a strong start, tucked in behind the runaway top five, but there is still room for improvement – particularly in front of goal. Eddie Howe’s side have averaged an impressive 12 shots per game so far this season, but are statistically among the league’s most wasteful sides, with striker Callum Wilson particularly guilty of profligacy. They put just two of their nine shots on target in the stalemate with Southampton, and fired 14 efforts wide of goal in the 4-0 defeat to Burnley. By contrast, Bournemouth put four past both Watford and Leicester despite creating less chances than their opponents, showing what they can do when their collective eye is in. Fulham’s porous defence will surely offer up plenty of chances on Saturday – the trick is taking them. NM

9) Watford have unhappy memories of Huddersfield

In their last home game Watford were routed 4-0 by Bournemouth, and with those memories still fresh their next visitors are walking reminders of a similarly disastrous performance last December, which ended with Huddersfield winning 4-1. “Last year it was a good game for the team and for me as well,” said Florent Depoitre, whose goal at Vicarage Road was his fourth of last season – there have been two more in 27 league appearances since. “It was a really big win for us, so I am hoping we can repeat the scenario. We need to get points now.” Watford are a different proposition this season under Javi Gracia, and despite failing to win any of their last five games before last week’s 2-0 success at Wolves have performed admirably in every fixture except one; having also lost at Huddersfield last season, they have a score to settle here. SB

Chelsea have not lost in any competition since the Community Shield, while Burnley have won only twice in 16 matches this season, and last week fell 5-0 at Manchester City. But a perfect illustration of football’s unpredictability can be found in the game played between these teams on this weekend nearly a century ago, in 1921. On that occasion Burnley were the overwhelming favourites: they were league leaders and reigning champions, while a week earlier Chelsea had lost 5-0 – to Burnley. That was the ninth victory in the Clarets’ first 11 games of the season while their opponents had won just once, and Jack Cock had scored every one of Chelsea’s humble tally of six goals. But despite it all the Londoners, said the Guardian, “astonished everybody by their performance”, winning 4-1. “On the face of it there could be only one result,” wrote the Observer, but “Chelsea obliged their many supporters, some of whom had almost given them up, by giving Burnley a really good hiding.” (Unpredictability was all the rage: on the same weekend Aston Villa, beaten 5-0 at Middlesbrough the week before, thumped the same opponents 6-2 while Manchester United, who had gone down 4-1 at Manchester City, prevailed 3-1.) So, in short, it’s a funny old game. SB