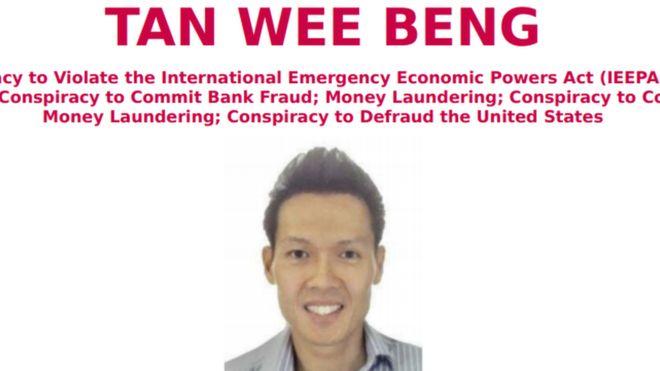 A Singaporean trader wanted by the FBI for allegedly helping North Korean entities evade US sanctions has flatly denied “all charges” against him.

Tan Wee Beng told the BBC that he had only learned of criminal charges against him via news reports.

Mr Tan, a high-profile businessman, has over several years “fulfilled millions of dollars in commodities contracts for North Korea”, the treasury department said.

An US federal arrest warrant was issued for Mr Tan on 29 August but the Department of Justice announced its indictment against him on Thursday.

He has been charged with conspiring to violate US sanctions, as well as bank fraud and money laundering.

“I found out only today through the internet. It came as a shock to me,” the 41-year-old told the BBC in a phone call on Friday morning in Singapore. He said he denied all the accusations.

“We are an international trading company, and not a front [for laundering],” he said, adding that he had instructed lawyers to defend him.

Mr Tan also disputed claims by the FBI that he was “at large”. A request for comment has been sent to Singapore police.

The US and Singapore have an extradition treaty but it only covers specific offences and does not include money laundering.

Mr Tan was once seen as a leading young Singaporean entrepreneur having been named an entrepreneur of the year in 2011 by leading accounting firm EY.

Under his stewardship, annual revenue at Wee Tiong increase by 131 percent in a decade to more than $460 million Singapore dollars ($330m), the Straits Times reported in 2015.