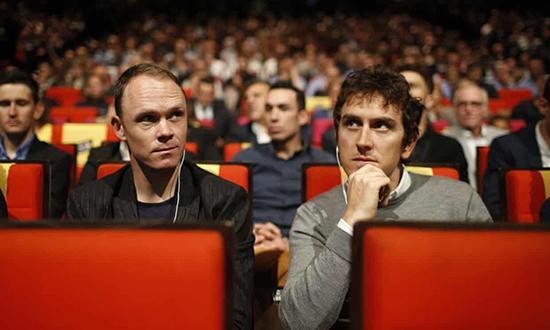 The route is designed to be more open, with more climbs amenable to attacks, and power meters could be banned. But there is little to cause Team Sky sleepless nights

In yet another attempt to make the Tour de France a more open race, which will be seen as a further move to break Team Sky’s domination, the organisers are to push for the abolition of the use of power meters. The ubiquitous device which helps a rider to gauge his effort by recording power output as he rides also “annihilates the glorious uncertainty of sport”, according to the Tour organiser, Christian Prudhomme.

It remains unclear whether this will be put in place for the 2019 edition, which looks particularly mountainous and which continues the trend towards fewer and shorter time trials. However, it is actually unlikely that the move will drastically affect Team Sky; speaking to Le Monde on Thursday, the defending Tour champion, Geraint Thomas, pointed out that he and his team train so frequently with the devices that they end up riding as much according to physical “feel” as to the readout on their screens.

Also with the aim of encouraging aggressive racing, the 2019 Tour will also include more time bonuses on key climbs towards the end of hilly and mountainous stages – in addition to the bonuses on offer at the finishes – while the organisers will lobby the governing body, the UCI, for the intermediate bonuses to be higher than during the 2018 event.

That follows the reduction in team size from nine to eight, another step widely seen as an attempt to curb Team Sky but which did little to change the outcome of the 2018 race. The principal beneficiary of the bonuses this year was Thomas, who banked them like a squirrel hoarding nuts for the winter.

The 2019 Tour route contains little that will cause sleepless nights for the British team who have dominated six of the last seven races, winning with Bradley Wiggins, Chris Froome and Thomas. The inclusion of a single 27km individual time trial – there is also a team time trial of similar length – will be mildly frustrating for the Dutch specialist Tom Dumoulin, the more so as its inclusion nine days from the finish, with the heavy mountain work in the Pyrenees and Alps still to come, means the climbers will have ample time to recoup any losses.

The questions for Team Sky will revolve less around the route than around their two competing champions: it is unclear whether Thomas will be able to replicate the immense physical and mental effort that it took for him to achieve his best climbing form ever, while Froome will be 34 when the 2019 race starts. The volume of climbing will suit this year’s discovery, LottoNL’s Primoz Roglic, while another open question is how much Dumoulin can improve if he concentrates solely on the Tour, as he said he intends to.

On paper, the route is best suited to Froome, simply because of the volume of repeated climbing, which is greater than in any recent Tour, with more ascents over 2,000m and a record 30 major ascents; the bulk of the climbing is packed into the final eight days’ racing between the time trial in Pau and the summit finish on the final Saturday at the Val Thorens ski resort.

Pau also provides the route for La Course, the women’s race run alongside the men’s Tour since 2014. There is no hint of it becoming a true equivalent of the men’s Tour and the organisers are still seeking a definitive format for the event; in 2019 it will consist of five laps of the time trial circuit, on what should be a punchy route including five climbs of the Côte d’Esquillot.

For the 2018 Vuelta a España winner, Simon Yates, the shorter, steeper climbs of Spain look more suitable, along with the less controlled style of racing that is seen in the Giro d’Italia. It might well be that having looked at this route Yates will go with his “gut feeling” and look to complete this year’s unfinished business in the Italian Tour.

There are three summit finishes over 2,000m, on the Col du Tourmalet in the Pyrenees and at Tignes and Val Thorens, with Tignes coming on the final Friday. The three days in the Alps look particularly brutal, with day one crossing over the Col du Galibier and finishing in Valloire, a descent so brief that this will feel akin to a summit finish.

What is equally striking, however, is the comparative lack of flat roads, with only six stages for the sprinters, and – as well as six days in the Alps and Pyrenees – four vicious stages through the Vosges and Massif Central, including a fourth finish on the steep ascent to the Planche des Belles Filles ski station, with a short section off-road at a gradient of more than 20%.

The paucity of sprint stages will make this a tough Tour to control, which is precisely what the organisers have been seeking every year since 2012.

Since 2011, they have been largely unsuccessful, but 2019 could be the exception. After all, hope springs eternal in Paris in October.