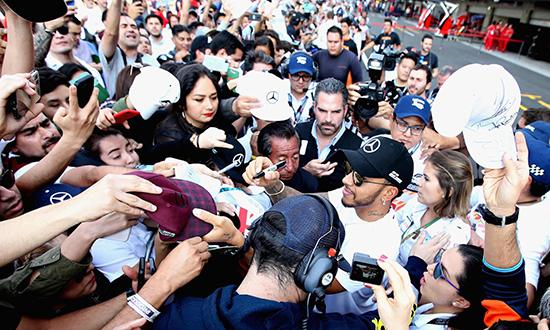 Ten years since Lewis Hamilton won his first Formula One world championship he is almost certainly but days from a fifth. He goes into Sunday’s Mexican Grand Prix as already the most successful British driver and will likely emerge from the grand, noisy, colourful maelstrom of the Autódromo Hermanos Rodríguez behind only Michael Schumacher in the record books and level with Juan Manuel Fangio. The Mercedes man is taking nothing for granted but ominously for his competitors he suggested in Mexico he now has his sights set on greater glories.

Hamilton has to finish only seventh to secure his fifth title, while Ferrari’s Sebastian Vettel must win just to stay in the game. Hamilton was the champion elect at the previous grand prix in the US but a combination of car problems and strategy calls denied him a coronation. Nothing short of a DNF is likely to do so on Sunday and, if he does close it out, he will have equalled Fangio and stand only two behind Schumacher.

Hamilton took his first F1 title for McLaren in 2008 in his second season but did not win another until 2014, a year after he had switched to Mercedes, a move considered questionable at the time but has since proved positively prescient.

Two further championships followed but he has always been reticent to suggest how far he can go. In Mexico, however, when asked how he felt now, a decade on from that first title, he gave an emphatic indication he is more motivated then ever.

“I’ve still got more to do. There are so many different things that happened in that time and I waited a long time to get the second,” he said. “I could easily have stayed where I was and I wouldn’t be sitting here with the ones I have now. It’s been interesting, the journey and the different decisions I have taken, but I am very grateful for the route I have been on. I feel incredibly fortunate to be in the position I am in but I feel like I have quite a lot left to do.”

He has always denied targeting Schumacher’s record but with his contract with Mercedes set to run until the end of 2020, it is hard not to imagine he must believe it is achievable. Hamilton is 20 wins behind the German’s record of 91 and between 2014 and 2017 he has averaged 10 a year, with nine this season already.

It is an extraordinary achievement, unimaginable to the 22-year-old who took to the grid in 2007. He showed such huge promise then, but now 33, has developed into one of the most complete drivers of his generation. This season he has driven as well if not better than at any point in his career.

When he started out, when his father, Anthony, and McLaren’s Ron Dennis would have been his sounding boards, Hamilton now confers with other greats of this era. “You can take something from other athletes’ experience,” he said. “They understand the physical and mental side of what you are doing. Earlier this year I was messaging Serena [Williams] when she was at Wimbledon, picking her brain, ‘How do you prepare.’ She would say: ‘Only you know what I am going through.’ That is quite a cool relationship to have with someone.”

He has been on an exceptional run of form to reach this position, winning six of the seven races before the US Grand Prix, and there is no reason to think he and Mercedes will not conclusively finish the job in Mexico. Their car has been almost bulletproof this year, with only one DNF for Hamilton after a fuel-pressure problem in Austria. His lowest finish was fifth in Canada, one of only three races in which he failed to claim a top-three spot.

These are results that reflect the special place he occupies as a sportsman, something in which he is revelling. “Even though you’re improving, the competition improves, different circumstances arise,” he said. “But this year particularly has been one of the most enjoyable years with the things that I have been faced with. So if I were to win the title, I think it would definitely be one I would be probably most proud of and be able to appreciate most.”

Finishing with a win is far from a given. Ferrari enjoyed the better pace in Texas, where Kimi Räikkönen won after they rolled back upgrades brought to the car since Singapore, and they will expect to be strong again in Mexico, where Red Bull also will be competitive. The thinner air owing to the altitude of Mexico City helps reduce the power disadvantage of Red Bull’s Renault engine and they have targeted the race as one where they expect to compete at the front.

Red Bull did indeed prove quick out of the box. Max Verstappen topped the timesheets with Daniel Ricciardo in second in both practice sessions. Hamilton was in seventh on his qualifying simulation in the afternoon with his team-mate Valtteri Bottas in ninth, while Vettel was in fourth with Raikkonen in eighth in practice two.