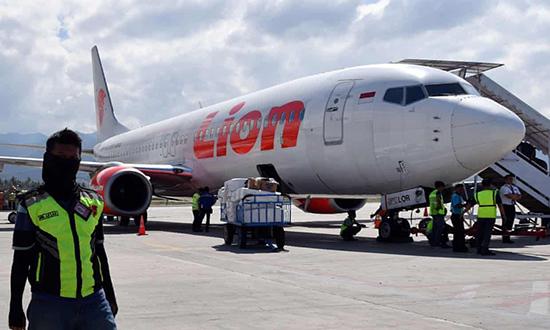 Kate Lamb in Jakarta and agencies

A passenger plane carrying 188 people has crashed into the sea off Jakarta, minutes after take-off.

“It has been confirmed that it has crashed,” Yusuf Latif, a spokesman for the country’s search and rescue agency, said on Monday by text message, when asked about the fate of the plane.

Flight JT610 lost contact with the ground 13 minutes after take-off, according to an official. The jet was a Boeing 737 MAX 8, which can carry up to 200 passengers, according to air tracking service Flightradar 24.

A search and rescue effort has been launched for the plane, which departed Jakarta about 6.20am on Monday. It was scheduled to land at Pangkal Pinang at 7.20am.

Reports received at Tanjung Priok port in North Jakarta indicated the remains of the plane had been spotted.

Wreckage had been found near where the plane lost contact with air traffic officials on the ground, said Muhmmad Syaugi, the head of the search and rescue agency.

“We don’t know yet whether there are any survivors,” Syaugi told a news conference, adding that no distress signal had been received from the aircraft’s emergency locator transmitter.
“We hope, we pray, but we cannot confirm.”

A vessel traffic officer, Suyadi, told the Jakarta Post that at 6.45am he received a report from a tugboat that had identified a downed plane.

“At 7:15am the tugboat reported it had approached the site and the crew saw the debris of a plane,” Suyadi told the Post. There were no reports about the passengers on board.

A tanker and cargo ship were approaching the site and a search and rescue vessel was also en route.

Debris thought to be from the plane, including aircraft seats, was found near an offshore refining facility in the Java Sea, an official of state energy firm Pertamina said.

An official of Indonesia’s safety transport committee said he could not confirm the cause of the crash, which would have to wait until the recovery of the plane’s black boxes, as the cockpit voice recorder and data flight recorder are known.

“We will collect all data from the control tower,” said Soerjanto Tjahjono. “The plane is so modern, it transmits data from the plane and that we will review too. But the most important is the blackbox.”

The accident is the first to be reported that involves the widely-sold Boeing 737 MAX, an updated, more fuel-efficient version of the manufacturer’s workhorse single-aisle jet. The first Boeing 737 MAX jets were introduced into service in 2017.

Boeing is aware of the airplane accident reports and is “closely monitoring” the situation, it said on social network Twitter.