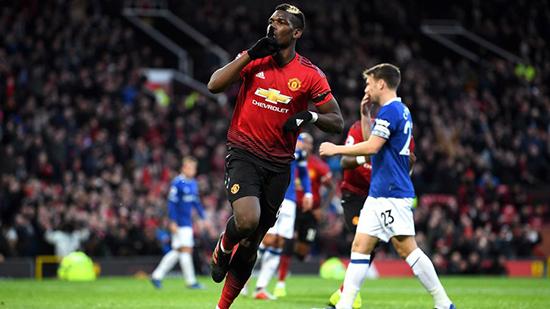 A review of Sunday’s action in the top flight.

Manchester United bounced back from their Champions League defeat against Juventus to beat Everton 2-1 at Old Trafford.

Paul Pogba and Anthony Martial were on target for United before Gylfi Sigurdsson gave Everton hope with a 77th-minute penalty.

The Belgium striker had gone eight games without a goal and Marcus Rashford started in the centre-forward role.

Pogba gave United a 27th-minute lead after Martial had tumbled theatrically in the penalty area under Idrissa Gueye’s challenge.

After a trademark stuttering run up, Pogba saw his spot-kick saved by Jordan Pickford but the rebound fell kindly for him to give United the lead.

Pogba set up the second for the excellent Martial four minutes after the break, the winger sending a wonderful curled effort past the helpless Pickford from 20 yards.

Bernard should have reduced the deficit but he shot into the side netting after rounding United goalkeeper David De Gea.

Everton did pull one back when Pogba’s showboating allowed Richarlison to race into the area and Chris Smalling was punished for needlessly going to ground.

Sigurdsson stroked home the spot-kick but United held on in a nervy finish to climb above Everton into eighth.

Arsenal had looked on course to record a 12th consecutive win in all competitions after a superb Granit Xhaka free-kick and a controversial Pierre-Emerick Aubameyang strike had cancelled out Milivojevic’s penalty on the stroke of half-time.

But the Palace captain, who missed from 12 yards in the defeat at Everton last weekend, made no mistake in securing a 2-2 draw when referee Martin Atkinson awarded the hosts a second penalty of the afternoon.

The goals were the first scored at home in the league by the Eagles this season and earned them a share of the spoils against an in-form Arsenal side who had again started the game slowly.

It was a sombre start to the afternoon in south London, both clubs paying respect to those affected by the helicopter crash at Leicester City the previous evening.

The players sported black armbands and there was warm applause from everyone inside Selhurst Park in the build-up to kick-off.

Chelsea shrugged off the absence of Eden Hazard to hand Burnley another heavy defeat.

Eight days after conceding five at Manchester City, Sean Dyche’s side endured a second chastening afternoon against one of the Premier League’s alpha teams, losing 4-0 at Turf Moor.

Alvaro Morata had a host of chances in the first half and scored the opener in the 22nd minute while Ross Barkley, rewarded for his late equaliser against Manchester United last weekend with a start, and Willian added long-range efforts in the second half.

Substitute Ruben Loftus-Cheek capped one of the best weeks of his career with a very late fourth.

The result lifted unbeaten Chelsea back above Manchester City, who face Tottenham on Monday, and to within two points of leaders Liverpool.