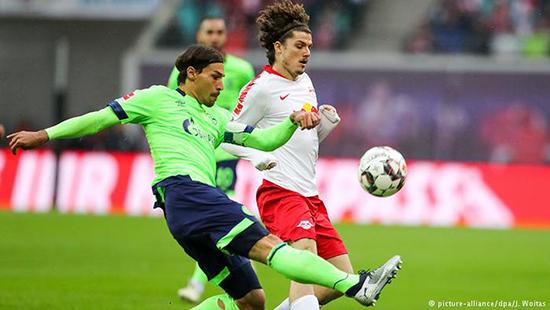 On the face of it, a point away at RasenBallsport Leipzig isn’t a bad result, but Schalke’s goalless draw provided precious few answers to the questions surrounding the team. And there are many of them.

The Royal Blues may have halted their disastrous early-season form which saw them lose their opening five matches, but it’s difficult to speak of a real improvement. The subsequent four games have yielded only seven points and the goals scored column still contains a measly five – the joint worst attack in the league.

So why aren’t Schalke scoring? Is it the players, the tactics or a combination of both? Or perhaps just bad luck – after all, only Sunday’s opponents RB Leipzig have hit the woodwork more often than Schalke this season.

Since arriving for six million euros from Werder Bremen three years ago, Franco Di Santo has scored a disappointing five goals in 71 appearances – a frankly unacceptable record. The Argentinian was omitted from the Schalke squad which travelled to Istanbul in the week for another 0-0 draw.

Breel Embolo is one of only five Schalke players who have found the net this season but is still guilty of missing big chances, including a free header from just six yards out in Leipzig on Sunday. Guido Burgstaller’s 26 goals since joining from Nuremberg represent a respectable return but constructing an attack around the 1.87 m (6ft 1.5in) Austrian hardly smacks of great imagination.

Mark Uth scored 17 times for Hoffenheim last season and had scored four in four vs RB going into Sunday’s game, but is yet to open his account for his new employers and has now gone 835 minutes without a goal.

In the absence of any particularly agile forwards, Schalke’s forays forward tend to be slow, hesitant affairs with genuine pace and creativity only really injected by Yevhen Konoplyanka or Daniel Caligiuri from the flanks. Otherwise, an explicit offensive plan is difficult to identify, and responsibility for that lies with Domenico Tedesco.

The 33-year-old cut an impressive figure as he re-organized Schalke’s leaky defense last season, leading the Royal Blues to second place. But goals were still at a premium as Schalke scored the fewest of all top six sides.

Still, strikers require service – and that’s difficult with a pass completion ratio of just 53% from only 276 attempted passes, as it was on Sunday.

“The numbers don’t reflect our match plan,” insisted Tedesco afterwards to German broadcaster Sky, explaining that his team had aimed to avoid losing the ball in central areas where teams are most susceptible to Leipzig’s dangerous counterattacks. “We had a good plan and we’re absolutely satisfied with the result.”

Speaking on Sky, former Bayern Munich and Germany midfielder Dietmar Hamann didn’t agree. “When you play almost every second ball to the opposition, that has nothing to do with the Bundesliga. If that’s the expectation then we may as well pack up and go home. That was an atrocious game.”

“I don’t understand the criticism,” responded sporting director Christian Heidel. “We haven’t won any beauty prizes today but that wasn’t our aim. We’re down the bottom [of the table] and we’re gaining points to work our way out – then we can think about playing nice football.”

Forty-eight hours previously, Hertha Berlin coach Pal Dardai had expressed a similar sentiment ahead of his team’s draw with Borussia Dortmund. “How can successful football be bad football?” the Hungarian had asked.

That’s easy to say when you’re sixth, but Schalke are still fifteenth. That’s neither attractive nor successful.