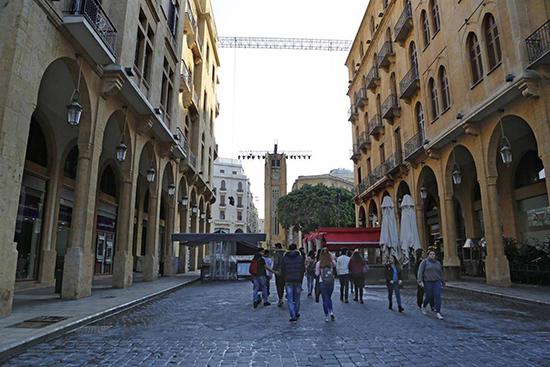 This has caused the closure of many familiar businesses, a process that has been accelerating the last few months.
by Dan Azzi

BEIRUT: Recently, EuroCost International’s 2018 cost-of-living survey for expatriates reported that Beirut was the seventh most expensive city in the world, which came to mind this morning at a coffeeshop founded in Seattle, with franchises all over the world.

I noticed an anniversary edition of their coffee priced in Sassine Square for around $15 and in Cyprus for $8.60. This is especially egregious when you compare per capita incomes, adjusted for Purchasing Power Parity (PPP), in Cyprus of $34,000, to ours which is below $15,000, i.e. equivalent to being four times as expensive here.

For those of you who don’t know, PPP is basically an economic concept that “scientifically” transforms nominal (or exact) income to the purchasing power in a specific country — the idea being that $1,000 in Karachi goes much further than $1,000 in New York. What is the real per capita income in Lebanon? The easiest way to calculate this would be to just divide the GDP (of around $52 billion) by our population of 4.3 million, i.e. $12,000, but wait a minute. What about all the Syrians, Palestinians, South Asians, Africans, and others who live here? So we should add around 2 million to the population, giving us a per capita income of $8,300. So the World Bank PPP-adjusted income is saying that a dollar in Lebanon would buy 50% more in an average country.

That’s news to any Lebanese who has traveled pretty much anywhere in the world, and compared prices of clothes, electricity, mobile phone, internet, cars, housing, and so on. If anything, the PPP income in Lebanon should be adjusted DOWN not up. In fact, it’s probably news to the World Bank staff stationed in Solidere and I suggest that they make the international staff, who visits them from other locations, pay for the lunches or dinners, or taxi from the airport, so they adjust their PPP multiplier.

Other than making their PPP estimates more accurate, it might help them increase their COLA (cost of living allowance) here. You’ve probably witnessed the low occupancy rates in restaurants recently, where, often, the patrons order cheap stuff, with a long meandering shelf-life, like a coffee and arghile.

This has caused the closure of many familiar businesses, a process that has been accelerating the last few months. In downtown, a cappuccino will run you $7-8. If the place is empty, Economics 101 tells us his prices are too high, so why doesn’t he reduce them?

The only rational explanation is that his fixed costs are too high, of which the largest components are rent and staff. Of course, any supplies he buys are similarly overpriced. A place that recently closed in Zaitouna Bay was being charged $40,000 per month in rent. Yes, that wasn’t a typo — per month, not year. To give you a frame of reference, for that amount, you could rent a joint in San Marco Piazza in Venice, which receives 30 million paying, not merely selfie-taking, tourists per year.

Another place owned by a friend of mine downtown used to pay $360,000 per year in rent. Today, he pays $70,000 (an 80% reduction), because the landowner has witnessed the fate of his neighbors who remained obstinate about not reducing rent — vacant for 7 or 8 years.

Another place in Sioufi, about half the size, is paying almost $150,000 a year in rent. So the market is so contorted that a place twice as big in the fanciest neighborhood in town is renting for half the amount in a bland neighborhood, with surrounding buildings still riddled with bullet holes from the civil war era … even though it should be the opposite, based on the theoretical purchase price of the establishments.

The Sioufi landlord hasn’t reduced, because after the last guy went bankrupt, another businessman, assuming that the first guy failed because of bad business acumen (and that he’s smarter, of course), decides to rent the same place, paying the same ludicrous amount, and now hopes to turn things around. The other factor in the excessive pricing are monopolies, collusion, and lack of transparency.

The concept of a sole distributor (“Wakil Hasri”), which is banned in the US or Europe (or in any free market economy, due to anti-trust laws), reduces competition. So, for example, if you lived in Boston and wanted to buy a certain car brand, and were willing to drive an hour, you’d have some fifty dealers from which to choose.

Here, you only have one guy, so basically, either you buy his brand, or you switch brands, and since the other brand also has an artificially high margin (as the sole distributor of that brand), then you just have to pay his price. The best example is the private electric generator supplying your neighborhood.

Did you ever notice there’s always only one per neighborhood? The most common example illustrating the lack of transparency is the real estate sector. Let’s say you’re a typical buyer. You’re probably a young, first-time homebuyer. This is probably the biggest purchase of your life. You’re probably borrowing the money on Iskan. How do you know the right price to pay?

There’s no Zillow or MLS listing which in seconds gives you the exact price in the building you’re looking at, as well as the price history of every apartment. So your starting point for any negotiation is seller’s advertised ask price. The seller is probably a developer who’s sold dozens of apartments, making negotiating with him basically like a boxing match with Mike Tyson. Who do you think will win that bout?

An illustration of collusion is the fact that the whole country was for years speaking with one voice how property prices haven’t dropped or never drop, even though the top of the bubble was in 2010, by any objective or mathematical measure, like sales volume. This happened with the acquiescence of the media, either through negligence or out of concern for advertising dollars.

Basically, every single person who bought an apartment after 2010 has lost money, the minute he signed the contract. The best example of collusion are airline prices.

Ever wonder why a flight to Europe is around $500-600. Even a twenty-minute flight to Cyprus is normally $300-400, while a much longer flight within Europe goes for $100-200. This is because there’s usually only two flights servicing any city in Europe, and the “competing” foreign airline has adopted our bad habits and price themselves within $25 of our airline for any flight originating in Beirut.

Of course, the reverse flight, originating in Europe, would be cheaper, because there they’re subject to European fair competition laws, so they wouldn’t dare play this game. Even a flight from Beirut to New York is around the same as a flight to Europe, even though it has a stop in Europe. Nobody would dare play games with the Americans who have no qualms applying their laws extra-territorially.

With the country getting more and more expensive, as a larger chunk of people’s incomes goes to housing, schools, utilities, and other essentials, this leaves barely any disposable income.

Thus, if someone were frugal enough to manage to save some money, would she spend it here in Lebanon, or fly to Turkey, Greece, or the rest of Europe, and spend it there?

Dan Azzi has recently been invited to be an Advanced Leadership Initiative Fellow at Harvard University, a program for senior executives to leverage their experience and apply it to a problem with social impact. Dan’s research focus at Harvard will be economic and political reform in a hypothetical small country riddled with corruption and negligence. Previously, he was the Chairman and CEO of Standard Chartered Bank Lebanon.