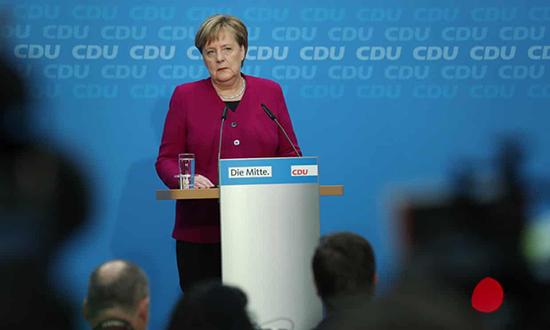 Over the past three years I’ve received many calls from the British media asking me whether Angela Merkel had finally received a knockout blow. And I’ve always replied: she’s down but not out. Now, however, she’s down and out. Her party’s top brass have forced her to announce that she won’t be running for the leadership of the Christian Democratic Union (CDU) at their conference in December. At the time of writing, she wants to remain chancellor. But by this time next year at the very latest, she’ll be out of that job, too.

Sunday’s elections in the state of Hesse were the final straw. The CDU lost 11.7 percentage points of the votes in a contest dominated by national issues. Some 50% of voters polled said they wanted to send a “protest message” to Berlin. The message has been received. Merkel’s party is scrambling to abandon her.

It’s late in the day. In the general election in September 2017 Merkel’s CDU and its Bavarian sister the CSU (referred to collectively as “the Union”) lost 8.6% compared with 2013. The Union’s losses were equivalent to the gains of the far-right Alternative für Deutschland (AfD). Many inside the CDU called for the party to revert to a more conservative profile. But Merkel did the opposite, attempting to cobble together a “Jamaica” coalition with the Greens and the liberals of the Free Democratic Party (FDP). When the FDP walked out of the talks, Merkel had to continue the “grand coalition” with the Social Democrats (SPD), which neither side really wanted. Since then, the Union and the SPD have been haemorrhaging votes, while the AfD have managed to gain seats in all 16 regional parliaments as well as the Bundestag.

With the country moving to the right, the remedy seems simple: the Union has to follow. But in regional elections in Bavaria earlier this month, the CSU, which had tried just that, were clobbered, too. People who have abandoned the Union for the far right are not going to be won back easily. On the other hand, young people are voting for the Greens, whereas the AfD is still a party of disgruntled old white men. So if the Union moves so far to the right that a coalition with the ascendant Greens becomes impossible, Merkel’s successor might find him or herself in a situation where the only viable option is an alliance with the AfD.

The Austrian chancellor, Sebastian Kurz, has shown that a government can be formed in this way: his People’s party is governing with the far-right Freedom party. But Germany is not Austria. Given the AfD’s scepticism not only towards the Euro and the EU, but also towards Nato and “globalism”, a rightwing bloc of the CDU and the AfD would be an existential danger for the western alliance.

Merkel has been grooming Annegret Kramp-Karrenbauer (AKK, as her admirers call her) as her successor. AKK comes from Saarland, sandwiched between Germany and France, which traditionally produces pro-European politicians. As a Catholic of the Pope Francis stripe, AKK combines social conservatism with liberal immigration policies and a concern for the “protection of creation” which allowed her to form the first “Jamaica” coalition with the FDP and the Greens when she was minister-president of Saarland. AKK would be a symbol of continuity, but in a post-Merkel CDU that just might be a liability.

Friedrich Merz was an early casualty of Merkel’s rise to power, and he’s been nursing his grievances for the past decade while making oodles of money as a lawyer. Merz, who has a brilliant mind and great rhetorical abilities, is a fiscal conservative and a law-and-order figure. He is a leading light in Atlantik-Brücke, a network of pro-American business leaders, politicians and media people. In a way, he is a throwback to the era of Helmut Kohl, and while this endears him to the party’s old guard, there’s a sense of deja vu about his candidacy that works against him.

Finally there’s Jens Spahn, the poster boy of the CDU’s young rightwingers. Spahn is gay and an unabashed nationalist, hitting out at Berlin coffee shops where “nobody speaks German”, deploring the “disruption of the state” caused by Merkel’s immigrant policy and the “anti-gay, misogynistic and antisemitic” attitudes he attributes to immigrants from Arab countries. As Merkel’s health minister he’s been seen to perform well on issues such as care of the elderly. But he has repeatedly and pointedly cosied up to Kurz, whom he sees as a role model. If Spahn does become party chief and then chancellor, it could be a further step in Germany’s seemingly unavoidable slide into nationalism. Not good news for post-Brexit Europe.