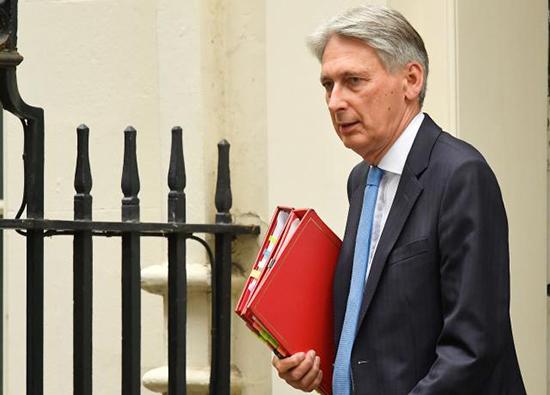 Philip Hammond has said the “era of austerity is finally coming to an end”, in his last Budget before Brexit.

He spent a windfall from better public finances on more money for universal credit and bringing forward planned income tax cuts by a year.

Jeremy Corbyn said whatever Mr Hammond had claimed, “austerity is not over”.

In a speech lasting more than 70 minutes, Mr Hammond said “we have reached a defining moment on this long, hard journey” after repairing the damage to the public finances.

He described it as a Budget for “the strivers, the grafters and the carers,” promising them a “brighter future” after years of constraint.

He announced a slight increase in growth forecasts, from 1.3% to 1.6% for 2019, and better-than-expected borrowing figures.

What were the main announcements?

Mr Hammond also announced a planned new tax – subject to consultation – on the profits generated in the UK by global online “giants”, such as Facebook, which he said would come into effect in April 2020 and raise £400m a year.

The chancellor announced an extra £2bn for mental health services in England, as part of the £20bn boost to the NHS announced by the government in June.

He also unveiled an additional £400m to allow schools to “buy the little extras they need”.

Media captionJeremy Corbyn: “This is a broken promise Budget”

Labour leader Jeremy Corbyn said: “What we’ve heard today are half measures and quick fixes while austerity grinds on.

“And far from people’s hard work and sacrifices having paid off, as the chancellor claims, this government has frittered it away in ideological tax cuts to the richest in our society.”

Labour said the extra money for mental health would “do little to relieve the severe pressures” on services caused by the government’s “relentless underfunding of the NHS,” and the extra £20bn for the health service in England was not enough.

Chancellor says schools need “little extras” when headteachers are begging parents for donations to cover textbooks and stationery. Schools have been cut by over £2bn since 2015 – today they get less than a fifth back and he tells them to be grateful! #Budget2018

The chancellor had been under pressure from Labour and some Tory MPs to put more money into universal credit, amid warnings it could push people into destitution.

He announced an extra £1bn over five years to help those moving to the new payments, which will replace six in-work benefits, and a £1,000 increase in the amount people can earn before losing benefits, at a cost of up to £1.7bn a year.

He claimed the changes – reversing cuts made in previous Budgets – would make 2.4 million working people and people with disabilities £630 a year better off.

Labour said the entire Budget should be voted down unless the government agreed to halt the roll-out of universal credit.

The dust hasn’t quite settled but we’re a good few hours on from when the chancellor squeezed himself back down onto the government front bench, in between a pleased-looking prime minister and his ever-enthusiastic colleague Liz Truss, his number two at the Treasury.

A few hours when certainly not everything has become clear, no doubt a few nasties will crawl out from under the rocks through the course of tomorrow according to Budget tradition, but the broad shape of the Budget and its impact are becoming clear.

Mr Hammond warned at the weekend that an emergency Budget would be needed if Britain leaves the EU in March without a deal.

However, Downing Street has said all spending plans in this Budget will go ahead “irrespective” of Brexit.

The big long-term spending decisions will be made next year, after Britain’s scheduled departure from the EU.

Mr Hammond said overall spending would go up by 1.2% over the next five years.

But Treasury officials said this was not a guide to next year’s spending review because more money could be available if the UK gets a deal with the EU.

And, they added, there was £4.2bn in reserve for a no-deal scenario so it was likely spending would go up whatever happened, although the 1.2% figure included the extra money for the NHS.

Mr Hammond has said his Budget was based on the assumption of an “average-type free trade deal” being agreed between the UK and the EU.

He said he was holding back some “fiscal” headroom in case he needed to alter his economic plan if Britain leaves the EU without a deal – but that a Brexit agreement with Brussels would result in a “deal dividend” for the economy.

What the economic experts are saying

Paul Johnson, of the Institute for Fiscal Studies, told the BBC: “Arguably he’s just about got to the absolute minimal definition of ending austerity but it’s certainly nothing like a bonanza for the rest of the public services”. He added that “most of the planned welfare cuts are still on the books”.

The Office for Budget Responsibility said the chancellor had decided to spend a “windfall” from better employment and tax receipts on a “near-term tax and spending giveaway”, in addition to the extra £20bn promised for the NHS by Theresa May.

“This leaves the medium-term outlook for government borrowing little changed since March”, with the government still committed to balancing the nation’s books by 2025.

What have business and the unions said?

The SNP’s Westminster leader Ian Blackford said austerity would remain under the Conservatives, and claimed the Budget leaves Britain “wholly unprepared” for Brexit.

He said Scotland’s budget “will have been slashed by £1.9bn since the Tories came to power”.

Lib Dem leader and former business secretary Sir Vince Cable said: “With growth remaining stubbornly low and Brexit weighing down our economy, it is clear the big problems are still to be tackled.

“It was a sticking plaster Budget, when major surgery lies ahead.”

Plaid Cymru said it was a “fantasy pre-Brexit Budget based on imaginary numbers”, saying Wales remained “an afterthought for Westminster”.