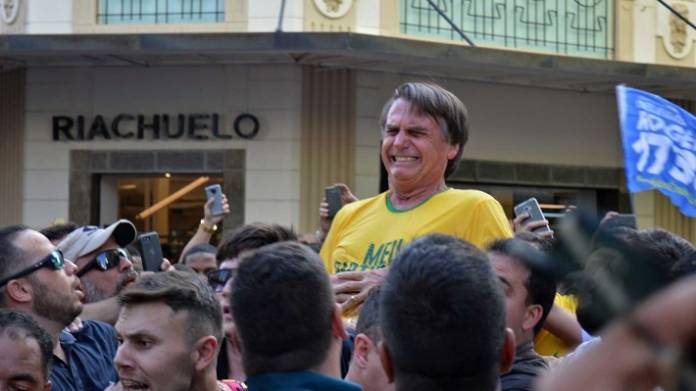 The world’s fourth largest democracy, Brazil, has elected congressman Jair Bolsonaro as its next president.

Bolsonaro ran a campaign on “a handful of promises that strike a chord with the majority of the Brazilian electorate: a tougher take on crime, radical economic reform to curb unemployment and falling incomes, a conservative turn in social mores, and unquestioned support for anti-corruption measures”, says Foreign Policy’s Matias Spektor.

In a country where support for political parties and democratic norms has dramatically dropped off, Bolsonaro has “cleverly tailored a message that appeals to the few institutions that still command popular respect: the family, the church, and the Armed Forces”, he adds.

So how will “South America’s Trump”, as he has become known, change Brazil?

For security and policing

Bolsonaro’s victory was built in large part on his strongman credentials. He has in the past supported former South American dictators, saying in 1998 that Chile’s Augusto Pinochet “should have killed more people”.

He has also supported the use of torture against criminals and has spoken favourably of killing squads and relaxing gun control laws. “If I get there, as far as I’m concerned, every citizen will have a firearm in their home,” he said last year.

Bolsonaro’s choice for vice-president, retired army general Antonio Hamilton Mourao, has “refused to rule out the possible return of military rule and openly talked about a military coup in the past”, says HuffPost.

The weekend before the election, Bolsonaro pledged a “cleansing never before seen in Brazil” and said that “red thieves” – by which he meant his political opponents – would be “banned from the country”.

“They can either get out or go to jail,” he said in a video shown to supporters at a rally in Sao Paulo.

Following his victory, Bolsonaro “said the words investors wanted to hear”, according to Bloomberg, as he pledged to trim the deficit, pay down debt and reduce the size of government.

Much of his electoral success with wealthier Brazilians has come from his appointment of the University of Chicago-trained economist Paulo Guedes, “who has made wild promises about a maximalist neoliberal agenda”, says Foreign Policy’s Spektor.

Under Bolsonaro, Guedes will lead an economy super-ministry with responsibility for finance, planning and trade. Bolsonaro has said within his first year he wants to reduce public debt by 20% through a raft of privatisations and the sale of state properties.

Many of Guedes’s proposals “are vague, but sensible in principle and overdue”, says The Economist. They include “cutting the deficit and the public debt and reshaping public spending”, the newspaper adds. But in many of these things “Bolsonaro may be his opponent and Guedes may not last long”.

Bolsonaro has said he will likely try to roll back gains made by the most marginalised communities.

“The goal of Bolsonaro is to overturn every single victory social movements have achieved since the return to democracy and every single victory workers have won over the last 80 years,” James Green, director of Brown University’s Brazil Initiative programme, said recently.

Bolsonaro has also strongly opposed the legalisation of abortion. Writing on Twitter earlier this month he said: “The money of Brazilians will not finance NGOs that promote that practice.”

On social issues he “tried to soften his tone towards the end of his campaign”, says Yahoo News. In his final campaign speech on Facebook, he said: “We want a free Brazil, without prejudice: white or black, homo or hetero…. Who knows, maybe I’m gay. If I were, what would be the problem?”

But the new president “has made openly racist, homophobic, and misogynist statements in the past”, says Human Rights Watch. The organisation notes he has compared Afro-Brazilians to cattle; called refugees “the scum of the earth”; said he would rather have a son die in an accident than be gay; and told a congresswoman he would not rape her because she was “very ugly”.

Bolsonaro has been a staunch critic of the global fight against climate change. During the campaign he proposed closing the country’s environmental agencies, eliminating fines for illegal logging, removing Brazil from the Paris climate accords and continuing to open up the Amazon rainforests for destruction. Although Bolsonaro has since rowed back on the Paris accord pledge, his chief of staff, Onyx Lorenzoni, and other allies “have challenged global warming science”, reports The Guardian.

“We have a serious risk of seeing the deforestation explode and an increase in violence,” Marcio Astrini, the public policy director at Greenpeace in Brazil, told the paper.