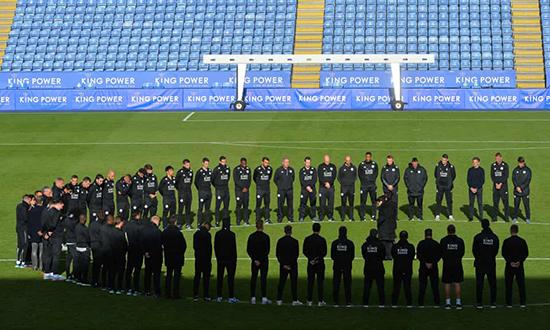 Shortly after lunchtime on Monday Leicester City’s players began to huddle around the centre circle of the King Power Stadium. It could almost have been a typical routine before kick‑off. Except that on this bleakest of autumnal days their heads were bowed as they stood statuesque and silent.

As the players watched, the club’s vice chairman, Aiyawatt Srivaddhanaprabha, laid a wreath on the centre circle as a tribute to the five people killed – including his father Vichai – in a helicopter crash after Leicester’s match against West Ham on Saturday. And then he went to each of his squad and quietly hugged them.

The hugs back were just as warm, and they also lingered. There was a sense of here of a family loved, and a sadness willingly shared.

Later the players joined the hundreds of supporters outside the stadium – young and old, dazed and confused – and stood in silence for five minutes. Usually there are barriers and security guards between football stars and supporters. This time, however, the congregation was joined as one, united in grief.

And when the players, all clad in black, finally departed, the crowds started to applaud. At that point the goalkeeper Kasper Schmeichel put his arm around Aiyawatt, who then grasped his hands together in prayer. Jamie Vardy and Harry Maguire were visibly moved as they paid their respects.

The expectation is that the match away at Cardiff on Saturday will go ahead. It is also likely that Aiyawatt will replace his father as chairman. But they are questions the club understandably wanted to postpone for another day. Monday was about paying tribute to Vichai, the polo-playing Thai billionaire who had taken Leicester from the Championship and into the land of fairytale.

The Duke of Cambridge led the tributes to Vichai, saying he was “lucky to know him” and adding: “He was dedicated to his family and supported a number of important charitable causes. He made such a big contribution to football, not least through Leicester’s magical 2016 season that captured the imagination of the world.”

Outside the stadium hundreds more paid tribute with flowers, shirts and thank-you messages all placed in front of a large picture of Vichai. Some of the comments left were for the pilots Eric Swaffer and Izabela Lechowicz who also died when the helicopter spiralled when its tail rotor apparently failed – yet may have saved hundreds of lives by crashing in a car park away from crowds of supporters. Two of Vichai’s staff, Kaveporn Punpare and Nursara Suknamai, also died in the crash.

All day there was a disconcerting buzz of a broadcast helicopter overhead. And as harrowing CCTV videos emerged online of the crash, with the helicopter seeming to clear the King Power Stadium without difficulty before plunging and twisting horribly to earth, rumours about what had happened also swirled around social media – leading to Leicester police strongly denying that it had crashed into one of its drones.

In the meantime members of the air accident investigation branch in white suits and face masks began the painstaking hunt for the truth. On Monday they found the aircraft’s black box recorder but they will spend the next few days forensically examining the wreckage and crash site before reaching any conclusions.

Meanwhile those who made it through the traffic-clogged streets surrounding the King Power Stadium were greeted by a large photograph of Vichai smiling with his thumbs up in the club shop. His memory will linger forever at Leicester. But so, too, for now, does the pain.