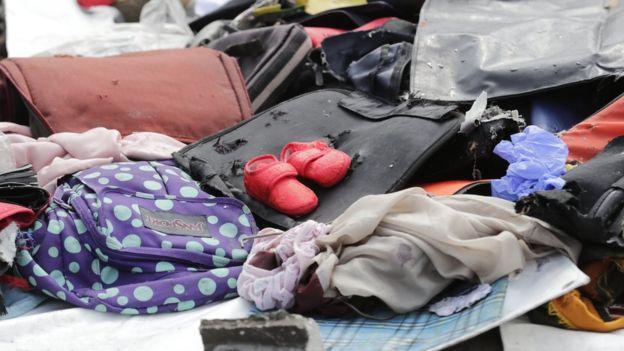 Drones and sonar technology have been deployed in Indonesia to search for a Lion Air passenger plane which crashed into the sea on Monday.

Flight JT 610 went down after taking off from Jakarta with 189 passengers and crew on board.

There has been no sign of survivors but debris and personal belongings have been collected from the water.

There is no indication yet of what caused the plane to go down 13 minutes after taking off.

Officials say the pilot of the Boeing 737 had asked to return to Soekarno-Hatta airport shortly before losing contact with air traffic control, just 13 minutes into the flight.

A technical log obtained by the BBC showed the plane had encountered technical problems while flying from Bali to Jakarta the previous day.

The log showed one instrument was “unreliable” and the pilot had to hand over to the first officer.

Lion Air’s chief executive Edward Sirait said on Tuesday that the plane had been repaired before taking off again.

Flight JT 610 was heading for the western city of Pangkal Pinang on Monday but immediately encountered difficulties.

Thirteen minutes into the flight it suddenly sped up and lost altitude, falling into the Java Sea, north-east of Jakarta.

People who were on boats in the area at the time have reported seeing it fall from the sky.

The head of Indonesia’s disaster agency, Sutopo Purwo Nugroho, said on Twitter that sonar devices were being used in the waters near Karawang – the plane’s last known point of contact.

“Hopefully this morning we can find the wreckage or fuselage,” Soerjanto Tjahjono, the head of Indonesia’s transport safety panel told news agency Reuters.

Investigators are also looking for the plane’s black box recorder, which will provide key flight data.

Search teams have been retrieving body parts from the water.

The head of the national search and rescue agency, Muhammad Syaugi, told local media 10 body bags had already been filled and would be taken to Jakarta for identification.

Fourteen bags filled with debris – including shoes, a wallet and various items of clothing – have also been collected, along with aircraft debris.

Another search official, Yusuf Latif, earlier said it would “a miracle” if survivors were found.

Mr Sutopo has also warned against hoaxes that have been spreading on social media, including pictures that users claimed were taken by passengers in their last moments before the plane went down.

In a statement, Boeing expressed sympathy for the victims and families and said it stood “ready to provide technical assistance to the accident investigation”.

Indonesia, a vast archipelago, is heavily reliant on air travel but many of its airlines have a poor safety record.

It has had issues of safety and poor management in the past and was banned from flying into European airspace until 2016.