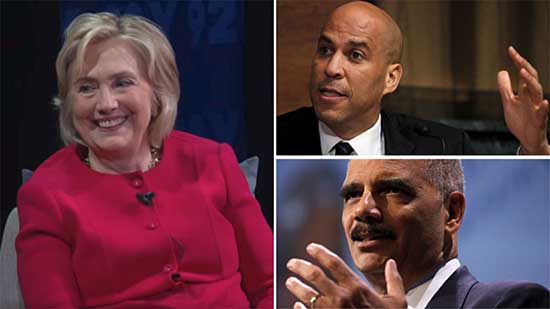 Conservative commentators are outraged that former presidential candidate Hillary Clinton made a racist joke, saying African-Americans “all look alike” while correcting her interviewer who mixed up two Democrat politicians.

Video of the exchange first began making the rounds on Monday. It shows Clinton getting interviewed on Friday on a stage in New York, by Kara Swisher of the tech news site Recode.

“What do you think of Cory Booker,” Swisher asked, “saying ‘kick them in the shins,’ essentially?”

“Well that was Eric Holder,” Clinton shot back, deadpanning a beat later,

Yeah, I know they all look alike.

Clinton would, of course, know it was Holder who said that. The former attorney general in the Obama administration argued that Democrats should “kick” Republicans who take the low moral ground mere days after Clinton herself told CNN that one “cannot be civil with a political party that wants to destroy what you stand for, what you care about.”

Moreover, Holder’s short-cropped grey hair and dark mustache set him apart from the bald-headed, clean-shaven senator from New Jersey, even though they are both African-American.

Conservative Twitterati were quick to point the accusing finger at Clinton for being racist and claim that a Republican politician would get crucified for the comment, even if they conceded the quip may have been a joke aimed at Swisher’s obvious mistake. Conservatives from President Donald Trump himself to Florida gubernatorial candidate Ron DeSantis have been accused of racismfor “dog whistles” and “code words” somehow only Democrats hear.

Clinton had just finished arguing that what some call “political correctness” was “just politeness” that Democrats valued because they were all about diversity.

“I don’t want to go around insulting people. I don’t want to paint with a broad brush every immigrant is this, every African-American is that, every, you know, other person with different religious beliefs or whatever — that’s childish,” she had just told Swisher before the Booker-Holder mix-up.

Caught by Clinton’s remark, Swisher merely responded with “Oh, well done,” as the former secretary of state smiled at her own wit. And why not – the racially loaded quip was unscripted and seemed far more genuine than Clinton’s previous attempts at humor, from reacting to the murder of Libya’s ruler with “We came, we saw, he died!” in 2011 to the cringe-worthy “How about Pokemon Go-to-the-polls?” during the 2016 campaign.