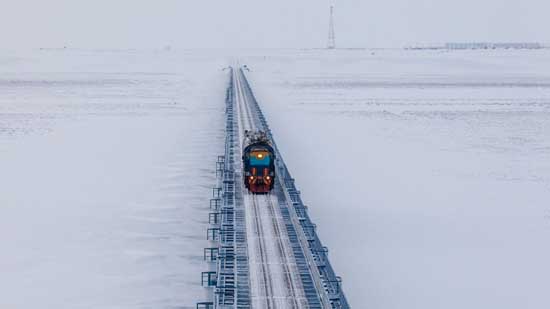 Russian energy giant Gazprom will work with Russian Railways on the construction of a railroad which will run to the new Arctic port of Sabetta, on the western shore of the Ob river estuary, on the Yamal peninsula.

The project is set to be transferred to federal ownership so that the federal budget could back the potential investors, according to an unnamed government source, as quoted by Russian business daily Vedomosti. The partners are reportedly in talks with Russia’s largest independent natural gas producer Novatek.

The new railroad is a vital transport corridor necessary for delivering cargo, transporting oil and gas, and moving freight from the Northern Latitudinal Railway to the Northern Sea Route. The new line will extend the existing 1097km-long (682 miles) railroad which connects the small northern settlements of Obskaya, Bovanenkovo and Karskaya to Sabetta.

The existing railroad is owned by Gazprom. The projected cost to build the extension will total up to 115 billion rubles ($1.7 billion), according to sources cited by the media.

The new concession agreement is going to replace the existing public-private partnership that had been clinched in 2015 between the government of Yamalo-Nenets Autonomous Okrug and VIS TransStroy, a subsidiary of VIS Construction Group. The firm was expected to finish construction by 2019, but the work hasn’t started.