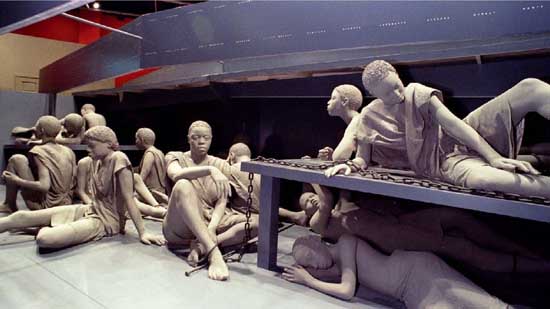 How did the US transform from an overseas colony into an economic powerhouse? A prominent think tank says “free markets” are to thank, but skeptics quickly pointed to the vast amounts of forcibly seized land and human chattel.

In a tweet promoting an article that compares gross domestic product of several US metro areas to entire countries (Los Angeles and the surrounding region have a combined GDP comparable to Mexico’s, for example), the American Enterprise Institute (AEI) praised the ingenuity of American capitalism.

“Free markets, free trade, and #capitalism propelled the US from a minor colony to a global economic superpower and the world’s largest economy, with dozens of metro areas that produce the equivalent to the GDP of some of the world’s largest countries,” AEI argued.

Many Americans were not convinced, countering that a fondness for land-grabbing under false pretenses and slavery could have had a role in US economic development as well.

“You forgot free labor, free land, and free resources. More commonly known as slavery of Africans and robbing & murdering the Indigenous people of North America. But do go on,” one unpersuaded Twitter user replied.

“No matter how much you try to pretty it up or whatever literary eloquence you apply, it was still the nightmare of slavery that made America what it is today. Don’t sit here and try to rewrite history.”

Others helpfully offered up a more concise version of AEI’s tweet:

While AEI claims that the combined GDP of the New York metro area is larger than the entire economic output of Canada, some of its other comparisons seemed a bit over-eager. Although boasting that American regions outpace “some of the world’s largest countries” in terms of GDP, AEI’s match-ups include button-sized nations like Belgium, as well as conflict-plagued Iraq – which has been repeatedly bombed and invaded by the United States over the last 25 years.