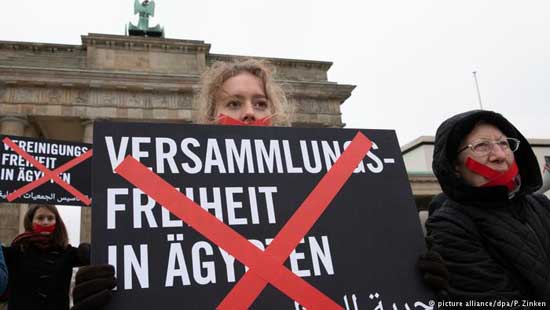 The German chancellor welcomed 11 African leaders to Berlin to introduce them to the CEOs of Germany’s biggest firms. Outside, protesters demanded Germany stop doing business with dictatorships across the continent.

“Africa is open for business.” South African President Matamela Cyril Ramaphosa couldn’t have made the basic purpose of the G20 investment summit any clearer. Ramaphosa was one of 11 African leaders in Berlin on Tuesday for what the German government said was the biggest African event the country had ever hosted.

It was also a shop window for Germany’s world-class companies to show those leaders what they could do in their countries, and what they had already done in Africa.

Throughout the early afternoon, as Angela Merkel sat in the front row alongside her African counterparts, representatives of Siemens, Allianz, Volkswagen and others took turns onstage to present power plants in Egypt and Togo, automobile factories in Tunisia and Rwanda, and decentralized solar power systems in Senegal.

The top brass were all at hand, some in military uniform, in the red-carpeted conference center squeezed between the Brandenburg Gate and the luxury Adlon hotel on Berlin’s tony Unter den Linden boulevard: Siemens CEO Joe Kaeser was there to sign a memorandum of understanding with the Egyptian business minister, beneath the gaze of the country’s president – some would say dictator – General Abdel Fattah el-Sissi.

Beforehand, Merkel used her brief keynote speech to present the government’s package of measures meant to benefit Germany’s Compact partner countries, and to lower risks for German investors. The measures included a new development investment fund for small and medium-sized companies to finance loans, new tax agreements to ensure that companies don’t have to pay taxes in both countries, as well as so-called reform partnerships – which make aid money contingent on carrying out reforms.

The chancellor’s words went down well. And local politics, too, was noted: Ghanaian President Nana Akufo-Addo took the opportunity to lament the chancellor’s “imminent departure from the political scene” and call her “one of the greatest leaders of modern times.”

“There has been a perception of risk about investing in Africa,” Guinean Investment Minister Gabriel Curtis told DW. “I think that with the announcements that the German chancellor made today, that should help encourage German companies.” He went on to praise Germany’s “Compact” initiative: “It’s highlighting the reforms we’re already making, and to ensure that we have an appropriate business climate.”

Siaka Fanny, adviser to Ivory Coast’s Finance Ministry, was equally effusive: “We need to be meeting together, so that the highest level of African countries have the opportunity to explain how good the business environment is, and how the reforms have been put in place,” he said. “This is why I think it is very good.”

But outside, while delegates tucked into a buffet lunch, protesters were unconvinced that the event would do much more than provide profits for Germany’s multinationals and political cover for certain brutal regimes.

Ari Salifou and Jean-Sylvanus Olympio of the organization Togo Debout (“Togo stands up”) were among a handful of demonstrators who expressed their fury at the authoritarian regime of Togolese President Faure Gnassingbe, who had joined the event to thank Siemens for building a gas-fired power plant in his country. Gnassingbe’s family has governed the country for more than half a century, and demonstrators are regularly killed during the protests against his plans to extend his rule by constitutional reform. Neither Merkel nor Kaeser brought this up in their speeches.

“We are here to shout that enough is enough,” said Olympio. “Fifty years of ruling Togo is not possible in the 21st century. We have to change, and Merkel’s government has to help us – Togo and other African countries need democracy.”

“Africa is rich, but the people are poor,” Olympio added, while other demonstrators showed pictures of mud-hut schools on their phones. “If you have a problem with migrants in your country, you have to know the sources of the problem.”

“They’re here to do business with Siemens and others,” added Salifou, who had traveled to Berlin from Munich. “We think that’s ridiculous, because Germany shouldn’t do business with a dictatorship. Germany is a clean country. We have democracy; we have freedom. Gnassingbe and his father have left Togo in ruins. There are no real schools, no real hospitals – when [Gnassingbe’s family] gets sick they go to France or America for treatment. This is a shame for our country.”

Other demonstrations, however, showed that alternative paths are possible in Africa. A small group of Ethiopians had also gathered to show support for their Prime Minister Abiy Ahmed, who has implemented a dramatic set of reforms in his country since taking office in April, beginning by lifting a state of emergency, releasing political prisoners, and sacking corrupt ministers and generals.

Haile Mengesha, of the Berlin-based Ethiopian diaspora organization Ethio Berlin Verein, said he liked the Compact partnerships that Germany had initiated, as they encouraged the reform of judiciaries and electoral commissions.