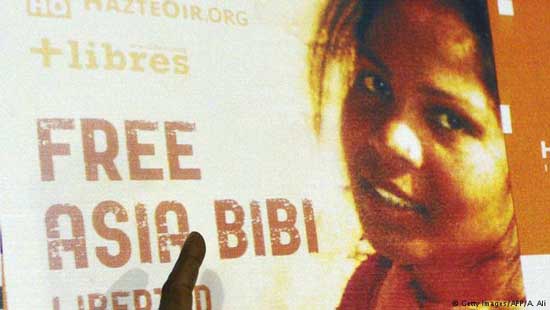 In a landmark verdict, Pakistan’s Supreme Court has acquitted Asia Bibi, a Christian woman who had been sentenced to death on blasphemy charges. The country’s Islamists have vowed to protest against the ruling.

In the Wednesday ruling, Supreme Court’s Chief Justice Saqib Nisar said Asia Bibi would be set free if she is not wanted in relation to any other case.

“Her conviction is set aside and she is to be relieved forthwith if not required in other charges,” the judgment read.

“The expression ‘proof beyond reasonable doubt’ is of fundamental importance to the criminal justice: it is one of the principles which seeks to ensure that no innocent person is convicted,” Nisar said.

“Keeping in mind the evidence produced by the prosecution against the alleged blasphemy committed by the appellant, the prosecution has categorically failed to prove its case beyond reasonable doubt,” concluded the chief justice.

Bibi was arrested in June 2009, after her neighbors complained that she had made derogatory remarks about Islam’s prophet, Muhammad. A year later, Bibi was sentenced to death under the blasphemy laws despite strong opposition from national and international human rights groups.

Pakistan’s Supreme Court had reversed two lower court verdicts against Bibi in what was her final appeal against a 2010 death penalty after a hearing on October 8 of this year.

In 2014, her death sentence was upheld by the Lahore High Court. Rights group Amnesty International dubbed the verdict a “grave injustice.”

In 2015, Bibi’s lawyers filed an appeal in the Supreme Court against the death penalty.

“The verdict has shown that the poor, the minorities and the lowest segments of society can get justice in this country despite its shortcomings. This is the biggest and happiest day of my life,” Saiful Mulook, Bibi’s lawyer, told AFP news agency.

After the October 8 hearing, Mulook told DW he believed if the appeal was heard on merit, Bibi would be released.

“The incident happened on June 14, 2009, but the case was registered on June 19, 2009. The accused did not get the benefit of doubt. Legally, it is a weak case,” Malook said, adding that witness statements were contradictory.

“It is a historic ruling and will be helpful in promoting religious harmony,” Ayub Malik, an Islamabad-based political analyst, told DW. “Bibi’s acquittal proves that most blasphemy cases in Pakistan are fabricated.”

“This is a landmark verdict. The judges and lawyers have demonstrated great courage,” Farzana Bari, an Islamabad-based rights activist, told DW.

“But the government’s real test starts now, as it faces a backlash from extremists. The authorities must protect Christians’ lives and properties,” Bari added.

“Bibi’s family is very excited but at the same time worried. They are still in hiding as severe threats have been made against them. We hope the government will ensure their security,” Joseph told DW.

“We will embrace death but will not compromise on our stance [against Bibi],” Pir Ejaz Shah, a spokesman for the Tehreek-e-Labaik Pakistan (TLP) Islamist group, told DW after the Wednesday ruling.

Mubashar Zaidi, a Karachi-based journalist, wrote on Twitter that Bibi could be flow out of the country anytime soon.

Earlier this month, the TLP said in a statement that “any attempt to hand her [Bibi] over to a foreign country” will have “terrible consequences.”

Local media said Islamist activists were gathering in Islamabad and other major cities to protest against the ruling.

Blasphemy laws in Pakistan, where 97 percent of the population is Muslim, were introduced by the military dictator General Zia-ul-Haq in the 1980s. But activists say they are often implemented in cases that have little to do with blasphemy and are used to settle petty disputes and personal vendettas. Christians, Hindus and Ahmadis — a minority Islamic sect — are often victimized as a result.

Experts have said that Bibi’s case is no longer only religious; it has become a politically charged issue in the past few years.

A few months after Bibi’s conviction, Salman Taseer, a former governor of the central Punjab province, was murdered by his bodyguard, Mumtaz Qadri. Qadri shot Taseer 28 times in broad daylight in Islamabad on January 4, 2011, and was sentenced to death in October the same year.

Qadri showed no remorse over the killing. He said he had murdered the former governor for his efforts to amend the country’s blasphemy laws and his support for Bibi. Qadri was showered with rose petals by right-wing groups as he was taken to jail by the authorities. Subsequently, some mosques were named after him, and huge portraits of him were erected across the country.

The South Asian country’s Islamic groups fear that any concession to Bibi, or any other blasphemy victim, might lead to amendments in the Islamic laws and open a door to the secularization of Pakistan.

Bibi’s family has been living under constant fear since 2010. The Christian woman’s husband, Ashiq Masih, has been fighting a desperate battle for the life and freedom of his wife ever since.

“We are living a life on the run,” Masih told DW. “Our lives are being threatened. We receive death threats constantly and are moving from one place to another – and we try to support each other.”

“I spent almost 45 years of my life in my native village. I had many friends there. But now I do not want to go back,” he said, adding that his family’s life has been destroyed.

Masih is also scared. He is afraid of being recognized as Asia Bibi’s husband in public: “This is why I almost never speak with Muslims. I am frightened that they know who I am.”

Pakistan’s Christians and other religious minorities complain of legal and social discrimination in their country. In the past few years, many Christians and Hindus have been brutally murdered over unproven blasphemy allegations.

In one case, a young Christian girl with Down syndrome was accused in August 2012 of burning pages upon which verses of the Koran were inscribed. Rimsha Masih was taken into police custody and only released months later, when charges were dropped. The case caused an uproar in her hometown and beyond and sparked riots and violence against Christians in the region. In 2013, she and her family relocated to Canada.

In 2014, a Christian couple was beaten to death for allegedly desecrating a copy of the Koran. Their bodies were subsequently burned in a brick kiln.

In September last year, a Christian man in Pakistan was sentenced to death for sharing “blasphemous” material on WhatsApp.

The Human Right Commission of Pakistan (HRCP), an independent rights group, lashed out at the government for not acting against Islamists that have unleashed a hate campaign against Christians.

“It is unfortunate that the government has not taken any action against the extremist groups that are active on social media. The government’s inaction has actually emboldened them. The incumbent government is doing what the past governments did – appeasing the right-wing groups,” Mehdi Hassan, the HRCP chairman, told DW.

International rights groups and Western governments demanded a fair trial in Bibi’s case. In 2015, Bibi’s daughter met with Pope Francis, who offered prayers for her mother at the Vatican.

In a 2014 interview with DW, Dr. Clare Amos, a coordinator for the Geneva-based World Council of Churches’ inter-religious dialogue and cooperation program, said that Bibi’s plight should not be ignored and that Pakistan’s blasphemy laws should be amended to make sure that they are not applied in cases of personal disputes.