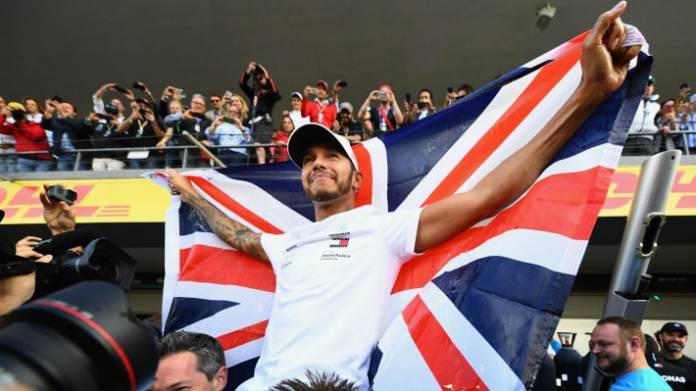 The debate over who is Formula 1’s best ever driver is revving up following Lewis Hamilton’s latest championship victory.

Mercedes star Hamilton wrapped up the 2018 title on Sunday with a fourth-placed finish in Mexico, which puts him on five career championships. Aged 33, the British driver is now within two wins of Michael Schumacher’s all-time record of seven titles and many pundits are predicting he could overtake the German.

Despite winning another championship, Hamilton said that he regards Schumacher as F1’s greatest of all time (GOAT).

“Firstly I could never ever personally classify myself as the best,” he said. “Obviously, within myself, I know my abilities and where I stand. But ultimately, my dad always told me, since I was eight years old, he said ‘do your talking on the track’.

“So I just try to let my results and the results from the things that I do outside of my sport, hopefully, also contribute to that, so people can hopefully create a decent opinion. But Michael’s still quite far ahead in race wins so you have to say he is still the GOAT.”

However, with five title wins now secured Hamilton does hope to get close to Schumacher’s seven. “I’ve not really put any thought towards getting to that number – just because I’ve been trying to focus on getting this one,” he added.

“Whether or not I’m going to have the chance to win more, who knows – but I’m going to give it everything to do so. There’s still a long way to go but I’m here for a few more years, so I’m hoping that I can at least get close.”

Record is within reach

Benson said: “The 33-year-old is the equal second most successful driver in history, in terms of titles, drawing level with the great Argentine Juan Manuel Fangio. Suddenly, Michael Schumacher’s all-time record of seven, which for a while looked impregnable, is within reach.”

A poll currently running on the BBC Sport website asks the question: who is the greatest F1 driver ever? Schumacher leads with 29% of the vote while Hamilton is close behind on 28%. Ayrton Senna is third on 26%.

Looking at the data behind Hamilton and Schumacher’s F1 careers, The Daily Telegraph says that the Mercedes star “must now enter the conversation to be the greatest F1 driver of all time”.

While Schumacher has 91 grand prix victories compared to Hamilton’s 71, the Briton did win his fifth title at the same age as the F1 icon.

Hamilton has a contract until 2020 with Mercedes so it would “almost be a surprise if he didn’t go on to scoop more titles”, says the Telegraph’s senior data journalist Patrick Scott.

“Even if Hamilton had chosen not to continue his career after this season, his statistics are such that he already has a claim on some metrics to being the best F1 has seen,” says Scott.

“Hamilton’s claim to be the best F1 driver ever is still by no means bulletproof, but his recent record certainly puts him in the frame.

“If his hot streak continues for another couple of years as his age dictates it could – Schumacher’s stopped after five years – then Hamilton’s claim to being the greatest ever could become impossible to deny.”

Speaking on his YouTube channel, 2016 champion Rosberg said: “For Lewis now it’s five titles, it’s unbelievable and it’s crazy to think. He can seriously go for Schumacher’s records now. He’s got two more years on the contract and Schumi is only two titles away and 20 race wins away – even that’s possible in two years.”