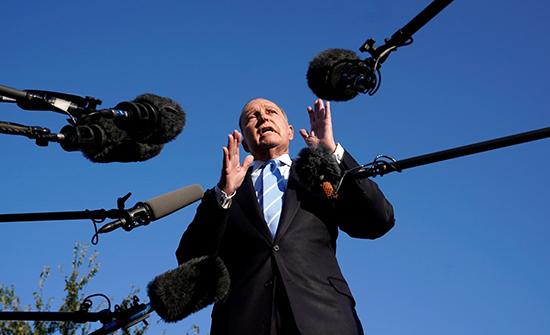 WASHINGTON (Reuters) – U.S. President Donald Trump has not “set in stone” any decisions on escalating tariffs on Chinese goods and may withdraw some duties if there are promising policy discussions with China, White House economic adviser Larry Kudlow said on Wednesday.

Kudlow said on CNBC that the meeting agenda between Trump and Chinese President Xi Jinping at the end of November in Buenos Aires has not yet been worked out, but “we may have a very good meeting in Argentina with President Xi.”

Asked about whether Trump would proceed with tariffs if the meeting fails to ease trade tensions, Kudlow said: “I would say nothing is set in stone right now. By the way, the president on one of the cable shows, did say – it didn’t get picked up – that if some kind of amicable deal with China were to happen, then a lot of tariffs might be pulled back.”

Bloomberg reported on Monday that the Trump administration was preparing to announce tariffs on the remaining Chinese imports, about $257 billion worth, if the meeting fails to ease the U.S.-China trade war, citing unnamed sources.

Trump has long threatened to impose tariffs on all $500 billion-plus goods imports from China if Beijing fails to meet his demands for sweeping changes to its policies on intellectual property, technology transfers, industrial subsidies and local market access.

Kudlow said there was no specific trigger point for a decision to impose more tariffs on Chinese goods.

He said Trump said in a recent interview that if there are “promising policy discussions, I don’t know about a full fledged deal, but if things go well, maybe some tariffs get withdrawn and maybe not.”

Kudlow did not specify the interview to which he was referring.

In an interview on Fox News Channel’s “The Ingraham Angle” show on Monday, Trump did not specifically mention the potential withdrawal of tariffs, but said he expects “a great deal” with China.