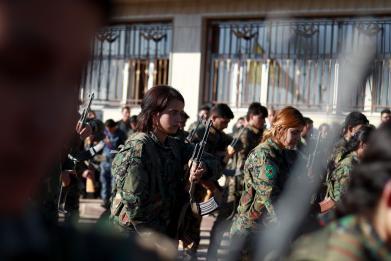 Iran-backed militias in Iraq have launched attacks on the Islamic State militant group (ISIS) in Syria, assisting the U.S.’s main allies there as they come under attack from Turkey.

The Popular Mobilization Forces, a group of mostly Shiite Muslim Iraqi paramilitary forces supported by Iran, launched a cross-border attack Wednesday against ISIS after the jihadi organization killed members of the Syrian Democratic Forces (SDF), a mostly Kurdish force trained by the Pentagon. Despite tensions between their foreign backers, Iraqi Western Anbar Axis commander Ahmed Nasrallah said that the operation came in response to the deaths of the Syrian Democratic Forces members.

“The commanders were driving ISIS attacks against the SDF forces that withdrew from the border,” he added.Syrian Democratic Forces (SDF) attend the funeral of one of their commanders, killed a day earlier in the town of Hajin during battles against ISIS, in the Kurdish-controlled city of Al-Qamishli, in northeastern Syria, on October 29. A commander of the Iran-backed, mostly Shiite Muslim Iraqi Popular Mobilization Forces claimed to have killed two ISIS leaders responsible for the attack on SDF.

ISIS emerged in 2013 out of a violent Sunni Muslim insurgency that has plagued post-U.S. invasion Iraq, and it soon spread across the border, taking advantage of the unrest spurred by a 2011 uprising against the Syrian government by rebels and jihadis sponsored by Washington and its Middle East allies. Iran mobilized regional Shiite Muslim militias in both countries to support government troops beat back ISIS. Meanwhile, the U.S. formed a coalition in 2014 to bomb the militants, siding with the government of Iraq, but not of Syria.

In Iraq, the U.S.-led coalition assisted the country’s armed forces and Kurdish fighters battling alongside the Popular Mobilization Forces, but the Pentagon sided with the Syrian Democratic Forces in Syria, operating outside of Damascus and Tehran’s control. In recent years, ISIS has been reduced to pockets of influence in both countries; however, Syria remains divided as the U.S.-backed Syrian Democratic Forces and the Tehran and Moscow-supported Syrian military maintain lines of control on opposite banks of the Euphrates River in eastern Syria.

On both sides of the river, the rival offensives face stubborn holdouts of jihadi power, and the Syrian Democratic Forces were recently forced to withdraw from a position they previously secured near the town of Hajin. As this battle raged on earlier this month, Iran’s Revolutionary Guards fired ballistic missiles against ISIS positions just three miles from U.S. troops in this area as tensions played out between Washington and Tehran.

While the Pentagon has focused on wiping out ISIS presence, Washington has confirmed that it seeks at least one more additional goal in Syria—expelling Iran and its local partners. President Donald Trump’s administration has accused Iran of sponsoring designated terrorist organizations and developing ballistic missile technology. The U.S. officially withdrew from a 2015 nuclear deal in May, despite pleas from allies—as well as China and Russia—to stay.

Still, confrontations between the U.S. and Iran’s partners in Syria have remained limited and the Syrian Democratic Forces have since come under renewed attack from one of Washington’s allies. Fellow Western military alliance member Turkey has begun shelling Kurdish positions in northern Syria, targeting the People’s Protection Units (YPG), a Kurdish militia central to the Syrian Democratic Forces but considered a terrorist organization by Turkey.

Though the U.S. has often touted Turkey’s role in the war against ISIS, the Syrian Democratic Forces said in a statement Wednesday that they consider ongoing Turkish strikes against Kurdish positions near the border to be “direct support provided by the Turkish state to the ISIS terrorist organization,” claiming Ankara actually coordinated with the jihadis. The previous day, the Syrian Democratic Forces’ political wing called on both the U.S.-led coalition and the Syrian government to take action against the incursion.

At the same time, the U.S.-led coalition has been criticized for failing to rebuild and rehabilitate areas it bombed during last year’s intense campaign to oust ISIS from its de facto capital of Raqqa. International human rights groups and monitors have claimed that the U.S.-led coalition has severely underestimated the civilian death toll inflicted by this offensive. This has been a major talking point for Russia, which also stands accused of killing scores of civilians as it helped the Syrian military and allies retake most of the country.

With much of the country under government control, Moscow has appealed to the international community for assistance in resettling Syrian refugees who have fled within and outside the country. During a Russian Ministry of Defense briefing Wednesday, spokesperson Major General Igor Konashenkov touted the stability returning to places under government control, but said that “the situation is quite different in the territories controlled by the coalition and, in particular, where the U.S. armed forces operate.”

“The tragedy of the Syrian city of Raqqa is known throughout the world. It has been a year since, as a result of coalition bombings, this city was virtually wiped off the face of the Earth,” Konashenkov said.

“Thousands of bodies of dead citizens remain today under the ruins of buildings, which decompose and poison the aquifers. There is no running water in the city, no electricity, no demining, no shops, nor hospitals and pharmacies working,” he added noting that the situation off the eastern Euphrates bank was also “rapidly deteriorating” after a spate of alleged ISIS kidnappings and Kurdish casualties.

That same day, Raqqa Doctors’ Union head Jamal al-Issa told Syrian pro-government newspaper Watan that a mass grave of 1,500 bodies was found, adding to the thousands of other corpses that have been discovered at such sites.