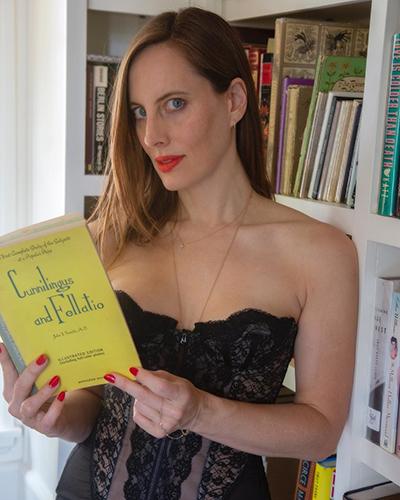 “A revolution is underway—but it’s education that’s going to shift the paradigm,” urges Liz Goldwyn. “We need to provide support and information by creating a space where people can process what’s going on today, form their own opinions, and discuss them freely.” This is the key principle on which The Sex Ed, Goldwyn’s new platform exploring sex, health, and consciousness in the digital age, was founded. And as if there was any doubt, the Los Angeles–based artist, filmmaker, and author is unquestionably the woman for the job.

“I don’t remember a time when I wasn’t aware of the long, complicated history of reproductive rights,” explains 41-year-old Goldwyn, the daughter of feminist screenwriter and novelist Peggy Elliott. Her memory loss is justified, given Goldwyn attended her first pro-choice rally at age 9 and began interning at Planned Parenthood at 13, answering phones in the office at the Santa Monica clinic where STD testing was, at long last, becoming a priority, and antiabortionists were regularly picketing outside with disturbing scare tactics. Strong-willed and undeterred, at 17 she moved to New York City to study at the School of Visual Arts, where she delved deeper into sex-positive feminism with her art. She would eventually go on to write and direct HBO’s 2005 documentary film Pretty Things, which explored the lost art of burlesque dance, and pen Sporting Guide: Los Angeles, 1897, a collection of fictional stories based on real-life news articles about the madams of brothels in 19th-century L.A. But while her expansive body of multimedia work speaks for itself, The Sex Ed is shaping up to be her magnum opus.

“I knew at an early age I’d eventually want to leave behind some sort of comprehensive sex education database,” explains Goldwyn. “I thought it would be later in my life, perhaps in my 60s or once I officially got a PhD. But the past couple of years, and the current administration, pushed me to look at my life and decide if I’m really living my truth and fulfilling what my mission is. What is success to me? When I answered that question it was having a [significant] impact on furthering the discussion around sex and sexuality.”

And while, for Goldwyn, President Trump’s administration has served as an acute catalyst in getting The Sex Ed off the ground, the project has actually been a decade in the making. “I bought the domain name for the site in 2008, but it’s been an uphill battle my entire career, with people saying, ‘Why do you care?’ Women have been sidelined throughout history—and whenever sex is added to the mix, people become even more culturally uncomfortable with it.” That said, while archaic social constructs are still an obstacle in terms of female sexual liberation, Goldwyn believes that the tides are, in fact, turning. “This administration taking power, coupled with the shakedown in Hollywood with Harvey Weinstein, [has marked a] tipping point with the powers that be—the patriarchy. Coming from the perspective of someone who has been in the field as long as I have, over the past two years there’s been a sea change in terms of people opening up about sexual wellness. Suddenly the mainstream is a lot more receptive to this idea.”

Answering the call for an inclusive, cross-cultural dialogue, The Sex Ed is taking on taboo subjects, such as period sex and the fickle relationship between stress and sex, both academically with essays written by experts such as doulas, sex therapists, and sex workers, as well as Op-Ed-style pieces with a #FirstPerson series that highlights a range of individuals sharing their firsthand experiences with sexuality. “We are all walking around feeling like we have a million different questions and neuroses about sex, but by hearing each other’s voices, we all start to realize no one person has it more figured out than the next,” explains Goldwyn. “We’re all evolving and on a learning curve when it comes to sexual education. The more we share our sexual experiences, the more we can feel less alone.” Equally important to Goldwyn is representing, as well as honing in on, the safer practices of marginalized groups within the realm of sexuality. “Society has lot to learn about consent, and boundaries are so clearly negotiated in the fetish and kink community,” she explains. “On top of that, [STD] testing between partners is a lot more common in the gay community. These are things that need to be further introduced to the heteronormative mainstream.”

And taking her mission to a new medium in the spirit of truly uncensored self expression, today Goldwyn launches The Sex Ed’s new podcast, which will feature candid conversations with a variety of personalities and specialists, from burlesque star and close confidante Dita Von Teese to Joshua Gonzalez, M.D., who has devoted his career to treating sexual dysfunction with a special concentration on LGBTQ issues. “As digital platforms have made the nature of sex more transactional, it hasn’t done anything to foster intimacy and communication between partners,” says Goldwyn. “To have really great sexual experiences, you have to feel liberated. The more you discuss these things, the freer you can be in the moment.”