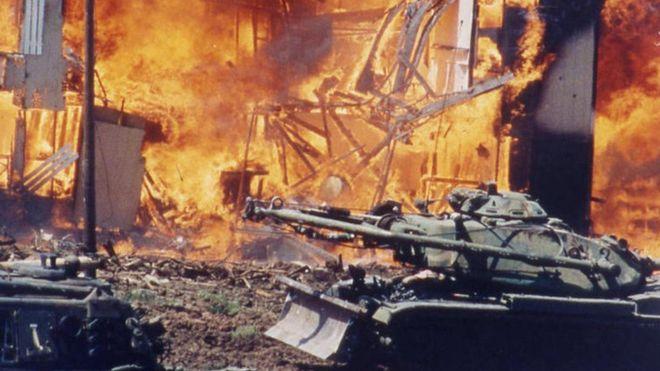 The world watched as a compound in Waco, Texas, became a horrific fireball. Inside the burning building were cult leader David Koresh and scores of his followers. Twenty-five years on, relatives of the British victims reflect on what happened.

Koresh became infamous as the self-styled prophet who thought he was the new Christ.

His followers were in thrall to him, and remarkably, 30 of them were British. Only six of them survived.

They came from the streets of Manchester, London and Nottingham – outwardly ordinary young people in their 20s and 30s.

History has largely forgotten them. These are their stories.

Her sister Gail cherishes memories of a lively girl about town: “I used to call her ‘rent-a-crowd’, because she always had a gang of girls around her. She loved Van Halen, and she loved soul music – she and her friends would go to gigs all round the country.”

Bernadette Monbelly was well liked at work, as a training supervisor in a bank. A vibrant young woman enjoying the social life and clubs of 1980s London.

One day a leaflet came through the sisters’ door – it was an invitation to the local Seventh Day Adventist Church, where many of the congregation, like Gail and Bernadette, were either first or second Windrush generation. Gail and Bernadette both took up the offer.

Bernadette fell in with a group preaching radical Christian theology in their own small circle, away from the main church services – and there was talk of a man in Texas who knew the secrets of the final judgement day.

Bernadette hadn’t been feeling right – her health had taken a downward turn, and as her sister remembers, it lowered her guard enough for their influence to overtake her.

“These people started enveloping her. They were always at her place, day and night. And I told her, ‘Bernadette who are these people?’ And she said ‘They’re helping me’. And that was when the paths started to separate.”

The man in Texas they were referring to was David Koresh. The reason they were talking about him was that he had actually visited England with his right-hand man – scouting for members who would join his budding sect.

A prophet on campus

It’s understood that David Koresh came to England around 1988 along with his trusted lieutenant – a man called Steve Schneider.

They sought a fertile recruiting ground for their message of the imminent coming of the apocalypse, or “Revelation” as it is depicted in the Bible.

Koresh himself had been rejected from the Seventh Day Adventist Church in Texas. So he knew that his starting point in England would be there.

He gave talks at a Seventh Day Adventist college in Berkshire called Newbold, without permission, and kept his identity a secret from its staff.

It was there that three students had their lives changed forever.

From there, the power of Koresh’s message on their minds would ripple out to families across England.

At the time, one of these students was dating a Manchester girl called Diana Henry.

She was from a large family of five brothers and sisters; her father was a bricklayer in Old Trafford.

Diana had just finished her degree in psychology when her boyfriend sold her Koresh’s message of a utopian life at his Texas commune.

As her father Sam remembers: “Her boyfriend wasn’t a flippant lad, he was a serious lad. And so she thought well, if that’s what he says, it’s got to be right. She was hooked. She dropped her studies and would have followed this man anywhere.”

Diana would make several visits to Waco, slipping away during term time to meet David Koresh without her father’s knowledge, before coming back to Manchester one last time.

Sam remembers how on that occasion she became instrumental in spreading Koresh’s message herself.

She organised meetings in a semi-detached house in a Manchester suburb called Cheetham Hill at which dozens of young people attended.

Koresh’s lieutenant was there, giving a charismatic talk, and saying “he needed to take his instructions from God”.

He was talking, of course, about Koresh.

“I remember turning to my wife and saying: ‘This is strange. This is not right.'”

“There were people standing, sitting on window ledges, in corners, and they were about an urgent business. And when I tried to interrupt the speaker to ask questions, they were like ‘Woooah! Why are you challenging this man?'”

George Taylor saw what was happening to Sam’s daughter Diana. He tried to change her mind – to stop her from being seduced into the would-be prophet’s message.

His pleas fell on deaf ears.

In time, Sam Henry would make a frantic journey to Waco to try and convince her to return. There he confronted David Koresh himself: “He tried to convince ME to stay there as well. He said come here – the authorities will never find you. He tried everything.

“I said we must leave, you must leave this place! But she didn’t listen. None of them listened.”

Sam had to return to Britain without his daughter.

But worse was to come. Diana had in fact convinced her mother and four siblings to also leave their father and journey to join her at the commune in Waco, not long after.

None of his family would return alive.

The cult spreads in Britain

Back in Britain – in Nottingham – Devon Elliott was trying to talk his sister out of going over to Waco.

A cheerful, gentle man in his mid-50s, one would never assume that he more than many others suffered the most terrible pain of Waco.

“I lost my sister, her fiance, my auntie, my cousin-in-law, and a very close friend.”

They had each been entranced by Koresh’s message at Newbold College.

Devon remembers his sister Beverly’s wonderful singing voice and sense of fun. ‘”I wish I had recorded her singing years ago,” he says.

“Some people from London had come up to Nottingham, trying to have meetings, chats. Obviously they’d got wind of some theology which wasn’t really sound. But it was just like me going to my mates to watch the football – nobody really looked into it any.

“In hindsight, if I knew she was going to go, I would have cut her passport up. I would have,” he remembers. He didn’t know that she really meant to carry out her plan.

Instead, he had to watch on helplessly as communication with the cult commune was lost; how the FBI eventually surrounded the building, fearful of Koresh’s stockpile of weapons; and how a growing sense of unease would become a national – and international – tragedy.

“To me this was like being in a film. My life became all about just watching this white building. And at one moment you just see it all crash. And I’m thinking… my sister’s in there. My aunty is in there. People that I love dearly are in there,” Devon says.

Koresh’s offer to the Britons was a seductive one.

They’d mainly come from traditions well versed in the Bible. So he was pushing at an open door.

The Revelation, or the Biblical description of the apocalypse, was at hand, he said.

He’d convinced them that he was the next messiah – one sent by God to lead those righteous souls that would be saved, and that would taste eternal life.

He told the Britons that they would be among them. That they should go to lead a frugal life of prayer at his Texas ranch, preparing for the imminent end of days.

What he didn’t tell them is that his version of the apocalypse would be armed with a massive stockpile of guns and ammunition – and that he was a serial sexual predator.

Their ‘End Of Days’

The FBI’s attempt to release the cult members ended in a horrific fireball.

In a matter of minutes, 72 people died. Twenty-four were British. They had left cities and towns seeking a simple life, fulfilling Biblical prophecy.

“The ‘wackos of Waco’ were like you and me” says Gail Monbelly as she remembers her sister Bernadette. She wants people to reconsider the memory of the 30 Britons who went there.

As a senior British detective who investigated Waco also remembers, “the problem is that they were all tarred with the same brush. And that was quite wrong. Responsibility for what happened at Waco lies with one man only. And that is David Koresh.”

The stories of the Britons of Waco and their entrapment by Koresh is told in a new BBC Radio 5 Live Podcast, ‘End Of Days’ – available now on BBC Sounds.