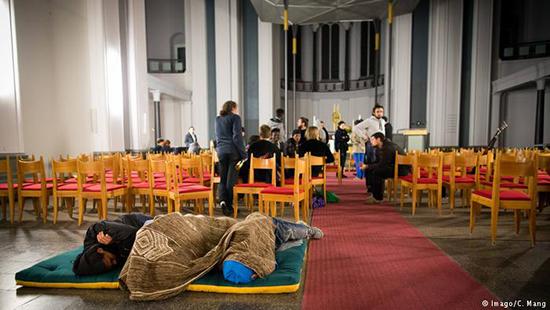 Punitive social handouts to dissuade “Dublin” asylum-seekers are wanted by interior ministers of the 16 regional states, a report says. One in three applicants arriving in Germany via other EU nations could be affected.

The newspaper Welt am Sonntag disclosed Sunday that ministers decided at their most recent twice-yearly conference in the eastern city of Magdeburg to press Germany’s federal government to trim handouts via legislative amendment.

The EU’s “Dublin” policy — now in its third version since a 2003 bid to create common standards within Europe’s internal open borders — requires the country where a seeker first enters Europe to process his or her application for shelter.

“The first member state in which the application for international protection was lodged shall be responsible for examining it,” states Article 2 of the EU’s regulation amended in 2013.

If this does not eventuate within six months, responsibility shifts typically to the nation in which the applicant has ended up.

Among 77,000 applicants registered in Germany in the first half of 2018, 30,000 were designated as returnable “Dublin” cases by the Federal Office for Migration and Refugees (BAMF) based in Nuremberg.

Of these, 21,000 cases were recognized by first-entry nations, but only 4,922 “Dublin” applicants were actually sent back, according to the federal government in a reply to an opposition Left party parliamentary question.

To discourage such arrivals, Welt am Sonntag said ministers wanted penalties built into Germany’s social welfare handouts [cash and materials] provided otherwise to asylum-seekers; for example, €416 ($470) monthly for an applicant who is single.

The intended disincentive comes on top of persistent disputes with officialdom over “church asylum” offered variously by congregations and monastic orders.

Last August, the ministers, including German Interior Minister Horst Seehofer, issued a decree, extending the normal six-month period up to 18 months on exceptions, for example, if an applicant is in custody or cannot be located.

Parishes and monastic orders risk extensions if they fail within four weeks to present “hard-case” documentation for those rejected but still seeking asylum on appeal while living in their care.

Marx, however, also urged communities to act wisely with “the tradition of church asylum.”

In November, the Protestant EKD synod meeting in the southern city of Würzburg protested the extension to 18 months, demanding that the federal BAMF accept “reasonable” deadlines and reach out to church contact persons in cases of “special humanitarian hardship.”