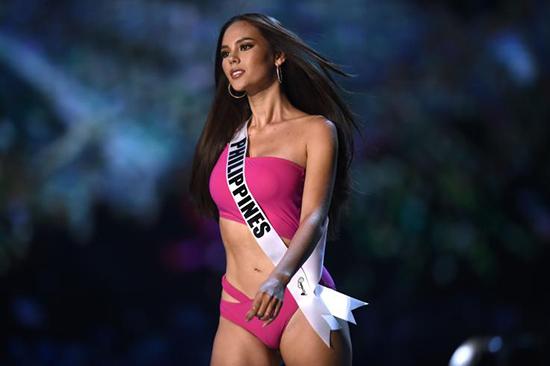 The dress was pictured alongside images of the erupting Volcano in a set of images shared by Twitter user @Kylabiancss Sunday evening. The photos show extreme details on the dress not easily seen by television viewers. In the dress, bold red tones swirl with orange spots, mimicking the beauty of fire. Gray’s dress was the only vibrant color in her final 10 group, let alone the final five and three she joined, which were made up of women in silver dresses.

Her evening look was designed by Mak Tumang, who also designed Gray’s stunning preliminary competition dress, which was a burnt orange color inspired by a mythological theme, according to ABS-CBN.

The Mayon Volcano is a Stratovolcano which lies in the Albay province.

Gray was favored to win by Social Media users. She’s known for a slo-mo twirl on the runway, which she performed during the swimwear portion of the global competition Sunday night. Throughout the evening, she received boisterous cheers, second only to Miss Thailand, who was competing at the live competition hosted in her home country.

The 24-year-old pageant powerhouse was born in Australia and spent her college years in Boston, Massachusetts. She attended Berklee School of Music according to the Manila Standard. Gray was a jazz singer in her school years. Now, Gray is a television host and model.

During the Sunday show, Gray was asked what her biggest life lesson was, and how it relates to her possible future as Miss Universe. She answered with a note on the children she’s met. “I’ve always taught myself to look at the beauty of the faces in the children & to be grateful,” she said of her time volunteering in the ‘slums.’ “If I could teach people to be grateful, we could have an amazing world where negativity would not grow & foster & children would have a smile on their face.”

Twitter users celebrated Gray’s possible victory before she was even added to the semi-finals. By searching the term “Miss Universe,” most search results boast love and confidence in Gray’s future. “Catriona is just simply amazing. HANDS OWN TO OUR NEW (OH YES I AM CLAIMING IT) #MissUniverse,” tweeted on user, @peysquareeeed.