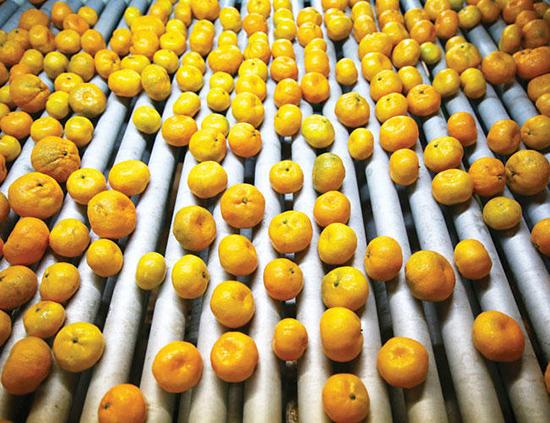 Turkey has increased its citrus exports to the European countries by increasing the quality of the products.

The top market for Turkey citrus exports in November, which make up a major portion of the country’s fresh fruit and vegetable sales, was Russia: A total of 165,000 tons of products worth $77.3 million were sold to Russia.

The increase in quality has also brought increase in exports to the European Unionmembers.

The total citrus exports to the United Kingdom, Italy, Germany, the Netherlands, Bulgaria, Poland, Romania and the Czech Republic in November was 43.747 tons for $22.7 million.

The highest increase among EU markets was seen in exports to Italy, which was 815 tons in November of last year. Italy paid $787,413 last month to buy 13417 tons of products, marking an increase of 74 percent.

Exports to Bulgaria increased by 63 percent compared to the same month of last year, followed by the Netherlands by an increase of 50 percent, Poland by 49 percent, Romania by 37 percent, Germany by 26 percent, the Czech Republic by 17 percent and the U.K. by 6 percent.

As of the end of November, the biggest increase in the sub-groups of Turkey’s fresh fruit and vegetable exports was in citrus sales with 34 percent, he added.

“Based on the amount, the most popular type of citrus in exports markets as of the end of November was tangerine, with 369,000 tons,” Kaçmaz said.

“This is happy new for the sector as we expected in an increase in lemon harvest,” he said. “We compensated this increase by boosting our exports markets, and we are especially happy with increasing our sales to the European states, particularly to Italy and the Netherlands.”

The overall lemon consumption around the world in on the rise, Kaçmaz noted, adding that Turkish citrus growers want to increase both production and exports.

“We aim to increase our exports especially to the Eastern Asian markets in the coming yars,” Kaçmaz said.

“When we open the doors to the far markets, Turkish citrus will be much better known and sold all across the world,” he added, noting that the 14th World Citrus Congress will be held in the southern Turkish province of Mersin in 2020.