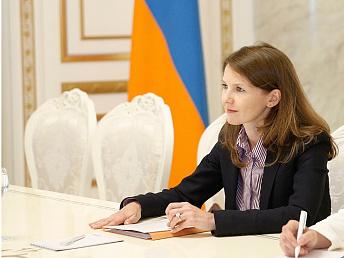 YEREVAN, /ARKA/. Armenia’s macroeconomic indicators show today a steady pace of development. GDP growth, inflation rate and debt burden are within reasonable bounds. How can global economy processes impact Armenia, what risks can threaten the country’s financial sector and what compensatory measures of the tax policy are needed to protect fiscal space?
Yulia Ustyugova, IMF Resident Representative in Armenia, answered these and other questions in an interview with ARKA News Agency.

Ustyugova: The growth projections for 2018, that we published a few months ago, were underpinned by the solid global economic growth and strong economic activity in Armenia in the first half of the year. However, some downside risks have materialized, and the economic activity has been moderating recently more than expected. This prompted the recent downward revisions to growth, including by the CBA. Our growth projection today would fall below 6 percent as well. As for 2019 and the medium term, we expect growth to decline to more sustainable levels. Those levels were revised up compared with earlier projections, considering Armenia’s solid economic performance in 2017-18, the new government’s strong reform plans and still favorable external environment.

ARKA: According to IMF experts, Armenia, as a country with an open small economy, should focus on export-oriented sectors. How would you comment on the situation with the balance of payments in the context of the economies of the partner countries?

Ustryugova: Rebalancing growth towards exports and seizing new export opportunities are among the priorities for a small open economy of Armenia. Armenia’s exports as a share of GDP is lower than its peers and developing export potential could provide a sustainable source of long-term growth. After strong performance in 2017, exports growth in 2018 has been decelerating. In fact, export, imports and remittances have all been decelerating. The export growth has slowed due to the mining sector issues. The real exchange rate of dram has been strengthening due the depreciation in neighboring countries, adding to competitiveness pressures. The trade balance weakened as imports growth still exceeded that of exports. Remittances have also been moderating as ruble depreciated. As a result, Armenia’s current account deficit has been widening in 2018 despite solid economic growth globally. And while some factors weighing on trade are temporary, improving the performance of the external sector will remain an important policy challenge.

ARKA: A number of experts believe that the macroeconomic indicators of Armenia are within the normal range, the state debt is managed and serviced, inflation is within the planned boundaries, the rate is stable, and the budget is balanced. The picture is quite favorable. Or is it not so and why?

Ustyugova: In our view, Armenia’s macroeconomic performance has been solid. The economy continues growing, albeit at a slower pace than in 2017. The CPI inflation broadly remains within the CBA tolerance range, monetary and financial conditions are generally stable, and the projected fiscal deficit for 2018 is likely to put the public debt on the declining path. The risks to the outlook, however, are tilted to the downside. On the external side, for example, trade actions could depress the growth of Armenia’s key trading partners including China and Russia. This would reduce demand for exports and remittances and disrupt Armenia’s economic growth. Also, an unexpected tightening of global financial conditions could lead to capital flow reversals and sharp movements of exchange rates. Large external public debt and still high dollarization in the banking sector make Armenia vulnerable to such developments. On the domestic side, the risks to economic resilience and growth could stem from slower implementation of the structural reform agenda.

ARKA: The latest review by Moody’s notes that Armenia will face the risks of financing Eurobonds. How obvious are these risks, and what ways to overcome the debt burden do you see?

Ustyugova: Indeed, a US$ 500 mln. bond is maturing in September 2020. There are risks, as I mentioned before, that further tightening of financial conditions or higher risk aversion may lead to higher financing costs for rolling over this debt on foreign markets. The authorities, therefore, will be taking into account the global financial market sentiment when assessing the pros and cons of all the options to rollover this debt. Importantly, the final decision will need to fit into the wider medium-term debt management strategy, capital market development strategy and macro-fiscal framework, as well as consider impact on monetary conditions and foreign exchange market.

ARKA: How do you assess the tax policy of the Government of Armenia and the new tax initiatives, in particular, in the direction of reducing income tax?

Ustrugova: The authorities intend to move towards a flat taxation system with a PIT rate at 23 percent. A lower flat PIT rate, in the authorities’ view, will have positive effects on economic growth and reduce the tax evasion and shadow economy. The Fund supports the objective of fighting tax evasion and reducing the shadow economy. But it also believes that these problems are too deep-seated to be solved by tax cuts alone. To be effective the reform should be aided by bold tax administration efforts. It is also important to assess the distributional fairness when changing the tax system. The revision to the PIT system may need to be accompanied by additional measures to make the tax system more progressive. Finally, when implementing these tax cuts, it will be important to develop sustainable offsetting tax policy measures to safeguard the fiscal space and for much needed infrastructure and social spending.

ARKA: Armenia plans to introduce a system of total declaration of incomes of citizens from January 1, 2020. In your opinion, are the economic system and society ready for such changes? What difficulties can the state face in implementing this reform?

Ustyugova: In our view, introducing final reporting of personal income through the individual tax returns would be an important step for Armenia towards enhancing tax compliance and reducing shadow economy. The ability to gather comprehensive, accurate and timely information on the income of individuals is an essential for effective tax revenue collection. The worldwide working patterns, as you know, have changed with many taxpayers having more than one job or frequently moving jobs, and the number of people with multiple sources of income has increased. It, therefore, becomes increasingly difficult for the tax administration to bring together a complete picture of an individual’s income. Individual tax returns provide comprehensive information and facilitate screening of taxpayer records and cross-referencing with the other records. This encourages the correct reporting of tax liabilities and effectively reduces tax evasion. Worldwide, such final tax reporting mechanisms have evolved to become a significant and even transformational element of revenue authorities’ e-services strategy worldwide. For the personal income tax, almost half of revenue administrations using elements of this method. Of course, it is important to think how to facilitate the transition to the new system and help the taxpayers fill the tax returns. The system, for instance, can be implemented through the provision of pre-filled tax returns to individuals. The revenue body – the SRC in Armenia’s case – could use information on taxpayer identity and third-party reports of income and deductions to populate fields within tax returns. Then, those tax returns could be made available to taxpayers in paper or electronic forms for verification and necessary adjustments.

ARKA: Attraction of investments for Armenia is an urgent need. What is scaring investors from investing in Armenia today? Can new tax changes, the fight against the “shadow” and other initiatives of the new government provide an incentive to boost investment flows?

Ustyugova: Attracting foreign direct investment and promoting domestic investment are both high priorities for raising and sustaining job-creating growth. Investment ratios in Armenia have notably declined since the global financial crisis. Business entry rates today are lower than in other regions, including parts of Africa. And the net FDI to neighboring Georgia has been consistently exceeding severalfold those to Armenia. Firms in Armenia have been facing a number of challenges that negatively influence their investment decisions. The responses from businesspersons to various surveys suggest that regulation, bureaucracy, taxes and corruption, are among the barriers to business. Access to finance and talent are also mentioned as important impediments. Alleviating these challenges requires structural measures. In this context, the Armenian government’s commitment to reducing corruption is well-placed. The ongoing efforts to promote digitalization will help facilitate fight against corruption and the shadow economy. Promoting a competitive business environment will also support investment in private sector. Complementing these undertakings with efforts to promote transparency and corporate governance, strengthen and clarify legal framework for businesses, invest in quality education and infrastructure, and improve government effectiveness would attract more FDI and boost investment domestically, laying the foundation for higher and more inclusive growth. –0–