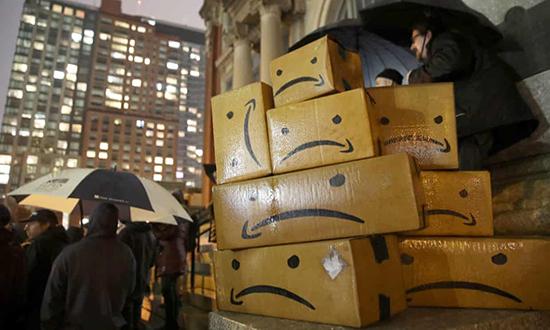 A growing number of customers are fed up with the company, from its working conditions at warehouses to anti-tax lobbying

The holiday season is all about spending the time with your loved ones and, judging by most office mailrooms, shopping on Amazon. Last year, 76% of Americans who shopped online for Christmas presents said that they planned to do most of that shopping on Amazon.

Amazon now accounts for just shy of half of all online sales in the US and Santa’s not so little helper is expected to have another bumper Christmas this year. But there are a growing number of people whose front steps won’t be graced by Amazon packages this festive season – consumers boycotting the online retailer.

No one denies the convenience of shopping on Amazon but for some there are a host of reasons – from the working conditions at Amazon warehouses, the company’s aggressive anti-tax lobbying, its impact on local business or its selling of white nationalist merchandise – that make that convenience too high a price to pay. But even those shoppers concede their boycotts come at a price.

Steven Shamrock, 51, had been considering boycotting Amazon for a while. First when he learned how Amazon workers were treated. Jeff Bezos might be one of the richest men in the world, but Amazon’s median salary is a paltry $28,446 a year. The second time Shamrock considered boycotting Amazon was when he read about the company’s dominance in web services. Amazon Web Services controls around 45% of the world’s cloud-computing capacity and provides the web services for customers ranging from Netflix to the CIA to the UK’s Ministry of Justice.

The last straw came in May of this year when he read that Amazon was banning customers who made too many returns.

“If a company gets so big, they can start picking and choosing their customers, it’s really not a business that promotes competition,” said Shamrock, who runs his own public accounting practice in the Chicago area. According to him, nothing is good in extremes, especially large companies that can end up controlling prices or distorting them. “I think anytime a company gets that large and gets that much economic power, it never ends well.”

Recently, Amazon announced that it was going to start paying its employees at least $15 an hour and that it will exert some of its influence on Capitol Hill to lobby for an increase in the federal minimum wage. While on the surface this announcement seems to benefit the workers, the move also benefits Amazon. With the unemployment rate dropping below 4% and fewer Americans looking for jobs, companies have been scrambling to attract potential job candidates. And in order to get all those Amazon Prime packages out on time for the holidays, Amazon had to hire 100,000 more people this year.

Shamrock, who said he might reconsider his boycott if the company were to treat its employees better, was not impressed by the news.

“The increase is still not to a living wage and I have not heard of any improvements in working conditions. We are still boycotting Amazon,” he said. His wife and their twin 21-year-old sons have also joined the boycott.

Laura Klein, too, would like for Amazon to make more effort in order to get her to end her boycott. When she gets an urge to shop, Klein goes online and checks whether Amazon is still streaming NRATV, the National Rifle Association’s streaming media service. Shopping on Amazon is very convenient, but for the last 10 months Klein has been boycotting the company.

Klein decided to boycott Amazon shortly after the school shooting in Parkland, Florida, in February that claimed 17 lives. At the time, the New York Times published a feature about NRATV, the National Rifle Association’s online TV channel which broadcasts pro-gun content and is streamed by Amazon Fire TV as well as Apple TV and Roku. It wasn’t long before calls for Amazon boycott spread like wildfire across the internet. Months later, nothing has changed.

As a result, Klein has done most of her holiday shopping at a local brick-and-mortar store and has resolved to boycotti the second season of The Marvelous Mrs Maisel, which premiered on Amazon Prime on 5 December.

Every time Klein has to make a purchase online, she has to remind herself not to go on Amazon. That’s why she continues to check if they are still streaming NRATV.

“Because if they stop, then I’d say: ‘Oh, wonderful! I would love to do business with them again!’ But as long as they continue to, I just can’t. Morally, I just can’t,” said Klein, 45, who lives in New Jersey and works in pharmaceutical marketing during the day. In her spare time, she works as an interfaith minister.

The decision was not an easy one. Klein has been shopping on Amazon since the 90s, when she used the website to buy books and CDs. By 2018, she bought almost everything via Amazon – even her groceries. She had supported boycotts before of companies like Chick-fil-A, which faced a backlash for opposing same-sex marriage. However, those boycotts didn’t really affect her personally because she wasn’t really buying from those companies that much anyway.

“I thought: ‘Oh, that’s a really good idea,’ but I wasn’t the one giving something up and in giving up my business with Amazon, I wasn’t just giving up on things. It felt like I was giving up pretty much everything,” said Klein. This boycott felt like a breakup. “I really had to think about: how do I buy things now? Where do I go? What do I do? I’ve gotten so used to not going to a physical store or using other online sources for shopping and figuring out how else to buy ebooks. It was really almost like starting from scratch in a lot of ways.”

Amazon is not simply a marketplace. For many loyal shoppers, it’s a way of life.

To resist the temptation of Amazon, Klein deleted all Amazon apps from her phone and iPad. She started shopping for groceries in the store and has been reading books that she bought in the past but hasn’t gotten to yet. Throughout the months, she would occasionally tweet about her experience with the hashtag #boycottAmazon.

Experts are not convinced that boycotts work. “While I suspect that corporate protests or proposed boycotts rarely lead company executives to ‘see the light’, morally speaking, the bad PR surrounding them can be prohibitively expensive,” said John Paul Rollert, adjunct assistant professor of behavioral science at the University of Chicago Booth School of Business.

There are recent examples of successes. Take Bank of America, said Rollert, which was forced to scrap a $5-a-month fee for using one’s debit card to make purchases unless a customer had a minimum of $20,000 in her bank account. “Bank of America floated the plan in late September of 2011, at the height of the Occupy Wall Street Movement. Within a week, one of their customers started a Facebook campaign proposing a ‘Bank Transfer Day’ on 5 November. The protest got so much attention that, on 1 November, Bank of America caved and rescinded the plan.”

The potential loss of business was enough to make Bank of America reverse course but perhaps Amazon is just too big to boycott. For years, some spurned Amazon in favor of local bookshops. Then more recently, people sat out Prime Day in solidarity with workers protesting against the company in Europe. Yet Amazon barely shrugged and continued growing. Earlier this year, the company disclosed that the number of Prime members surpassed 100 million. More new members signed up for Prime in 2017 than in any other year.

Both Shamrock and Klein know of no one else that is actually boycotting Amazon. Klein’s friends told her they would give it a try, but she doesn’t know if they actually went through with it.

The few times that the boycott has come up in Shamrock’s conversations, he said others were “a little bit confused” and then just moved on.

In order for such boycotts to work, “a lot of people have to do it, obviously”, said Shamrock. “But I haven’t heard of any large-scale efforts for that.” His guess is that Amazon is too convenient – and too big.