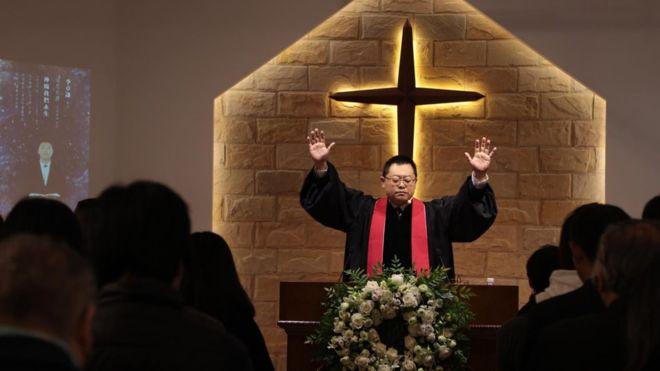 A recent surge of police action against churches in China has raised concerns the government is getting even tougher on unsanctioned Christian activity.

Among those arrested are a prominent pastor and his wife, of the Early Rain Covenant Church in Sichuan. Both have been charged with state subversion.

And on Saturday morning, dozens of police raided a children’s Bible class at Rongguili Church in Guangzhou.

China is officially atheist, though says it allows religious freedom.

But it has over the years repeatedly taken action against religious leaders it considers to be threatening to its authority or to the stability of the state, which, according to Human Rights Watch, “makes a mockery of the government’s claim that it respects religious beliefs”.

The government pressures Christians to join one of the Three-Self Patriotic churches, state-sanctioned bodies which toe the Communist Party line and are led by approved priests.

Silencing of a critic

Despite this, the Christian population has grown steadily in recent years. There are now an estimated 100 million Christians in China, many of them worshipping in so-called underground churches.

Wang Yi is the leader of one such church, the Early Rain Covenant Church in Chengdu, the capital of south-western Sichuan province.

The church is unusual in that it worships openly and regularly posts evangelical material online. The church says it has about 800 followers spread across the city. It also runs a small school.

Pastor Wang is also known for being outspoken – he has been fiercely critical of the state’s control of religion and had organised a widely shared petition against new legislation brought in this year which allowed for tighter surveillance of churches and tougher sanctions on those deemed to have crossed the line.

On 9 December, police raided the church and arrested Pastor Wang and his wife Jiang Rong. Over the following two days, at least 100 church members, including Wang’s assistant, were taken away.

One member of the church, who asked not to be identified for fear of reprisals, told the BBC that the lock on the church school had been broken, churchgoers’ homes had been ransacked and some were “under house arrest or are followed all the time”.

She said police and other officials had been going to congregants’ homes to pressure them to sign documents pledging to leave the church and to take their children out of its school.

“On Sunday, some members tried to gather at other places for worship, but got taken away as well. The Church building has been manned with police and plain-clothes officers, not allowing anyone to enter to do worship service.”

The church alleges that some of those detained and then released were mistreated in custody.

Forty-eight hours after he was arrested, Early Rain Covenant Church released a letter from Pastor Wang, which he had pre-written for release in case something like this ever happened to him.

In it, he said he respected the Chinese authorities and was “not interested in changing any political or legal institutions in China”.

But he said he was “filled with anger and disgust at the persecution of the church by this Communist regime”.

“As a pastor of a Christian church, I must denounce this wickedness openly and severely. The calling that I have received requires me to use non-violent methods to disobey those human laws that disobey the Bible and God,” he said.

Pastor Wang and his wife – who have an 11-year-old son – have been charged with inciting subversion of state power, one of the most serious crimes against the state and a charge which is often used to silence dissidents. It carries a potential jail term of 15 years. Several senior members of the church face similar charges.

Across the country in Guangzhou, the doors have also been sealed on the Rongguili Church, another un-sanctioned community.

On Saturday, a children’s Bible class was interrupted by the arrival of dozens of police officers.

Witnesses said they declared the church an illegal gathering, confiscated Bibles and other materials and shut the doors.

Officers took names and addresses and ordered everyone present to hand over their phones.

In September, the Zion church, one of the largest unofficial churches in Beijing was abruptly shut down. It had recently refused a request from the government to install security cameras to monitor its activities.

“I fear that there is no way for us to resolve this issue with the authorities,” Pastor Jin Mingri told Reuters news agency at the time.

There have also been a string of church demolitions, forced removal of crosses or other arrests over the year.

Human Rights Watch said the raids at Early Rain and at Rongguili Church were a further sign that under President Xi Jinping, China is seeking to tighten control over all aspects of society.

“As major holidays in many parts of the world – Christmas and New Year – are approaching, we call on the international community to continue to pay attention to the situation of China’s independent churches and speak against the Chinese government’s repression,” said the group’s Hong Kong-based researcher Yaqiu Wang.

The Early Rain member who did not want to be identified said the idea of the Three-Self Patriotic churches was “hilarious”, saying they “don’t spread genuine gospel, but spread the thoughts of loving the Party, loving the country”.

Another Christian in Chengdu told the BBC such churches were “against Jesus, against gospel”.

He described the scale of the operations against Early Rain as “unprecedented” but said more could be expected, adding: “I’m very lucky they haven’t found me yet.”

The Early Rain community would survive, he said, but would now go further underground.

“We will continue the gathering. The church is shut down so it’s impossible to have a big gathering, but there will be small gatherings on Sunday and on Christmas Day.”

Ultimately, he said, repression might even increase the profile of the faith in China.

“Without repression, people may doubt about our religion. But when repression occurs, pastors and members’ reactions will make people who don’t believe in Jesus realise the charm of Christianity.”