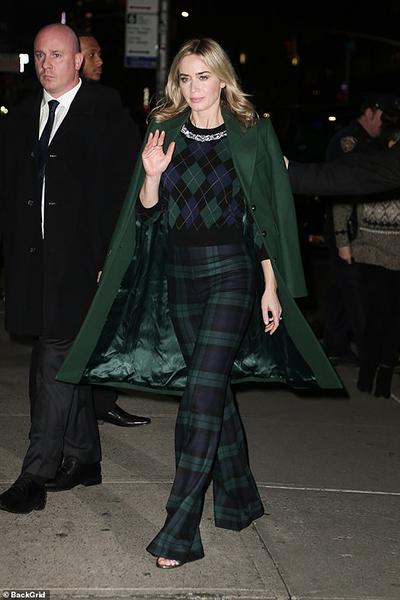 It has taken 54 years for a sequel to emerge to Walt Disney’s crown jewel, Mary Poppins, but to say the wait was worth it is an understatement for a movie that is practically perfect in every way — actually make that perfect in every way. Considering the legacy that it is up against, director Rob Marshall’s achievement here is remarkable. Certainly a modern master of the movie musical (Chicago, Into the Woods, Nine, Annie), Marshall has made a film that is reverential to the beloved original but enriches the experience of those who fondly remember the 1964 classic that won five Oscars from 13 nominations while also creating something with real original movie magic for new generations.

David Magee’s screenplay doesn’t take off from the ’64 version as much as all eight of the Mary Poppins books from author P.L. Travers, who famously did not love the Disney movie (the studio even made a film about the travails of its making called Saving Mr. Banks in 2013). Here Michael and Jane Banks, the children in the original are now all grown up as the movie is set 24 years later, and Michael (Ben Whishaw), a recent widower, is the father of three and facing tough times and a foreclosure on the famous Cherry Tree Lane family home. Jane (Emily Mortimer) is a frequent presence in their lives, but this clan needs help.

Enter Mary Poppins (Emily Blunt), who has come to bring magic and imagination into the children’s lives after the death of their mother — but also to once again bring hope to Michael. She’s still the strong nanny, but in Blunt’s hands she also is more stern and commanding, something closer to the description of Poppins in the book. Off she goes into wondrous worlds of discovery as she introduces the kids to places they never had dreamed possible, just a simple trip through the bathtub and into dreams.

Blunt, taking on the difficult task of doing a role that made Julie Andrews a Best Actress Oscar winner and one with which she has been associated her entire illustrious career, is simply sublime (already a Golden Globe, Critics’ Choice and SAG nominee), putting her stamp on the character and making it her own. She’s wonderful, as is Lin-Manuel Miranda — in his first major screen role as Jack the Lamplighter, a guy who lights up the world literally and figuratively. He and Blunt are terrific together in their musical scenes and elsewhere.

Of course every movie has to have a villain, and in this case it is the banker (Colin Firth), who is determined to foreclose of the Banks’ home. The whole cast is swell, but it is especially gratifying to have one-scene cameos from the likes of Meryl Streep, in for a fun musical number as Cousin Topsy; Angela Lansbury, showing up near the end as the Balloon Lady; and best of all, Dick Van Dyke, the original Bert the Chimney Sweep, returning as the son of Mr. Dawes Sr., the banker he also played (under heavy old-age makeup) in the original film. The 93-year-old icon doesn’t need the aging help now, but he proves ageless in a show-stopping desktop tap dance.

The production team is first-rate here and ought to be racking up close to the number of nominations that were accorded the original artisans of the 1964 film (still a near-record Academy noms). Of course it is hard to top the Oscar-winning songs and score from the Sherman Brothers, but composer Marc Shaiman and his co-lyricist Scott Wittman do their best to carry the baton and come up with some real toe-tappers that seem perfectly at home in the Poppins world. The plaintive “The Place Where Lost Things Go” is particularly moving. Two songs, including that one, as well as Shaiman’s great underscore have already been shortlisted for Oscar nominations, and deserve them. They don’t miss a beat. Producers are Marshall, John De Luca and Marc Platt.

It would be easy to dismiss a musical return to the world of Mary Poppins as just a great Disney entertainment, but for these dark times, Mary Poppins Returns is so much more — a much-needed tonic to light up lampposts around the world. She returns with that impeccable timing, just when we need her brand of magic the most. Disney opens it Wednesday. Check out my video review by clicking the link above.

Do you plan to see Mary Poppins Returns? Let us know what you think.