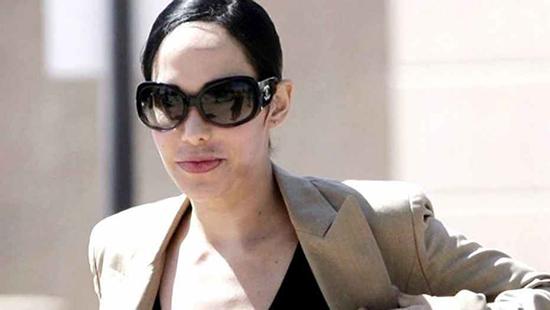 Nadya Suleman, known to the world as “Octomom,” doesn’t appreciate the moniker — and sees herself as “a classic victim” of the media, of her doctors and of her management team, Suleman said in a new interview.

She now goes by Natalie, The New York Times reports, not Nadya. She lives in a three-bedroom home with her massive brood: In addition to the octuplets (the only surviving octuplets on record), who are now 9 years old, she also has sons Caleb, 12; Aidan, 13; Joshua, 15; Elijah, 17; and daughters Calyssa, 12; and Amerah, 16, the latter of whom reportedly acts as a second mom to the rest of her siblings.

The octuplets do not know their father, though Suleman claims that she may let them meet their sperm donor when they turn 18.

Suleman has a B.S. in child development and works as a counselor full time. She still relies on public assistance and “international photo shoots” to support her large family. Some of her kids sleep on the couch. Allegations of child neglect, famously brought upon her by Gloria Allred, she says, proved false. (Allred declined to comment to the Times.)

“I was misled by my doctor,” Suleman said of her implantation with 12 embryos — six times the recommended amount. Suleman’s doctor, Michael Kamrava, who worked with her on her six pregnancies prior to “the eight,” has since lost his medical license and left the United States.

Suleman alleged that she only wanted twins and that Kamrava convinced her to implant the extra embryos when she was high on narcotics and strapped to a gurney. Kamrava previously denied this, claiming that Suleman pressured him into implanting the embryos.

Her pregnancy caused her to break her ribs, and despite being fit now, she says her back is broken and proudly rattles off lists of ailments she allegedly suffers, but none as painful as her treatment by the public, she says.

“I have PTSD from all the reporters coming in over the years. I would take whatever I could back in the days, and I would let them in. I was spiraling down a dark hole. There were no healthy opportunities for Octomom,” she lamented. “I was doing what I was told to do and saying what I was told to say. When you’re pretending to be something you’re not, at least for me, you end up falling on your face.”

“Octomom was media-created,” she snapped. “I believe most media is filtered and fake. They created this caricature.”

“I wanted to quit, but my manager said, ‘If you do, I’m reporting you to welfare for fraud.’ I gave my bank account to her to control because I was so overwhelmed and busy managing my family,” Suleman said. “Checks that were forged — minimum $60,000 was stolen in six months. And she was selling stories left and right. She was a predator.”

The stress associated with Suleman’s life and choices led her to a rehab stint for alcohol and prescription drugs.

She says she’s open with her children about all the issues facing them in their lives.

“We talk about everything. They know, they went through it with me,” she said. “It’s a huge weight lifted off of all of them when I went back to who I was. We were struggling financially, but it was such a blessing to be able to be free from that. Those were chains.”

Despite claiming she doesn’t like attention, Suleman is currently working on a book, she told The Times.

“I was pretending to be a fake, a caricature, which is something I’m not, and I was doing it out of desperation and scarcity so I could provide for my family,” she said. “I’ve been hiding from the real world all my life.”