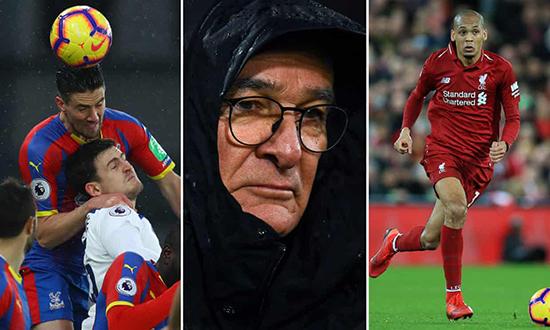 Maurizio Sarri fell short of accusing his players of complacency, but admitted something strange keeps happening when his Chelsea team appear to be in complete control of matches. At Wolves recently their early lead was overhauled and they were beaten. They had more leeway at Brighton with a two-goal cushion established but still ended a contest, in which they had been utterly dominant, heaving to repel Albion’s late flurry of attacks. Every long ball suddenly seemed a threat, every set piece a route to parity. It ensured what had been an impressive display felt rather undermined at the death. “We are a danger to ourselves,” admitted the Italian. It is affecting some more than others in their ranks, with Marcos Alonso’s early-season composure having evaporated of late. He rather personifies this team’s current fragility in periods within games. They escaped real damage at Brighton. “But suddenly the level of application and attention lowered,” added Sarri. That, in truth, does sound like complacency at work. Dominic Fifield

2) Kelly a hero for just one day for Palace

In a senior career spanning just over a decade Martin Kelly has made fewer than 200 appearances in all competitions for Liverpool, Huddersfield and Crystal Palace combined. Injuries have taken their toll on the 28-year-old, not least a ruptured cruciate ligament and thigh problems that sidelined him for the best part of a year. Those aside, he has developed a perhaps unwanted reputation as a diligent, low-maintenance understudy. At Palace he sits on the substitutes’ bench far more often than not now Aaron Wan-Bissaka has made the right-back berth his own. Kelly’s limited appearances this season have been at centre-back and with James Tomkins suspended he started alongside Mamadou Sakho against Leicester. With Sakho calling the shots in the role of senior partner, Kelly was immense as his side kept a rare clean sheet. His reward will almost certainly be a return to the dugout now that Tomkins has served his ban. Barry Glendenning

3) Ranieri needs help from current squad and next month

Claudio Ranieri said it was too soon to talk about the January transfer window while also admitting his Fulham squad requires refreshing. “I am honest, I speak with my owner and he understands we must do something,” he said. Shahid Khan, having spent more than £100m in the summer, is on the hook for further spending if Fulham are to have a chance of staying up. Gary Cahill, an outcast at Chelsea, has been linked of late. Something needs to be done about a defence that collapsed for West Ham’s decisive first-half goals but Ranieri also needs far better from the players that he inherited from Slavisa Jokanovic. Jean Michaël Seri had the highest billing of Fulham’s hefty summer spree but was a lost soul in a midfield that Declan Rice and Mark Noble took hold of. The Ivorian’s 61st-minute substitution received a chorus of ironic cheers from home fans. John Brewin

The loss of Aaron Mooy to a knee injury that is expected to keep him out until February is a serious blow to Huddersfield. Yet they did not particularly miss the Australian during Saturday’s defeat by Newcastle because Juninho Bacuna, a summer recruit making his first Premier League start, did well alongside the excellent Philip Billing and Jonathan Hogg. That trio helped Huddersfield to dominate in possession terms. But the team lost because of familiar bluntness up front. None of the attacking players signed in the summer – Ramadan Sobhi, Isaac Mbenza and Adama Diakhaby – have made an impact and the existing centre-forwards, Laurent Depoitre and Steve Mounié, have not got goals to complement their otherwise useful work – unlike Newcastle’s Salomón Rondón. Sharper January signings would help Huddersfield climb out of trouble. Paul Doyle

As recently as last month there were rumblings that after a slow start to life at Anfield, Fabinho might be in line for a January departure. If it was nonsense then – and Jürgen Klopp always stressed he had a long-term plan for the player – it is cloud cuckoo land now. He was the best player on the pitch against Manchester United, delivering the wonderful chipped pass from which Sadio Mané opened the scoring and using the ball superbly throughout. Fabinho exuded control without diminishing Liverpool’s urgency; this was only his sixth Premier League start but he is surely in the side to stay and Jordan Henderson, for one, faces a battle to get back in now. Klopp has a formidable selection of central options these days and Fabinho, looking fresh and fully accustomed to the pace of the English game, has risen sharply towards the top of the pack. Manchester United may have had an £89m midfielder on the bench but what a difference the Brazilian’s quality might have made to them. Nick Ames

Manchester City’s first goal against Everton came after a sloppy clearance from Yerry Mina, although it is worth wondering why the centre-back had possession in the first place. Mina was dealt a short pass by Jordan Pickford within yards of the byline and, with Riyad Mahrez bearing down at speed, panicked; it would be a stretch to imagine even one of Pep Guardiola’s vintage Barcelona teams contriving a slick back‑to‑front goal from that position and what followed was a reminder that sometimes idealism should be put to one side. Marco Silva said Mina should have returned the ball to Pickford or cleared it on the other side but the issue would have been avoided if the goalkeeper had made the correct calculation of risk versus reward. “We have our way of playing,” Silva said, emphasising that the responsibility for such a mistake was his own but a little compromise here would have given Everton a chance to build on a strong start to the game. Permitting the occasional launch upfield does not have to turn you into the next Charles Hughes. NA

While it is too soon to apply too much analysis to Ralph Hasenhüttl’s early work, he unquestionably has Southampton playing with a zip and verve seldom seen during the ponderous and predictable days of Mark Hughes and Mauricio Pellegrino. However, to rescue Saints’ season completely, drastic surgery is also required at the defensive end. Jan Bednarek is one of the subtle tweaks Hasenhüttl has made to the starting XI, the Pole having largely been ignored by Hughes, and he was excellent against Arsenal. Playing on the right of a back three, the 22-year-old dramatically reduced the threat of Alexandre Lacazette’s second-half introduction while one outstanding interception denied Pierre-Emerick Aubameyang a regulation first-half tap-in. There are serious questions over the quality and suitability of the squad at his disposal but, in Bednarek, Hasenhüttl may have discovered an individual around whom he can build his new-look defence. James Piercy

With the news that Eric Dier will be out until next month after having his appendix removed, Tottenham might be seeing a lot more of the 18-year-old midfielder Oliver Skipp. Mauricio Pochettino said the youngster “played like a 30-year-old man” against Burnley on Saturday, all the more remarkable given he did not know he was starting until just over an hour before kick-off. Leaving it so late to tell Skipp might have been a result of circumstance – Dier was admitted to hospital on Saturday afternoon – but in the end it worked out nicely. “If you tell young players one day before they start to play the game [in their head],” Pochettino said. “They arrive for the game tired, because you expend a lot of energy thinking. [If they’re told later] you don’t have time to think too much, and you play with freedom.” Nick Miller

Watford’s key performers against Cardiff were Gerard Deulofeu and Abdoulaye Doucouré. Aged 24 and 25 respectively, they are players whom the Hornets could count on for years to come (provided they can hold on to them, of course). But Vicarage Road is bedding in an even younger generation. Adalberto Peñaranda, Ben Wilmot and Domingos Quina are under-21 talents knocking on the door of the first team. In the case of Quina, the 19-year-old Portuguese midfielder has had two strong performances in a week, and became the club’s youngest goalscorer with a pearler on Saturday. “I didn’t know many things about Domingos before he came,” Javi Gracia said. “Now I can see him every day training; his level, his desire, his ambition. It is good for me to work with these young players, like Ben Wilmot too. I think they are good players and you have to put these players in.” Paul MacInnes

With five goals and five assists since his summer arrival Raúl Jiménez’s signing is starting to look like the smartest business Wolves have done since promotion. The Mexican can create and score, as Nuno Espírito Santo looks to inject swagger. The only concern is that it will cost Wolves a further £34m to make the deal from Benfica permanent – but considering he is 27 and is helping his side to relative comfort in one of Europe’s most competitive leagues, one has to assume the wheels are in motion to ensure he puts down roots. Otherwise they may need to search through the Jorge Mendes Rolodex, which will not aid the long-term stability of the Wolves forward line as they look to secure their place in the top flight. Will Unwin