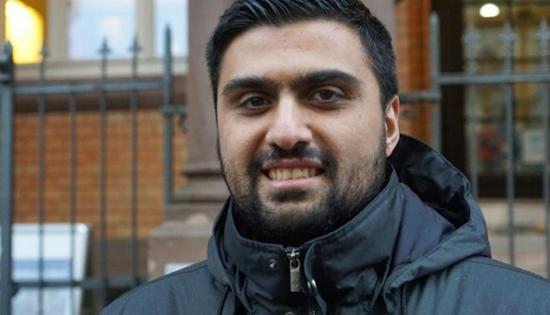 German-Turkish dual citizen and journalist Adil Demirci, who has been in pre-trial detention in Turkey on terrorism charges since April, has said his participation in the funerals of several Kurdish People’s Protection Units (YPG) militants is shown as criminal evidence against him, Deutsche Welle reported on Monday.

In April the 33-year-old Demirci, who lives in the German city of Cologne, went on vacation to Turkey. Before he could return he was arrested on terrorism charges. His trial started at the İstanbul 25th High Criminal Court in November.

Demirci is accused of membership in the Marxist-Leninist Communist Party (MLKP) and of disseminating terrorist propaganda.

Responding to Deutsche Welle’s questions from Silivri Prison where he is jailed, Demirci said: “There is not even a single piece of evidence against me in my dossier to legitimize my trial while in detention. It is obvious that I am imprisoned based on arbitrary and biased judgments. … The only evidence against me is the funerals I attended… The funerals I attended were in 2014 or 2015, and attending a funeral does not constitute a crime from a legal point of view.”

The journalist said if he had believed he had committed a crime, he would not come to Turkey on vacation.

Demirci was employed in Cologne as a social worker and as a reporter for the Etkin Haber Ajansı (ETHA) news agency.

Turkey sees the Syrian Kurdish Democratic Union Party (PYD) and YPG as the Syrian extension of the outlawed Kurdistan Workers’ Party (PKK), which has been waging a bloody war in Turkey’s Southeast since 1984.

When asked whether he believes he is being given a fair trial in Turkey, Demirci said even answering this question entails some risk for him, implying that he could face other charges for lacking confidence in the Turkish judicial system.

“I am not a jurist, but I just want to remind you of this: Is Turkey complying with ECtHR [European Court of Human Rights] rulings? The ECtHR’s Demirtaş’s ruling has not been implemented. Now it is necessary to ask whether there could be a fair trial in Turkey. My name is Adil [which means fair in Turkish], but it is hard for me to say I am getting a fair trial. If a fair decision had been made, I would not be in jail today,” added the journalist.

Demirci was referring to a ruling by the ECtHR for jailed Kurdish politician Selahattin Demirtaş as the European court said on Nov. 20 that Demirtaş’s pre-trial detention was a political act and ordered his release. Turkish courts refused to implement the European court’s ruling, and a regional appeals court in Turkey on Dec. 4 upheld a four year, eight month prison sentence for Demirtaş for disseminating terrorist propaganda.

Many Kurdish politicians in Turkey face terrorism charges or are already in jail for attending the funerals of PKK militants.