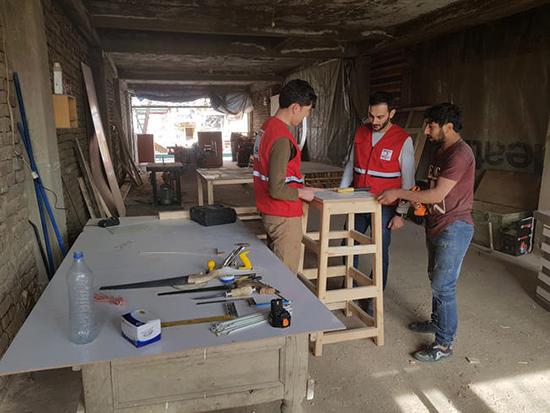 Turkey has been helping Afghan migrants returning back to their country acquire a job or have their own business, as part of a project initiated by the Turkish Red Crescent (“Kızılay” in Turkish).

The project named “Support after Volunteer Return” is carried out in cooperation with the Directorate for Migration in the Turkish Interior Ministry, Embassy of Turkey in Kabul, and Afghanistan’s Ministry of Refugees and Repatriation.

The project’s main target is to stop irregular migrants by providing job security for Afghans in their country.

So far, 10 Afghans have benefited from the Turkish-led project, with Mohammad Salim being one of these beneficiaries.

Salim, 20, came to Turkey through illegal means in 2013. He worked for six years in Istanbul and went back to Afghanistan voluntarily in July 2018. Later, he applied to the Ministry of Refugees and Repatriation in his country for them to help him to find a job.

“I am now the owner of an enterprise which was my dream. I am earning my own money and providing for my family. I thank Turkey and the Turkish Red Crescent for causing this happiness and providing an opportunity to rebuild my life,” said Salim.

Abdullah Yahya, 19, is another beneficiary of the project led by Turkish Red Crescent. He came to Turkey through illegal means earlier this year after leaving his home due to a Taliban attack in the northeastern province of Takhar in Afghanistan.

Yahya was captured by Turkish security forces and stayed in a repatriation center for a duration of two months. He then applied to the Assisted Voluntary Return Program and was sent to back to Afghanistan. As part of the project, the Turkish Red Crescent has opened a small carpenter workshop for Yahya, who had been working as a carpenter before fleeing Afghanistan.

There are also project beneficiaries working within the body of the Turkish Red Crescentafter returning back to Afghanistan. One of these people is the 25-year-old Ziyauddin Haydari.

Haydari came to Turkey in 2013, similarly through illegal means. But, due to having his shoulder blade broken, he stayed in Turkey only 12 days, and then went back to his home country. In May of this year, he started to work in the Turkish Red Crescent’s Afghanistandelegation as a driver.

Turkey has been a main route for irregular migrants trying to cross into Europe. Among the migrants held in 2017 in Turkey, the majority came from Pakistan, followed by Afghans and Syrians.

The Taliban, Afghanistan’s largest armed group, wants to establish a legal system based on a strict interpretation of Islamic jurisprudence, a conflict which has claimed thousands of lives in the country.

According to the latest figures released in July by the U.N. Assistance Mission in Afghanistan(UNAMA), 1,692 civilians were killed during the first six months of 2018 – the most recorded in the period over the last decade since the agency began documentation.