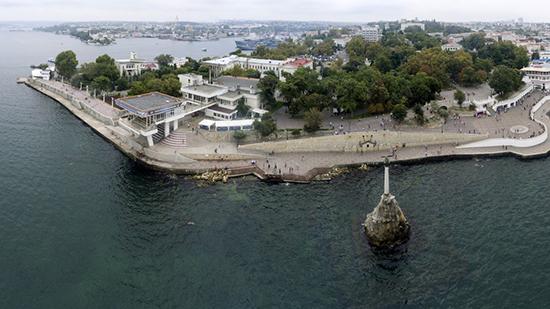 In the midst of the Crimean crisis, a special adviser to the UK House of Commons Defence Committee had a suggestion for Kiev – to lay mines in Sevastopol Bay, leaked documents have revealed.

“I am trying to get this message across” to Kiev, reads a leaked document purporting to show the strategy that Christopher Donnelly, who was a Special Adviser to the UK House of Commons Defence Committee, recommends.

The documents, leaked by a group which claims to be associated with the Anonymous hackers, purport to indicate that Donnelly had drafted “military measures” that he would implement if he, personally was “in charge.” The documents are allegedly dated March 01, 2014, when the Crimean crisis was in full swing.

Donnelly noted that “at the moment the new ‘Government’ in Kyiv is unable to think in terms of military reality,” since it was not sure if its “orders will be obeyed or not.”

“They are like a rabbit in the car’s headlights,” he said, according to the documents.

The measures which the official would supposedly implement, include “mining of Sevastopol harbor,” setting up a “cordon sanitaire” across the Crimean Isthmus with “troops and mines,” and trying to “inspire” their own troops, endeavoring to explain to them what exactly they had to fight for.

Donnelly allegedly writes that he would have used “some seriously important weapons” Ukraine “used to have,” namely some sort of “big microwave anti-satellite weapon.”

Apart from that, the text says all the air forces in the region should have been scrambled and anti-aircraft defenses activated. If the aviation in Crimea proved to be not airworthy, it should have been destroyed “as a gesture that they are serious.”

While all the “measures” appear to be designed to incite an open armed conflict, the last one was also about making profit by the West:“They should ask the west now to start supplying oil and gas. There is plenty available due to the mild winter.”

Christopher Donnelly before 2003, back then he was Special Adviser for Central and Eastern European Affairs to the Secretary General of NATO. ©  nato.int

Donnelly has a rich background that ties him to top military officials. Between 1989 and 2003, as special adviser to four NATO Secretaries General, he was closely involved with NATO. From 2003 to 2010 he ran the UK Defence Academy’s Advanced Research and Assessment Group. He has been a specialist adviser to three UK Defence Secretaries (both Labour and Conservative) and was a member of Prime Minister Margaret Thatcher’s Soviet advisory team. Since 2010 he has been the Co-director of The Institute for Statecraft – a shady think tank that provides “decision takers & policy makers with reliable, alternative solutions.”

This is the third of a number of leaks, which began on November 5. The leaks claim that the UK government-funded group “Integrity Initiative” (II), which was founded by the Institute of Statecraft, has a network of journalists, analysts and former politicians who make up a Europe-wide chain of “clusters” that help London meddle in other state’s affairs.

Commenting on the previous leak, the II neither confirmed nor denied that the documents were genuine, saying that it didn’t have time to validate them.

However, II did confirm that the organization has, indeed, been receiving funding from the British Foreign and Commonwealth Office (FCO) for the past two years, but insisted that private donors were its primary source of money. Meanwhile, in response to a question by Labour MP Chris Williamson last week, Minister for Defence, People and Veterans Tobias Ellwood admitted that the Institute for Statecraft had also received funding from the British Army and the Ministry of Defence. The FCO money came from the department’s ‘Conflict Fund’ which investigative journalist Mark Curtis exposed last year as a “secretive slush fund” which had backed “some of the world’s worst security forces.”

RT has reached out to Mr. Donnelly for comment over the contents of the “military measures” list, as well as over allegations that his organization targeted Jeremy Corbyn in an anti-smear campaign which are now being investigated by the Foreign Office. He declined to comment.

“Thank you very much for your enquiry but as RT is a state-sponsored propaganda organization and not a legitimate news channel, we have no comment to make,” Donnelly said in a mailed statement.