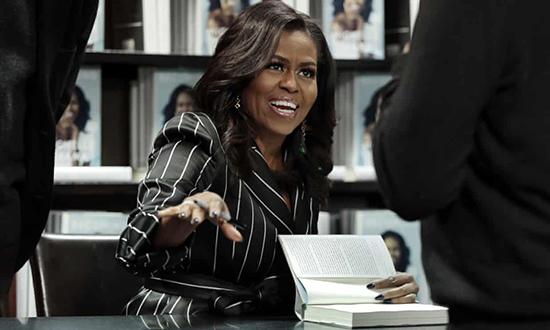 The former first lady’s memoir Becoming sold 92,000 copies last week – well ahead of Walliams, who was the bestselling author for the previous two years

Michelle Obama has unseated David Walliams as Britain’s Christmas favourite, with her memoir Becoming set to be the UK’s bestselling book during the festive period, after shifting 92,000 copies in the final shopping week before Christmas Day.

Christmas is a crucial period for UK booksellers, with the four weeks of December accounting for approximately 15% of annual book sales.

Walliams has been the bestselling author in the final week before Christmas for two consecutive years, with his children’s books The Midnight Gang and Bad Dad topping charts in 2016 and 2017 respectively. However, although his latest book The Ice Monster is currently ahead of both of his Christmas No 1s over the same period and has sold 520,000 copies since it was first published six weeks ago, it still trails Obama – 80,400 copies of The Ice Monster sold over the last week, compared with 92,000 copies of Becoming.

Obama is the first person of colour to be crowned Christmas No 1, and the first woman since JK Rowling in 2008 to take the top spot. In the UK, Becoming sold 380,000 hardback copies in the first three weeks after publication – 485,000 across all formats – while 3m copies have been sold in the US.

On Tuesday, Walliams tweeted his congratulations to Obama. “You are rightfully sitting at the very top of the tree like the shining light you are,” he wrote.

Other bestsellers in the last week include personal trainer Joe Wicks’s latest cookbook in his bestselling series, Veggie Lean in 15; this year’s version of the perennial Christmas favourite, Guinness World Records 2019; and Craig Smith and Katz Cowley’s picture book The Wonky Donkey, which took off after a home video of a Scottish granny collapsing with laughter while reading it to her grandson went viral. The 2009 picture book sold just under 30,000 copies this week alone.

Nielsen BookScan, which gathers data from 6,500 booksellers around the UK, reports that book sales are up by £22m year on year, with 2018 looking to beat even the bumper £1.59bn sales seen in 2016, a year when booksellers were armed with a new Harry Potter book – Harry Potter and the Cursed Child – and the first Wicks cookbook.

At Waterstones, Bea Carvalho hailed the performance of the book chain’s bestselling novel of the year, Sally Rooney’s Normal People, which she called “a universally relatable modern romance which is unparalleled in its wide appeal”. She also noted strong performances from books on vegetarian and vegan food, in particular The Green Roasting Tin, one of Waterstones top cookery books in a category normally dominated by celebrity chefs.

Other big sellers at the book chain this Christmas include Posy Simmonds’s “gleefully dark and charming Christmas fable” Cassandra Darke, Scarlett Curtis’s Feminists Don’t Wear Pink, and Frann Preston-Gannon and Fiona Waters’s collection of illustrated nature poems for every day of the year, I Am the Seed That Grew the Tree.

A collection of stories by AS Byatt, Michael Morpurgo and Lennie James, Home for Christmas, has also been selling well: profits are being donated to central London homelessness charity the Passage, and it is on sale at Daunt Books, Waterstones and Foyles in London.