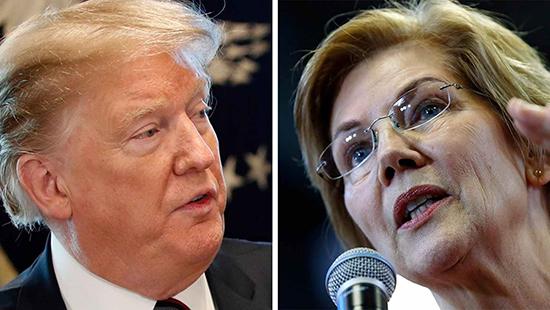 President Trump mocked Sen. Elizabeth Warren, D-Mass., over her New Year’s Eve Instagram livestream Sunday night, saying that the video would have been a “smash” if it had been done “from Bighorn or Wounded Knee instead of her kitchen.”

Warren, 69, who had announced her candidacy for the White House earlier in the day, cracked open a beer and took some questions from her social media followers in an apparent attempt to channel the social media efforts of younger Democratic pols like Reps. Alexandria Ocasio-Cortez and Beto O’Rourke.

Trump revived one of his favorite nicknames for Warren and even jabbed at her husband, saying he should have been “dressed in full Indian garb.”

“Best line in the Elizabeth Warren beer catastrophe is, to her husband, ‘Thank you for being here. I’m glad you’re here’” The president said in a follow-up tweet. “It’s their house, he’s supposed to be there!”

In the video, the liberal firebrand had a craving for alcohol: “Hold on a second —  I’m gonna get me a beer,” she said, as she walked out of view of the camera.

“Um, want a beer?” she then asked as her husband, Bruce Mann, briefly entered the room.

“No, I’ll pass on a beer for now,” he responded. Then, matter-of-factly from across the camera as he left the kitchen, he offered a quick farewell: ”Enjoy your beer.”

Trump often has derided Warren for her claim of having Native American ancestry.

In October, Trump demanded Warren apologize for claiming Native American heritage as part of what he called a “fraud” against the public, mocking her recently released DNA test as ”bogus.”

The test results revealed Warren likely has trace amounts of Native-American ancestry. While she used the results to counter allegations she lied about that ancestry to get ahead in academia, Trump and other Republicans highlighted how diluted that ancestry was revealed to be.

At a rally in July, Trump joked that he would pull out a heritage kit during a hypothetical presidential debate with Warren, and slowly toss it at her, “hoping it doesn’t hit her and injure her arm, even though it only weighs probably two ounces.”

Warren visited the early primary state of New Hampshire Saturday to deliver a message of economic populism and clean government.

This was Warren’s first visit to New Hampshire since launching her exploratory committee for the 2020 campaign. Besides advocating for reforms to health care, student debt, and the minimum wage, Warren touched on breaking news with a call for an end to the ongoing partial federal government shutdown, which is now the longest in American history.