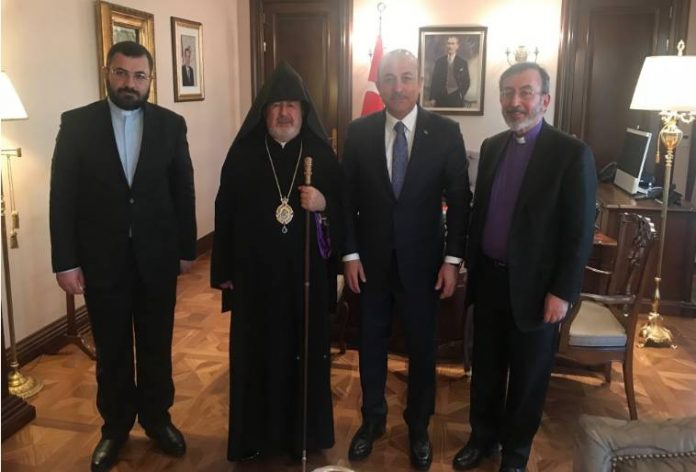 Asbarez – Archbishop Khajag Barsamian, representative of the Armenian Church at the Vatican and Shahe Ananyan, Director of the Inter-Church relations Department of the Holy See of Etchmiadzin met with Turkish Foreign Minister Mevlut Cavusoglu in Ankara on Monday to discuss the election of the Istanbul Patriarch, which has been marred by government interference that has created tensions within the Patriarchate. Agos first reported on the meeting, which was also Patriarchate’s Vicar-General Archbishop Aram Ateshian, who has been at the center of controversy for effectively carrying out the government’s wishes.

According to Agos, the Patriarchate issued a statement saying a “sincere” dialogue took place during the hour-long meeting, during which Cavusoglu said that the state was following the developments of the election closely, but urged patience by the church’s leadership.

“The minister received us very warmly and I made it clear that my goal was not to interfere from outside, but express our concerns and understand the ways we can be useful,” Archbishop Barsamian, who is the former Primate of Eastern Diocese, told Agos.

“The minister said that he also understands that it’s a problem and noted that the state also wants the Patriarchal elections to take place, but it was necessary to wait a little for that,” added Barsamian without specifying the reasons for the delay.

After the Istanbul Patriarch Archbishop Mesrop Mutafian was declared unable to carry out his duties due to illness, the Patriarchate’s religious council came up with a timetable to hold the elections. To facilitate this effort, Archbishop Karekin Bekjian was elected Locum Tenens of the Patriarchate. However, the Istanbul Governor’s office, acting on orders from Ankara, deemed the election unlawful and installed Ateshian as Vicar-General, prompting Bekjian’s retreat from his elected position.

Garo Paylan, an Armenian member of the Turkish Parliament representing the People’s Democratic Party (HDP) has raised the issue of the election of a Patriarch in the legislature and has called for official Ankara to allow the Armenian community to carry out the elections on its own terms.