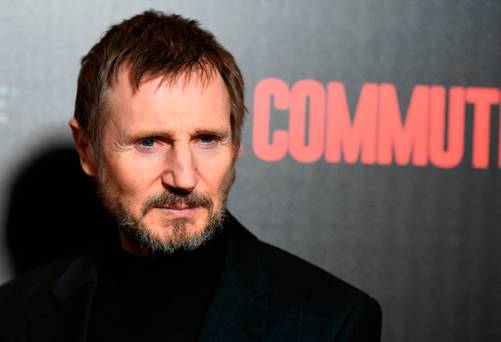 What conversation is that, the celebrity booker asked. ‘Like, a man walks into a bar and says: “Which one of you guys wants to get coshed to death for being black?”’

As seen by Marina Hyde  –  The Guardian

So I got a call from a British newspaper reaching out for comment. “Sure,” I say. “On what?” She says: “Your client Liam Neeson took the opportunity of a 17-minute promotional interview for his new movie Cold Pursuit to reveal that when a friend of his was raped in the past, he asked what colour her attacker was, then went out to black-populated areas in his city with a cosh, for maybe a week, hoping that some ‘black bastard’ would come out and have a go at him for something so he could kill him.”

And I said: “OK. Let me call you back. Wait – before you go – are those airquotes round ‘black bastard’ yours or his?”

We immediately convened a war room in the agency, and our first thought was that this was the worst shit Liam had been in, including Phantom Menace.

But, you know what, that was the end of the negativity. From that point on, I reminded my brainstormers that there are no bad ideas – even stalking black neighbourhoods with a cosh, hoping to kill an innocent man, is not, in itself, a “bad idea”. I did the airquotes. The smart move is to realise we are just looking at this thing the wrong way.

Ancient oriental martial philosophy has long been core to our approach and it remains so to this day. And it wasn’t long before someone brought up that incredibly powerful Sun Tzu quote: “Many battles are won by people totally not actually noticing they are being fought.” Like, maybe no one will see the interview? Or maybe it will appear on a day that Harrison Ford or Steven Spielberg also recall youthful lynching fantasies. We agreed the courageous thing to do here was to simply decline to comment. I don’t think we need to feed this story. It does not behove – behoove? – us to stoop to the level of feeding stories.

OK, so, it turns out people did see the interview.

Took a 6am call from a delighted rival, who cackled that I must be losing my mind over this. And I was like: “What? I’m extremely relaxed. I’m at home on my running machine, powerwalking. Wait – I think I just saw a shadow in my yard. Oh, that’s OK. It’s just my gardener.”

Of course, the reason I’m so relaxed, apart from the powerwalking, is that we no longer live in those dark, unsophisticated days where it was OK to react to some ludicrous celebrity utterance with the verdict: “God, what a complete asshole. I mean, really, what an out-and-out fucker.” These days, there is really NO utterance too outlandishly vile or fist-gnawingly batshit that people will not regard it as having “started an important conversation”.

And that, in an incredibly real and ideally even lucrative way – let’s not rule lucrative out – is what Liam has done. Cinema’s Liam Neeson has Started An Important Conversation. it was the first thing I said to Good Morning America’s booker when she wanted to get Liam on to apologise. I said: “Actually, Liam has started a really important conversation.”

And she goes: “What conversation? Like, a man walks into a bar and says: ‘Which one of you guys wants to get coshed to death for being black?’”

And I said: “Don’t get uppity with me. You’re stuck on the non-conversation. You’re looking at this from the wrong angle. The meta-conversation, that all the really rational people are having, is about revenge, masculinity, sexual politics and the dark places that exist within us all. It’s really nothing to do with standing outside bars hoping a suitable black murder victim would emerge with the time-worn inquiry: ‘Want some?’ So confident am I,” I told her, “that Liam has started a conversation, that I am going to let him go on your show and talk some more. And he’s booked with Ryan Seacrest after that.”

I watched both of Liam’s TV appearances and he did a great job. Perfect. The most moving bit was when he talked about the hurt he had felt, but how he had been helped by a priest blah blah blah, “and, believe it or not, powerwalking”.

I can and do believe it. Need to put a call into StairMaster. In terms of sponsorship potential, Liam might just have started an incredibly important conversation.

Meanwhile, the movie. We still had the Cold Pursuit premiere in Manhattan, but we didn’t do a red carpet. Pulling that section of the evening was a delicately balanced call. You know, I’m fine with the whole “Who are you wearing?” line of questioning, but if the follow-up is something like, “Could you just demonstrate the size of the cosh you took to black areas to potentially kill someone?”, then I think that is a situation we’d want to keep the talent out of.

Well, as predicted, this is unrolling in a distinctly non-apocalyptic way as far as meaningful fallout goes. I’m extremely happy. For the first day or so of this crisis, I’d see something on the metaphorical horizon, and I’d think: Is that a Zulu? Is it bad? Is it good? Ooh, it’s a think piece – but I can’t make out what it says yet. And yet, as they hove – hoove? – into focus, most of these things just said: It’s good and important to talk about our sustained attempted lynching sprees. I mean, who among us?

In fact, I’m thrilled to see the waves this conversation is making around the world. There was a guy on British TV, a John Barnes, who judged that people would now be afraid to tell the truth about how they feel “because of what’s happened to Liam Neeson”.

I guess I’d say to him: “Don’t worry. People absolutely can still talk at the highest level about their intention to commit racially motivated homicide, because, really, nothing has happened to Liam Neeson. He has movies in pre-production, production and post-production.”

On second thoughts, I would make it clear that WHITE people can still talk about this stuff. I don’t want to be liable for anything that might happen to … the others … if they pull this shit.

Which reminds me, the way this whole thing is now skewing, I am anticipating significant engagement from grateful representatives of The Black Community, which I see as a homogenised entity. What I would say to it – the black community, I mean – is that flowers or muffin baskets are more fuss than Liam would be comfortable with. In many ways, he’s a very traditional man, would you believe.

“So, I understand that you want to express gratitude for a) not being killed by him back then; b) the healing power of powerwalking; and c) the fact that Liam has Started A Really Important Conversation about people wanting to violently murder you simply for being black. But the best way you can do this is by simply thanking him for his service. I will consider opening an appreciation book in each of your neighbourhoods/areas/whatever for you to pay your respects.”

Wow – I almost miss the storm now it has basically passed! Still, the lull has given me a chance to meet with the producers of Taken 4, who have harnessed The Started Conversation in an incredible way. I know we’re highly comfortable with Liam taking vengeance on poorly caricatured Albanians or whatever, because that’s what most of the earlier movies in the franchise were about. But, this time, they want him to kick it up a gear. This time, he faces up to a new, much more ruthless and uncompromising enemy. These guys appear to operate completely above the law, they specialise in getting away with it, their power is unimaginable, and their criminal masterstroke is brainwashing people to think they are victims in situations they totally perpetrated. Yes, they are The White Guys of a Certain Age – and I’m delighted that Taken 4 may now be considered officially in development.