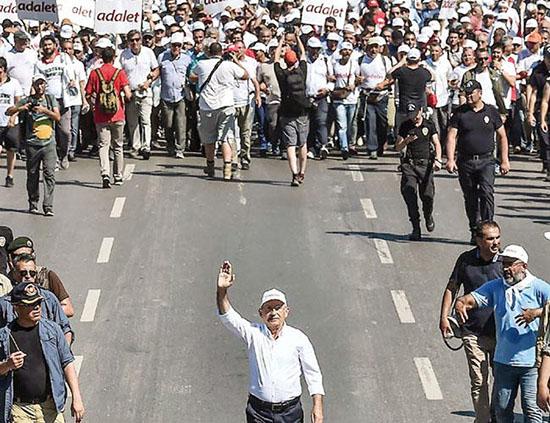 Twenty-seven suspects, including a senior member of ISIL, have been handed down lengthy prison sentences for planning attacks on a convoy of the main opposition Republican People’s Party’s (CHP) “justice march” in 2017.

Oğuzhan Korkmaz, known as one of ISIL’s leaders, was given a prison sentence of 14 years, seven months and 15 days, while the other 26 defendants, who were tried in the same case, were handed down sentences ranging between 21 years and four years for plotting the attack on the CHP’s 400-kilometer march from the capital Ankara to Istanbul.

Korkmaz was accused of planning to plough his car into the participators of the CHP protest.

Tens of thousands of people had joined CHP leader Kemal Kılıçdaroğlu on his 425-km (265-mile) march from Ankara to Istanbul. The leader had called for the protest after a deputy from his secular CHP was jailed on espionage charges.

At the time, Kılıçdaroğlu warned that the “justice march,” which grew into a wider anti-government protest, could be targeted by “provocations” as it approached Istanbul, where it ended with a mass rally.