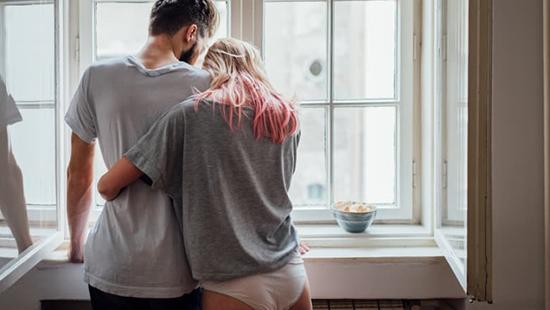 At 16, my perfect man had to be able to carve through powder and slalom on a waterski. At 20, I wanted a classical musician or a maverick politician. At 25, I would go for a classics graduate from a top university or a professional golfer. Someone to teach me things, give me books to read and turn me into a sponge.

At 30, he had to have a clear career plan, show fierce ambition in the most modest way possible and agree without further comment when I ranted about my father’s attitude. At 35, it was preferable for him to be able to tell funny stories and entertain the gallery. At 40, he had to be a virtuoso. And at 50? Who is the perfect man for a young 50-something?

THE PERFECT MAN IS AN EX

The relationship ended on a stupid pretext many years ago and your ex still remembers you when you were young and pert. You knew each other, you liked each other, you know it works, the reasons it stopped working are no longer relevant, so why not? An ex saves time.

Perhaps you could have lunch with him on a regular basis, so as to keep in contact, or simply to keep an eye on his current relationship. This contact will allow you to gauge an abstract possibility, something undefinable and reassuring, that you can file somewhere amongst the information in your mental “cloud”. A sort of emotional fallout shelter. Your ex exists, hidden away somewhere, and that’s good to know. After a certain age, starting a new relationship isn’t easy, but restarting an old one …

THE PERFECT MAN IS THE SAME AGE AS US

For preference, he should be someone from your own age bracket, which isn’t always very easy to find when you’re coming back to market quite late in the day. The advantage of belonging to the same generation is of being part of the same world. We know the old order, we’ve lived through the same revolutions. This shared understanding makes for some nice rallies. You can smash it into the corner, one bounce is all it takes, and the ball comes back.

In terms of health, a couple from the same generation share the same energy levels, similar periods of fatigue and down time, encroaching rheumatism, creaking joints, crumbling teeth, hearing loss, the discovery that whole sections of the masonry of our memory have collapsed … They are particularly sensitive to the other’s needs and tolerant of the subjects we don’t like to talk about – colonoscopy, hair loss, prostate, dental implants – which are outlawed in relationships with an age difference.

THE PERFECT MAN IS KIND

Because kindness is fashionable and comes at the top of the list of required qualities, the perfect man for a woman in her 50s is a nice guy. What we once took for weakness has acquired shades of nobility. First impressions can be supplemented by a few second opinions, but watch out for advisors and the light-fingered. If there’s a perfect man knocking about, your rivals are bound to be prowling around him already, armed with a butterfly net.

THE PERFECT MAN IS SEDUCTIVE

He’s not the most handsome, but you look at the perfect man and you like what you see. If he doesn’t have all the aforementioned qualities, it’s not too much of a problem. The simple fact that you fancy him cancels out certain qualities that you would never have imagined being able to overlook on an empty stomach. But even so, be sure to get your hands on the low-down of his services rendered. Seductiveness can be treacherous.

Sometimes, steering well clear of a man who is too obviously appealing is a sensible course of action.

THE PERFECT MAN IS NOT ON SOCIAL MEDIA

He keeps his narcissism to himself. At worst, he’s a passive user, at best, he’s not on Facebook or Instagram and doesn’t tweet either, because he’s not involved in politics and doesn’t have anything particular to sell. Nor is he on LinkedIn, because he’s not looking for clients or for work. He already has a job, and he knows very well that at his age (the same age as you), that’s not the way to go about finding one.

THE PERFECT MAN HAS DEALT WITH HIS PROBLEMS

The perfect man is divorced. His past life is finished, digested and tidied away somewhere in the cellar. There’s nothing worse than living to a schedule of delayed divorce-court rulings and maintenance payments still to be negotiated.

For a long time, the perfect man went to bed early with the same woman. Perfection demands that she was the guilty party, who left him after time took its toll. Once the surprise had worn off, and the awareness that he had also been bored in their relationship had dawned, the perfect man was relieved. So he stayed good friends with his ex. The details of the divorce were settled over a good bottle, with the division of assets scribbled down on the corner of the paper tablecloth, which they simply handed over to their shared lawyer.

THE PERFECT MAN IS A WIDOWER

On the face of it, I wouldn’t have spontaneously come up with this. We’re cynical, yes, but like to keep things elegant. And yet a conversation with a friend got me thinking.

At 55, Lauren had been single for three years. Her husband had left after 25 years, the day after their last child got his degree. Since then, he’d been writhing in the arms of a 30-year-old Ukrainian. For her, it was as if he was dead, but even crueller. If he was dead, at least she’d have a pension, she told me half-seriously.

Shortly after, when it was her children’s turn to leave, she told herself it was time to find a new companion. She went through the people she knew, in vain, and then spent a bit of time on a dating site.

At first it was funny, then disappointing, and she ended up getting hurt several times. Between the eternal bachelors never ready to settle down, the men whose divorce will never be settled, and those who are still sleeping with their ex-wives, Lauren explained to me one evening that the market was paralysed, before triumphantly exclaiming: “Who’s available and has no ex-wife to get in the way? A widower!”

Widowers are rare and highly sought-after commodities. In the race for the perfect man, a widower is a good bet for a place, or even a win. They have many things going for them: they’re available, don’t pay maintenance, and might even have ended up with a bit of an inheritance.

With a little luck, his children will be grown up, and with even more luck, Madame tip-toed off stage without a heart-rending story, just one of those stupid things, sudden but not violent, that can happen to anyone at any time.

Be warned: there is only a narrow window for bagging a widower, the slightly vague period between when his mourning ends and his social resurrection begins. After that, you can be sure he’s already spoken for.

The brooding widower you’re hoping to console is only weighed down by one thing you can’t fight against: his memories. Initially, you’ll have to put up with this.

But once you’re settled in, you need to subtly deconstruct the decorative influence of the absent woman, who’s a bit too present for your liking. If by chance your new squeeze has left a mysterious urn in pride of place on the mantelpiece, you’ll have to think about letting it go. But how? Moving a piece of furniture is easy, repainting the kitchen is doable, getting rid of a chandelier or a carpet he bought with Her in Iran isn’t impossible. You can always put it on Gumtree and tell him one day it went for an amazing price.

However, even on eBay for a token price, the urn from the mantelpiece is going to be hard to offload. I can imagine the listing: “Urn for sale, barely used, nearly new – sober, contemporary design, would suit any style. Offers accepted.” Having her disappear from his life for a second time without consultation isn’t fair play, and neither is relegating her to the cellar.

THE PERFECT MAN DOES NOT HAVE A BEARD

There’s a reason for the way men wear their facial hair. That it’s become non-negotiable by this point is irritating, and not just to the cheeks. More than a fashion accessory, beards have now become the touchstone of the most endemic herd-following behaviour.

Beards project an image somewhere between virility and affectation, and for a long while I wondered what to think. I think I was waiting until I was sure of my judgement on the subject. After all, our opinions can change, sometimes radically. There was actually a time when I liked blond men with highlights and shoes with pompoms.

For men over 50, beards are only acceptable if they’re not white, or even grey, which is problematic as these areas are the first to go. Otherwise, it’s an absurdity. The same goes for dyeing it, and if that’s what you’re doing boys, you’ve gone through the looking glass. In the time it takes to grow a beard, I see dashing, funny 50-somethings suddenly transform into hairy old ashtrays. Not to mention the state of our skin if the ashtray decides to try anything more than a kiss on the cheeks.

This is an edited extract from Why French Women Feel Young at 50 … and How You Can Too (Hachette Australia) by Mylène Desclaux, out now.

This article appears in Sunday Life magazine within the Sun-Herald and the Sunday Age on sale February 10.