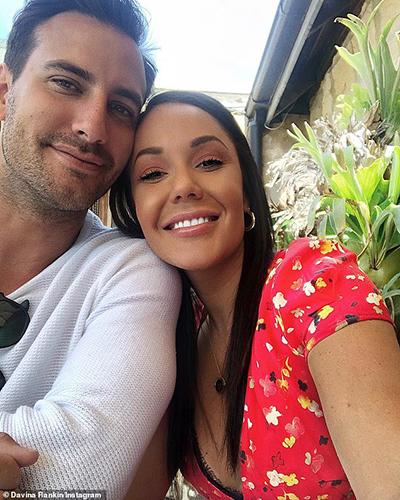 It’s one of the biggest television shows in the country, with an average audience of over one million per night, but one person avoiding all things Married at First Sight is last year’s most talked about contestant.

Cyrell’s brother Ivan blows up over her decision to marry a stranger. Vision: Married At First Sight on Nine.

Davina Rankin, 27, owner of the We Love Brunch Co, can’t bear to watch the Channel Nine reality hit as she “can see right through the bullshit”.

“So far I have only caught five minutes of each show while I am cooking dinner before I turn it off but I can already pinpoint who the [new] Davina is and who the Sarah, Telv and Ryan are,” she said.

Last year, Davina was castigated for meeting up with Dean Wells, husband of Tracey Jewel, behind the back of her on-screen husband Ryan Gallagher. The pair made a secret pact to leave their respective partners, but Davina was left in tears when Dean backed out at the last minute.

Ines Basic, 28, a legal assistant who came to Australia as a child refugee having fled war-torn Bosnia, is the irrefutable “villain” this time around. And while it may seem like she has few redeeming qualities after the first thing she said to her husband Bronson Norrish at the altar was a critique of his eyebrow piercing, Davina wanted to remind viewers that the recipe for success of reality TV is manipulation.

“It’s fantastic that there is a Davina this year, it takes the heat off me,” she laughed.

“Remember, we are guided in a certain way [by producers] … so they could be just showing her worst bits.”

Ines has received a social media backlash so severe that Nine, the publisher of this masthead, has had to disable comments on the posts featuring her on the official MAFS Instagram account – and she’s not available for media interviews this week.

Having been on a similar receiving end, Davina has some advice for her stablemate.

“I got myself out of doing a lot of publicity when I started getting labelled the villain, which was good and kept me out of that spotlight,” she said.

“Staying quiet was the best thing I could do. I tried my hardest to stay away from social media too. If you can’t look at the trolls, switch them off. If it is getting to you, walk away.”

On Sunday night’s show, Ines is shown texting Sam Ball, husband of Elizabeth Sobinoff, with a wife swap on her mind, in scenes that play out like a déjà vu of Davina and Dean last year.

But Davina said, in her case, it was orchestrated by producers.

“Dean was told, ‘OK, get your phone out and get ready to text now,’ and I was told the same and when to text with cameras and lights on us,” Davina said.

“I never even kissed Dean … we were like guinea pigs, but instead of spinning on a wheel we were spinning in the one spot.

“I think they match people for the drama with maybe one couple for love.”

“For a dinner party, for example, you are ready by 10 am, we get to the venue at 4pm and they don’t start filming until 7pm,” she said. “There is a lot of waiting around not talking, because they don’t like us to talk until the cameras are on us. People are mentally exhausted, tired and hungry.”

“I walked down the aisle six times to get the shot, for our first dance there was no music.”

Davina doesn’t regret her time on the show, and is currently happy in an almost one-year relationship with Jaxon Manuel, and running her networking brunches for women in Queensland, with one coming to Sydney soon.

The possibility of finding love while being paid $150 a day may sound alluring, but Davina has some advice for anyone considering MAFS.

“Do not sign up for reality TV,” she warned.

“People can ruin their lives. You have to sign a year-long contract … and Nine basically owns you. You sign your life away for a year [the length of the contract] once you sign on that dotted line.

“Go on Tinder instead – you will meet someone better,” she laughed.

She keeps in touch with all of last year’s contestants bar one – her on-screen ex-husband, Ryan.

“I don’t think anyone talks to Ryan – he is different,” she said.

“There’s a better, hotter versions of him this year, so he will soon fade away.”

Burst Your Balloon By Lucine Kasparian