We are reaching a turning point that will forever determine our future — how we live our lives and how our children will live theirs.  The gap between the ever-widening left and right has never been wider, and yet amazingly it continues to widen.

Every time we turn on a TV, open a laptop or listen to the radio, another bizarre, offbeat, outlandish idea brings us closer to socialism and the destruction of capitalism. And it is being pushed by the left.

So you have a decision to make. Do you want to live in a country where no matter how hard you work, no matter what you do or how much you succeed, you simply won’t improve your lot?

Do you want to benefit from your own success or would you prefer to let the government take over and use your benefit to pay everyone else?

In the last few weeks, the left has removed its moderate mask to show its true socialist colors as they cheer laws that allow for the killing of babies already born and born alive, giving the mother the right of a thumbs up or thumbs down like an emperor in the Roman Coliseum. And almost every one of the 2020 Democratic presidential candidates supports the New Green Deal proposed by a freshman congresswoman so knowledgeable about Washington that she thinks she came here to sign bills! And her New Green Deal will literally pull planes out of the sky.

No issue, I guess, since the left is happy with the influx coming in through our southern border. No air travel required for them.

This Green New Deal is supported by Senators Cory Booker and Kamala Harris, by Senators Sanders, Gillibrand and Warren and requires that every building in America be rebuilt for environmental reasons and that high-speed rail be developed so that air travel becomes unnecessary.

The New Green Deal foresees Medicare for all and considers a deficit not that big of a deal, because, according to Ocasio-Cortez, we can just print more money.

You know what? You should have left your Monopoly game home when you came to Washington, Ms Ocasio-Cortez.

But my favorite part of the New Green Deal is where they seek a net zero greenhouse gas in 10 years.

So you may ask why “net zero” as opposed to zero? The reason is that they are not sure they will be able to get rid of bovine flatulence. I can’t believe I just said that — aka, cows farting.

These emissions from cows are of concern to the left because these bovine emissions have an environmental impact and the methane gas produced by the bovine flatulence contributes to the greenhouse gases that contribute to global warming.

And their hypocrisy. It knows no bounds as they hang on to dear life — political life, albeit — in the State of Virginia where the governor and the attorney general dressed in blackface and the governor comes out and says that he is now going to explore the issue of white privilege and pursue an agenda of racial reconciliation. — Talk about trying to deflect an issue from yourself to everyone else. And he even says it was a terrible week for Virginia. –No, governor, it was a terrible week for YOU!

And now, Lt. Gov. Justin Fairfax is accused of forcible sexual assault and forcible rape. Although the date of one attack was 16 years ago and the other 15 years ago, the victims each have very specific recollections. One has classmates who corroborate her immediate outcry that Fairfax raped her. One victim remembers the date, the time, the place, and telling her classmates.

One involves a doctor who says that she was forced to perform oral sex on Lt. Gov. Fairfax, and although she did not bring it up until years later, it’s a far cry from the demands of the left that Brett Kavanaugh remove himself as a candidate for the Supreme Court for something that allegedly happened more than 35 years ago with an alleged victim who didn’t remember where it happened, when it happened, and who never reported it to anyone. Fairfax’s victim has the date, place, time.

So what I want to know is, where are the Democratic senators who turned the Constitution on its head for Kavanaugh saying that all women need to be believed?

Now where are all the women in their pink hats? Where are the women who suffered sexual assault storming the doors of the Capitol during the Kavanaugh hearings?

Where are those women, who refused to allow the elevator door to close in the Senate as they had a fit and sought to blame Brett Kavanaugh for their own distress?

This is a group of people that actually sits on their hands when the president of the United States says he wants to stop human trafficking.

A group that sits on their hands when the president says he wants to end childhood cancer.

And they sit on their hands when he says he wants to have a plan to eradicate AIDS.

Who are these people? They are people who are more hateful of one man, our president, that it matters not that he wants to protect babies or stop human trafficking or eradicate AIDS.

I’ll tell you who they are. They are people who don’t care about us. They only care about power and making sure that they keep it.

And, for all of you who can’t make sense of why normal thinking people would not support a border and not care if illegals including MS-13 members come into our country, you need to understand that this group knows that they have lost Americans and their only hope is to get immigrants and illegal immigrants into our country so that they can maintain their power base.

And if you think socialism will never happen in this country, just take a look at what has happened in the last 10 days and ask yourself that question one more time.

Jeanine Pirro currently hosts Justice with Judge Jeanine (Saturday, 9PM/ET). She also serves as a legal analyst for FOX News Channel (FNC) where she provides legal insight across the network’s programming. She joined the network in 2006 and is based out of New York. Click here for more information on Jeanine Pirro. 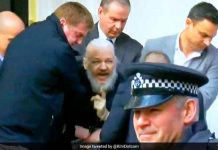