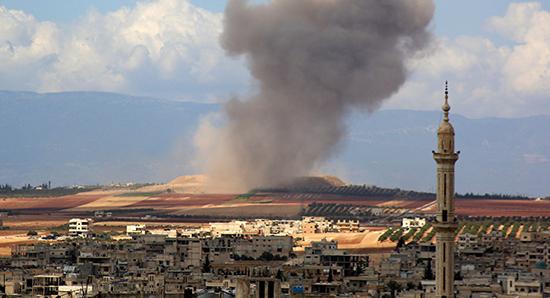 Bethan McKernan in Istanbul – The Guardian

In Syria’s Idlib province, the dust has largely settled after last month’s dramatic takeover of the area by al-Qaida-linked fighters. As a result, however, international organisations have withdrawn aid and support for schools and hospitals – and Idlib’s 3 million residents are beginning to feel the pinch.

Idlib, the last pocket of Syria that remains outside President Bashar al-Assad’s control, was spared an assault by the regime and Russia last autumn, after an 11th hour truce brokered by Moscow and Ankara.

The ceasefire has more or less held – but hinged on the disarmament and withdrawal of the Tahrir al-Sham (HTS) umbrella group of hardline fighters from a buffer zone.

Instead of retreating, however, HTS grew bolder, and on 10 January declared it had forced other armed groups in the area into a surrender deal, effectively cementing its control of the entire province.

And since HTS is considered a terrorist organisation by most of the international community, concerns over aid funding being diverted by the group has led several major donors to cut desperately needed funding to the area.

Idlib and rural Aleppo are served by about 50 medical facilities, where salaries, medicine and equipment worth hundreds of thousands of dollars have been financed by non-governmental organisations and western governments.

Now, however, medical staff in several places are working for free, as are teachers.

“It is an unsustainable situation,” said a Kafranbel resident, who asked not to be named for fear of retaliation. “All the private universities have been closed because they refused to be attached to the HTS-controlled higher education council. Courses in religion, tailored by them, are now compulsory. If any student or professor speaks out, they are dismissed or taken to prison.”

Checkpoint fees for vehicles carrying food and goods from regime areas or Turkey have soared, with the costs passed on to consumers, several people said – and residents fear that dissenters will be arbitrarily arrested and tortured.

Several people across Idlib expressed fears that an emboldened HTS could trigger the regime offensive that was staved off by last September’s ceasefire deal. Last year, aid agencies warned that a large-scale assault on Idlib could cause one of the worst humanitarian crises in Syria’s now eight-year-old war.

The area’s population has grown from 1 million people in 2011 to approximately 3 million people, swollen by waves of Syrians from areas newly retaken by Assad including Aleppo, Ghouta and Darayya, bussed there by the regime.

In the event of an offensive, they now have nowhere else to go, unless Turkey is willing to reopen its border to refugees.

Last week, the group’s leader, Abdurrahim Attoun, conspicuously refused to deny HTS is planning to merge with other armed factions and take control of the crucial M5 highway, the economic artery that used to link Damascus to Turkish markets.

Such a “high-stakes gamble” would likely irk Assad, said Sam Heller, a senior analyst with the Brussels-based International Crisis Group.

Russia, too, has shown signs of impatience over Idlib, demanding once again on Thursday that Turkey – which backs Syria’s opposition groups and is guarantor of the ceasefire – do more to tackle the HTS presence there.

“The Russian position is less predictable, and likely hinges on international horse-trading over Syria’s north-east and the outcome of the next meeting of the Astana guarantors [Russia, Turkey and Iran].”

Donald Trump’s surprise decision last December to withdraw the 2,000 US troops stationed in Syria’s Kurdish-held north-east has potentially opened a new chapter at a late stage of the conflict, and is likely to have repercussions for Idlib.

The Russian president, Vladimir Putin, along with his Turkish counterpart, Recep Tayyip Erdoğan, and the Iranian president, Hassan Rouhani, are due to meet in the Russian city of Sochi next week, where they are expected to discuss Syria.

In Idlib, many are worried about what foreign powers will decide for their futures – but are also increasingly preoccupied with the difficulty of putting food on the table and buying fuel to warm their homes.

“I am focused on surviving right now,” said Mahmoud Abbi, who worked for the free Idlib police before the group disbanded after the HTS takeover. “We need jobs and we need the NGOs to resend funds for our medical and education sectors. This is a slow-motion crisis and it doesn’t need to happen.”