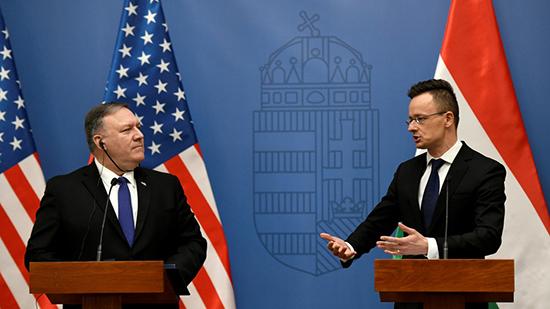 US State Secretary Mike Pompeo’s quest to scare Hungary away from dealing with Russia and China appears to have turned sour, as Budapest said it’s fed up with lectures about its foreign policy.

Pompeo is on a five-day massive charm offensive in Eastern Europe seeking to “make up” for the time the US “shunned”the nations of the region “in a way that drove them to fill a vacuum with folks who didn’t share our values,” as he himself put it.

His first stop was Hungary, a country that no US State Secretary had visited since 2011. And Budapest has been dangerously leaning towards Moscow and Beijing, according to Washington.

“We must not let [Russian President Vladimir] Putin drive a wedge between friends in NATO,” Pompeo stated passionately, at a joint press conference with the Hungarian Foreign Minister Peter Szijjarto, claiming that the US and its allies “know all too well from history” that “that Russia will never be a friend to the freedom and sovereignty of smaller nations.”

He did not focus his attention solely on the Kremlin, though, and promptly warned his Hungarian counterpart about the dangers of working with China, by saying that “Beijing’s handshake comes with strings … that will leave Hungary indebted both economically and politically.”

Szijjarto retorted to Pompeo’s lecturing that “the world is not going to be a better place if some countries spend their time intervening in the internal political affairs of other countries.” He insisted that Budapest can have transparent relations with Moscow and Beijing and the West, and said it was an “enormous hypocrisy” that Hungary is singled out for its ties with Moscow.

“Cooperation with Russia or China that does not harm us,” he added, explaining that any such economic ties do not make Hungary a less reliable NATO partner.

Pompeo’s trip to Eastern Europe comes after US withdrawal from the landmark Intermediate-Range Nuclear Forces Treaty, which might have soured relations between the US and its allies across the Atlantic, as it revived the possibility of a new arms race and greatly raised the stakes of a potential standoff between Washington and Moscow in Europe – especially at the expense of the European states.

The trip looks like a massive lobbying campaign aimed at advancing the interests of Washington as well as those of the all-powerful US military industrial complex. Budapest has pledged an unspecified deal to buy more US-made weapons.

Pompeo will then go to Slovakia, which recently “selected the F-16 as its next generation fighter.” He will also visit Poland, where he will, among other events, take part in a conference on the Middle East, an effort to build a coalition against Iran.

Pompeo is also trying to discourage European nations from even thinking about working with the Chinese telecoms giant Huawei in developing their national G5 networks, as Washington and Beijing are, apparently, involved in some sort of a turf war.

“We want to make sure we identify [to] them the opportunities and the risks of using that equipment,” Pompeo told journalists in Budapest, speaking of the expansion of Huawei Technologies.

Uighur whistleblower: China is ‘arresting people without any reason’