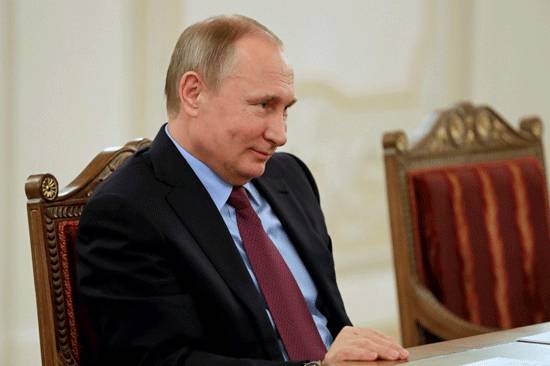 Turkish President Recep Tayyip Erdoğan arrived in freezing Moscow last month to meet his Russian counterpart Vladimir Putin. It would have looked like just another summit between two strongmen who have much in common if not for the fact that it took place against the backdrop of worsening US-Turkish ties and a new wave of Russian expansionism sweeping across Asia and the Middle East.

Erdogan, irked by US sanctions, clearly felt comfortable in the company of “his old friend:” Russian-Turkish trade turnover has increased sharply and will soon climb to US$100 billion, while Russian tourists to Turkey have reached a record number of six million, Putin noted.

But it was not just about economics. For Putin, it was another chance to showcase his increasingly assertive vision of a Moscow-centered Eurasian alliance that confronts US and Western interests.

Turkey, a NATO member that for many Cold War years confronted the Soviets, still accommodates American assets at the Icirlik airbase and controls access from the Black Sea to the Mediterranean via the Bosporus. All this makes Turkey worth wooing.

Ankara’s purchase of a Russian S-400 air defense system caused dismay in Washington, which tried to derail it by offering Patriot missiles instead. The S-400 contract, worth $2.5 billion, was signed in December 2017 and four batteries are expected to be delivered from July.

“The US has attempted to force Turkey to abandon defense industry cooperation with Russia,” said Ruslan Mamedov, a Middle East expert at the Russian International Affairs Council. “But the Turks are determined to make a decision on their own.”

Certainly, Moscow has points of contention with Ankara. In the Syrian conflict, Russian objectives – propping up Damascus and retaining influence in Syria and beyond – are barely aligned with Turkey’s. Then there’s Armenia, where Russia has deployed 5,000 soldiers and weaponry in two bases on Turkey’s border, to Erdogan’s discomfort.

Yet Moscow and Ankara are clearly cozying up. The leaders’ friendship plays a role, tensions with the West play another.

Moscow may lack the capital resources and global brands of its competitors, but Putin ambitiously seeks to restore Russia’s Cold War role as a global player and as a promoter of Eurasian integration. Armed with pragmatism instead of communism, Putin is reinforcing traditional Russian “zones of interest” and winning new friends by wielding energy, weaponry and a hearty dose of anti-Westernism as viable policy instruments.

Turkey is only one of the Kremlin’s Middle Eastern priorities. In Syria, Moscow is keeping the Bashir Assad government afloat and seeks to speed up reconstruction. Syria is Russia’s biggest regional ally and its naval balcony onto the Mediterranean.

Gulf States also play a role. Case in point: Putin’s remarkable rapprochement with the Saudis. For decades, Saudi Arabia had thorny relations with Russia, but Putin is on friendly terms with Saudi royals, including its controversial crown prince.

In 2007 Putin visited Riyadh on the first official visit for a Russian leader and met King Abdullah there. Ten years later, in 2017, King Salman made an unprecedented, historical visit to Moscow, bringing a huge 1,500-strong delegation.

But the real chemistry was ignited when Putin and the Saudi ruler sat side-by-side at the World Cup opening ceremony in Moscow. Saudis now closely cooperate with Russians in various areas – regional security, trade, transportation, but above all, energy and arms sales.

With world oil markets a top priority for both sides, discussions on Saudi Aramco’s possible participation in Novatek’s Arctic LNG 2 project, as well as Saudi investments in Russian projects, made headlines. Weapons deals worth about $3 billion are reported to have been struck.

Those envisage local arms manufacturing in the kingdom and the possibility of a technology transfer of Russian anti-tank missiles, rocket launchers and even S-400 missiles.

When Gulf States quarreled with Qatar, breaking off ties including air links with Doha, Kremlin envoys and diplomats surged in, reassuring Qataris that Russia stood firm. Relations soared after the 2018 World Cup, and with the next World Cup in Qatar 2022, an “army” of Qatari officials toured Russia to learn.

They were notably impressed by fan zones and a “fan ID-Card” personal tracking system that they plan to copy. Russian tourists now enjoy visa-free entry to Qatar. These are impressively pragmatic maneuvers by Putin, given that Qatar had previously supported Chechen separatists against Moscow.

Unusually, Moscow also enjoys amicable links with the region’s two fiercest competitors. “Russia’s role in the region will keep growing,” Vladimir Fitin, a Middle East expert at the Russian Institute of Strategic Studies, a pro-government think-tank, said. “Russia’s ties to the region’s main rivals, Saudi Arabia and Iran, will only rise in 2019.”

Iranian-Russian relations were spotlighted during Putin’s visit to Iran in November. Iranian Supreme Leader Ali Khamenei, whom Putin met, urged stepped-up cooperation to isolate the US.

In trilateral talks, presidents Hassan Rouhani, Putin and Heidar Aliyev of Azerbaijan signed the “Tehran Declaration” that envisions construction of an International North-South Transport Corridor which will connect Moscow to the Persian Gulf. Official opening dates for this vital route have not been announced, but the project is expected to get off the ground by mid-2020.

Moscow also prioritizes powerful ties with Beijing, which provides a prosperous counterparty amid worsening ties with the West.

Oil and gas deals with China are a priority. Alexander Lomanov, Chief Research Fellow at the Russian Far East Institute, notes that ties are “very stable and in fact, there cannot be any sharp changes.”

He points out: “Both countries are likely to further underline ‘bilateral friendship and cooperation’” this year, which marks the 70th anniversary of both the PRC’s founding and the establishment of Beijing-Moscow diplomatic relations.

For Moscow, one effective way to maintain “zones of interest” is through the Shanghai Cooperation Organization. However, due to its massive capital resources, Beijing probably has a stronger voice in that body. As a hedge, Moscow is maintaining relations with China’s adversaries and regional rivals, India and Vietnam.

Arms sales are the tool. Hanoi has acquired Russian submarines, while Delhi is reported to be considering purchasing Russian Su-30 jet-fighters, to be assembled locally. The deal for the Su-30s is estimated to be worth more than $1 billion.

In Africa, Russia needs a long-term strategy to compete with hefty Chinese and EU presences. During the Cold War, almost half of Africa – countries with communist or Pro-Soviet regimes – were in Moscow’s orbit. Those days are long gone. Moscow’s standing on the continent has dramatically shrunk.

Now, the Kremlin is working to make up for three lost decades. The Foreign Ministry is thinking ambitiously. This summer, it plans to bring more than 50 African leaders to Moscow for a pan-African summit, similar to the African summits regularly held by China and the EU.

And according to Russian media, Russian private military contractors are working in at least 10 African countries.

It’s more than rhetoric. Russian planes were spotted at Caracas airport in January, suggesting Moscow was shuttling goods and people. And there were unconfirmed reports of Venezuelan gold reserves stored in Russia being taken to Dubai, where the gold was converted to cash, then returned to Caracas.

All this marks an aggressive expansion of the Kremlin’s global footprint – an expansion that Moscow’s dire relations with Brussels and Washington does not appear to be restricting.