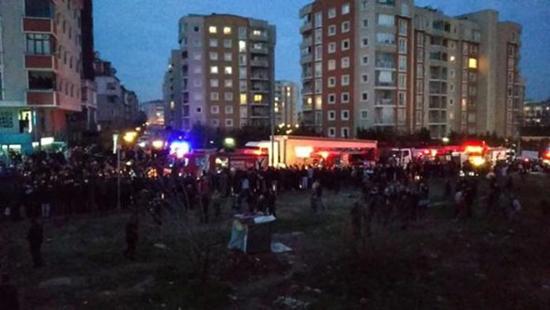 The İstanbul Anadolu Chief Public Prosecutor’s Office launched an investigation into the incident, while an İstanbul court imposed a ban on the coverage of the news related to the helicopter crash.

İstanbul Governor Ali Yerlikaya announced that the helicopter went down while trying to make a forced landing.

The helicopter crashed in an area of apartment buildings in the Çekmeköy neighborhood, Yerlikaya said. Television images showed smoke rising from the area and ambulances rushing to the scene.

There were no civilian injuries or casualties, Yerlikaya told reporters, adding that the cause of the crash was not yet known.

The helicopter was a UH-1, which, according to the Demirören news agency, was scheduled to be retired from the inventory of the Turkish Armed Forces (TSK) next year.

This type of helicopter, a remnant of the Vietnam War, is used mainly for search and rescue, cargo transport and pilot training.

Meanwhile, Mehmet Akif Hamzaçebi, a deputy from the main opposition Republican People’s Party (CHP), tweeted on Monday night that he had visited the families of the deceased officers at the hospital. The wife of one of the officers told him in tears that her husband called her before the flight and said the helicopter had a malfunction, he said.

Hamzaçebi said pro-government media outlets in Turkey would not report that detail in order to cover up the negligence in the incident.