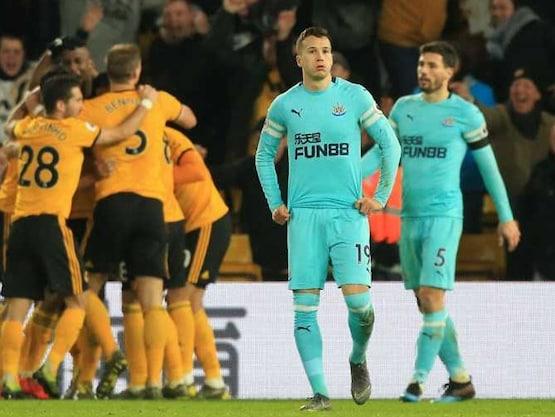 Rafael Benitez’s side were seconds away from a valuable victory after Isaac Hayden’s first goal since 2017.

Newcastle goalkeeper Martin Dubravka damaged his side’s bid to avoid relegation for the second successive match as his late howler gifted Wolves a 1-1 draw on Monday. Rafael Benitez’s side were seconds away from a valuable victory after Isaac Hayden’s first goal since 2017 put them ahead in the second half at Molineux. Hayden’s goal had come via a weak attempted save from Wolves keeper Rui Patricio. But it was Dubravka’s clanger at the other end that stole the headlines when the Slovakian allowed a cross to slip through his grasp as Willy Boly headed home deep into stoppage-time.

Dubravka will be public enemy No.1 on Tyneside after his latest gaffe, which came just days after he let Son Heung-min’s shot squirm through his legs to give Tottenham a late winner. With controversial Newcastle owner Mike Ashley watching from the stands, it was a bitter pill to swallow for Benitez, who refused to protect Dubravka when asked about the equaliser.

“We could do better. These kind of balls you can do a little bit better, punch the ball and it’s finished,” he said. Asked if he thought Boly had pushed his keeper, Benitez added: “It was not very clear watching the replay. Still, it’s something we have to defend better. He (Dubravka) has to be strong enough.

“I was not happy with some decisions, but overall I think the referee was fine. You cannot complain about that.”

Newcastle are now only one point above the relegation zone when they would have been three points clear but for Dubravka.

Back from a warm-weather break for a training camp in Marbella, seventh placed Wolves looked like they were still on the beach when Newcastle’s Salomon Rondon was granted too much space for a low shot away that forced Patricio into action.

Wolves eventually hit their stride and made a vigorous appeal for a penalty when Christian Atsu challenged Raul Jimenez, only for referee Graham Scott to wave play on, with replays suggesting he made the right decision.

He was close to making that milestone when he cut in from the left and unleashed a powerful strike that Dubravka pushed away.

Sprawling to keep out Jonny’s effort soon after, Dubravka was doing his best to redeem himself after his mistake against Tottenham.

Against the run of play, Newcastle snatched the lead in the 56th minute.

Hayden was played in by Fabian Schar, but his shot should have been saved by Patricio, who was beaten at his near post after weakly palming the ball into the net.

Wolves tried to mount an immediate response and Diogo Jota’s low strike was well saved by Dubravka, who also kept out Leander Dendoncker’s header soon after.

And it seemed Wolves’ pressure would be in vain, until Dubravka ended up as the villain yet again in the 95th minute.

Adama Traore’s high cross hung in the air for an age, but Dubravka reacted hesitantly, allowing the ball to fall through his arms and hit Boly in the face before rolling into the net for a farcical equaliser.