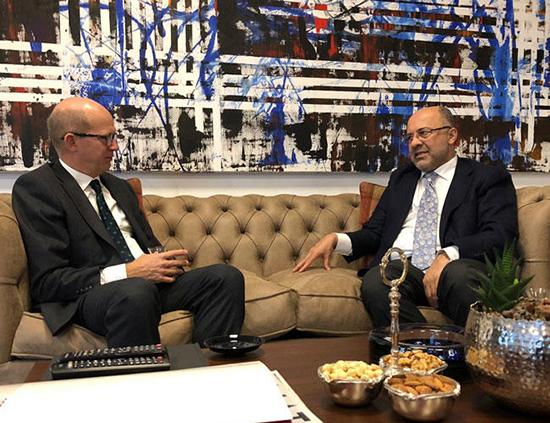 United Kingdom Ambassador to AnkaraDominick Chilcott visited DemirörenMedia headquarters in Istanbul on Feb. 11 to exchange views on bilateral relations between the two countries and the situation of media in Turkey with chief executive Mehmet Soysal.

“A strong Turkey means a strong partner for the U.K.,” the diplomat said, adding that his country would never like to see a weaker Turkey.

He said the U.K. is spending efforts to change a negative public opinion look on Western countries.

Soysal, also the executive board director of Hürriyet newspaper, for his side said Turkish people wanted good ties with the West.

But Western countries “should not embrace the PKK, FETÖ or similar terrorist groups,” he added.

“As Demirören Media Group, we do not adopt an approach that instigates conflicts. We want peace for the whole humanity, starting from our Turkish nation, and our publications sit on this basic principle,” he said.

The diplomat, a Fenerbahçe fan, and the chief executive, who had served as a deputy chair at its rival Beşiktaş, did not miss a chance to talk about football, wishing good luck to each other.